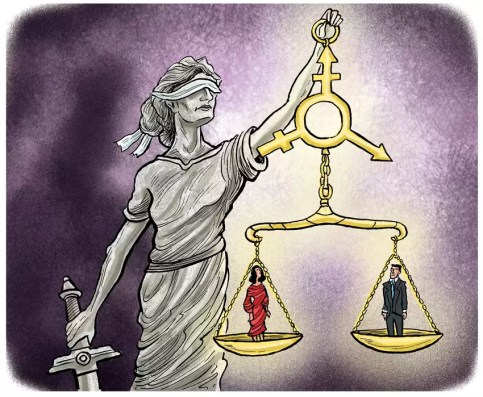 The Indian legislature has so far taken a feminist glance over the existing legal framework and has come up with statutes in conservation and recognition of women’s rights. Be it the Amendment of The Indian Penal Code 1860 (“the Penal Code”) to include sexual offences or the broadening of the definition of rape, or the passage of The Sexual Harassment of Women At Workplace (Prevention, Prohibition And Redressal) Act, 2013 (“the POSH Act”)- the position of an Indian female with respect to adequate harassment laws is better than ever. But this results in an imminent bias against the male and transgender population who often face the same situation. All statutes relating to sexual harassment treat the woman as the victim and the man as the perpetrator. This attribution disregards the position of all other victims, in derogation of their rights to equality and dignity as mandated by The Constitution.

The POSH Act enshrines the ingredients of sexual harassment, namely, physical contact involving sexual overtures, or, the demand for sexual favours, showing of pornography against will, or making sexually coloured remarks. Section 354A of the Indian Penal Code, 1860 defines the act in similar terms, making the men and the women the sole perpetrators and victims respectively. On a harmonious interpretation of such section, it can be pertinently noted that not only females but males can also fall prey to such overtures. Studies have affirmed that 19% of the men have conceded to being subjected to workplace harassment with a 51%, 31%, and 28% harassment rate in Bangalore, Delhi, and Hyderabad respectively.

This comes off as a further derogation of the rights of the transgender community. Even after the recognition of transgenders as the “third gender” and the passage of the Transgender Persons (Protection of Rights) Act, 2019, the non-inclusivity of transgenders in the penal statute for protection against sexual violence amounts to a clear derogation of Section 9 of the Act which prohibits workplace discrimination in any form. In a plea filed before the Apex Court, the petitioners alleged that such statutes discriminate against the third gender violating the rights to equality, equal employment opportunity, and dignity under the Constitution.

The only protection enjoyed by “all adults”, irrespective of sexual orientation, is that against non-consensual sexual acts under Section 377 of the Penal Code. This proves that the  Penal Code rescues indiscriminately only if there is a penetrative sexual assault transgressing a person’s bodily autonomy while leaving no scope for any other factor. Even though the POSH Act faced certain oppositions during the legislative process, the Parliamentary Standing Committee in 2011 recommended that the law remain gender-specific because of the precedents of the women being subjected to workplace harassment.

Article 14 of the Constitution invalidates class legislation unless there are an intelligible differentia and a reasonable nexus with the object that such legislations try to achieve. The POSH Act can be a valid case of class legislation, with an aim to improve the participation and security of women in the workplace, but not the Penal Code. Through its gender-specific approach on matters relating to sexual harassment, it stands in clear violation of the rights of all other people belonging to the same class- the class comprising of the victims of sexual harassment.

There is a dying need for an overhaul of such redundant patriarchal laws in order to make the definition of sexual harassment more inclusive. The term “sexual harassment” needs to be given a constructive interpretation drawing inspiration from the Title VII of the Civil Rights Act of 1964 and the Equal Employment Opportunity Commission’s definition where workplace sexual harassment is defined in similar lines as the Indian system, with the exception of it being applicable to any individual irrespective of their sex. The International Labour Organisation’s global convention, iterating the importance of bringing all workers irrespective of their sex, job profile, employment terms under the ambit of sexual harassment laws should be effectuated in the Indian legal scenario making the employer liable for making sexual advances towards their employee during the course of employment as it is violative of their right to dignity under Article 21.