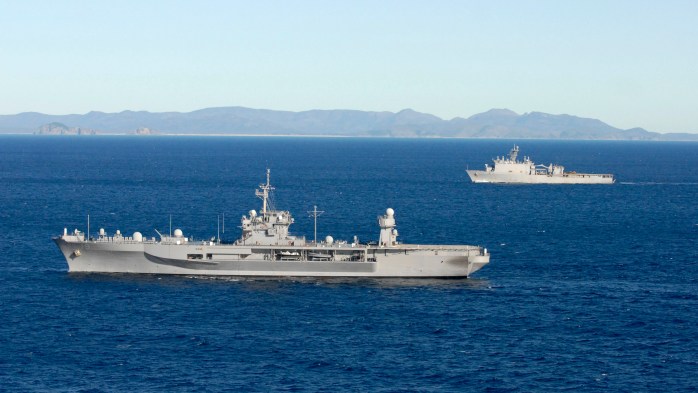 The USS Blue Ridge is the flagship of the U.S Navy’s 7th fleet, overseeing all American maritime operations in Asia and the Western Pacific. It is the U.S Navy’s second oldest active duty vessel and has survived the Vietnam as well as the Cold war.

The Blue Ridge has little firepower but as the floating headquarters for the 7th fleet, it is loaded with advanced communication gears so, that it can track and command the fleet’s formidable assets. This comprises of approximately 60 warships and submarines manned by a combined 20,000 sailors performing missions in the Pacific and Indian Ocean.

The 7th fleet is led by a three star admiral supported by a command staff of about 200 personnel assigned to the Blue Ridge. The ship spends about half the year docked at its home port in Yokosuka, Japan and the rest making rounds across Asia.

In a case, which ranks as the worst corruption scandal in American Navy history, the Justice Department has charged 15 officers and one enlisted sailor, who served on the Blue Ridge with taking bribes from and lying about their association with Leonard Glenn Francis, a Singapore based tycoon, who held lucrative contracts to service U.S. Navy ships and submarines in various Asian ports.

For the better part of a decade Francis systematically infiltrated the Blue Ridge. The details are emerging now after more than four years of Leonard’s arrest.

Between 2006 and 2013 Francis doled out illicit gifts, hosted lavish feasts and sponsored sex parties for Blue Ridge personnel on at least 45 occasions according to Federal court records and Navy documents obtained by The Washington Post.

Francis Company, ‘Glenn Defense Marine Asia’ had a network of informants to feed him the secret itineraries. He then prodded his moles on the Blue Ridge to re-route aircraft carriers and other vessels to ports controlled by his firm so, he could overcharge the Navy for fuel, supplies and services.

Although Leonard offered bribes and freebies to hundreds of U.S Navy personnel assigned to other U.S warships, bases and embassies in Asia starting from the early 1990s, the Blue Ridge was his main target.

For years, when it arrived at a port, the Blue Ridge would be welcomed by a familiar sight on the pier. A beaming Leonard Francis, flanked by a black sport-utility vehicle or limousine and an entourage of comely young women.

His company held Navy contracts to provide everything the crew might need while in port; including fuel, food, fresh water, tugboats, security guards and ground transportation.

But Francis also known within Navy circles as ‘Leonard the Legend’ was renowned for the perks that he provided off the books. Besides paying for meals at Asia’s fanciest restaurants, he was famed within the Navy for the prostitutes and strippers he had on call from China, Indonesia, Malaysia, Philippines, Russia, Thailand and Vietnam.

Organizing the sex workers into what he dubbed ‘elite SEAL teams’ Leonard would fly them from their countries to whatever port the Blue Ridge might be visiting.

Francis, 53 also known as Fat Leonard has pleaded guilty to bribery and defrauding the U.S military of $35 million. Officials however, believe that monetary losses sustained by the Navy are far greater.

Leonard is currently in jail at San Diego since his arrest in 2013 and is co-operating with authorities as he awaits sentencing. This case has snowballed into an epic embarrassment for the U.S Navy, which has no answers as to how so many officers on the Blue Ridge succumbed so easily to commercial sex workers, extravagant meals and expensive gifts dangled by Francis as temptations.

More than 60 U.S Navy admirals have come under investigation by the Justice department and the Navy for their interactions with Francis and his company.

Two admirals have been charged in Federal court and six others have been censured or disciplined by the Navy. Authorities have publicly identified only a handful of others so far.

This raises serious questions about the extent to which U.S admirals in the 7th fleet and the rest of the Navy knew of the happenings under their command but did not intervene.

There are strong possibilities of a massive cover-up to protect the senior U.S Navy leadership from these extremely serious corrupt acts and breach of professional ethics.