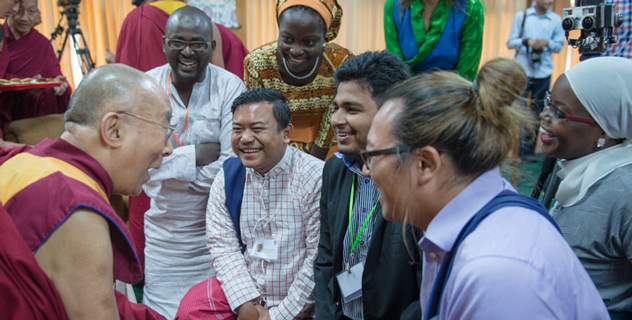 From all accounts, it was a major event – the conference of Chinese dissidents in Dharamshala, India. It brought together Uyghurs, Tibetans, Mongolians, Taiwanese and Falun Gong practitioners among 69 foreign delegates.

Yet, for the otherwise proactive Indian as well as the world media, it was a non-event. As of now, very little is known of what happened. What did the Dalai Lama say ? Or Katrina Lanton Swett, a commissioner of the US commission of international religious freedom ? Or Yang Jianli, a Tiananmen activist ?

In normal circumstances, the ubiquitous TV news channels would have been all over the place, not only covering the conference itself, but also interviewing the various participants, especially when nothing of the sort has taken place in recent years if only because of the curious reticence of the Chinese dissidents. They have generally never cared to hold conferences of this nature in India or elsewhere.

Now, it is possible to guess the reason from the silence imposed on the meeting by New Delhi. No government is willing to rile the Chinese by hosting such a gathering, let alone give publicity to any if they take place. The Middle Kingdom is too strong and getting stronger – militarily if not economically – to be treated lightly. In any event, there is no knowing how it will react, given its intrinsically unstable and unpredictable totalitarian nature.

India probably has an extra reason to be careful. Of all the countries in China’s neighbourhood, it (along with Vietnam and Russia) has been the victim of  aggression by China. But, more than Vietnam (or Russia), India is apparently in Beijing’s military sights all the time because of its widely-admired democracy and, above all, a peace-loving and intellectual civilizational background which has universal appeal.

India has every reason to believe, therefore, that China will like to keep it on tenterhooks. Among its tactics is to keep the border issue alive by refusing to accept the McMahon line (signed in Shimla in 1914) although China acknowledges its legitimacy in Myanmar.

There is also the fear that China may indulge yet again in a 1962-type incursion if it feels that India is aspiring for a level of parity with China, at least in economic matters, and plays a more assertive role in, say, the South China Sea with American and Vietnamese concurrence.

It is to keep Beijing in good humour that New Delhi cancelled the visa for the Uyghur activist Dolkun Isa and two other Chinese dissidents and allowed the conference to go ahead behind closed doors. By its mellowness, India has indicated that it has no intention of allowing its territory to become a centre of anti-Chinese activity.

As it is, the Narendra Modi government has carried out a partial u-turn on the previous government’s accommodative policies on the Dalai Lama by being egregiously discourteous to the Tibetan pontiff. The latter was summoned peremptorily to prime minister Modi’s residence late at night last year for an apparently one-sided lecture on the state of the relations between India, China and the Tibetan government-in-exile in Dharamshala. The Dalai Lama was reportedly “shaken” by the encounter.

Nothing remotely so boorish had happened between him and the Indian authorities since he fled from China and sought asylum in India in 1959. Since then, he and his followers have lived in India with honour and dignity with Dharamshala becoming the “capital” of the Tibetan government-in-exile.

As a follower of India’s greatest son, Lord Buddha, the Dalai Lama has always been admired and respected in India. He, too, evidently feels completely at home in his adopted country. It is a travesty of the age-old saying in India – athiti deva bhava (a guest is like a god) – for the BJP government, the supposed upholders of Hindu traditions, to be insulting towards the Nobel laureate, apparently out of fear of China.

The Modi government has not only been pusillanimous, it has also displayed its amateurishness by first trying to poke China in the eye by inviting Isa and other dissidents, and then hastily beating a retreat by keeping them out.

The initial move was obviously born of the irritation which India felt when China blocked its attempts to have the Pakistanijehadi, Azhar Masood, branded as a terrorist by the UN. But when Beijing frowned, New Delhi quickly retreated, showing that it hadn’t thought through the matter. India probably would have cancelled the conference as well, but it might have been too late to do so, apart from inviting further ridicule.

There are commentators in India who caution India against punching above its weight where China is concerned. They also believe that Chinese business interests in India will deter the Dragon from any military adventurism. But the perception of China by the average Indian since 1962 as overbearing and untrustworthy makes any sign of genuflexion by the government politically damaging. For this reason, most Indians would have shown greater interest in the Dharamshala conference if they knew about it.

The Modi government cannot be unaware of these feelings. But its inexperience in dealing with such cynical neighbours like China (and its all-weather friend Pakistan) is responsible for the mishandling of the Dharamshala conference.