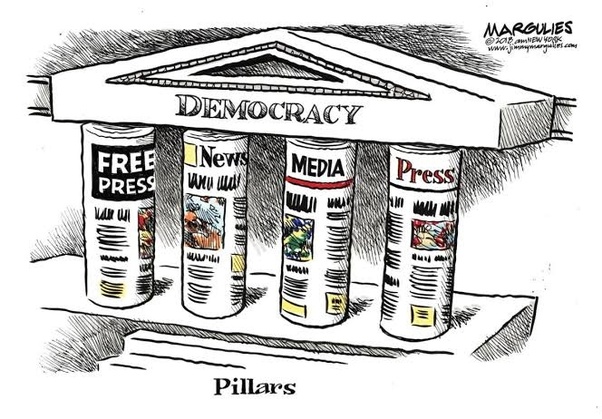 “I would rather have a completely free press with all the dangers involved in the wrong use of that freedom than a suppressed or regulated press.”

This was the opinion of the first prime minister of India, Pt. Jawaharlal Nehru. A statement made by a stalwart like him shows the essential role of media in the functioning of democracy but he too with subtlety, adduced the dangers involved with a completely free press.

In the words of Benito Mussolini-

“Democracy is a kingless regime infested by many kings who are sometimes more exclusive, tyrannical and destructive than one, if he be a tyrant”. It is the fear of being exposed by the media before the public that most of the politicians keep themselves under control to some extent”

But the recent events suggest that the media have deviated from reporting the news to making news which has been guided by the hunger of high television ratings. This has often made Media houses mold news to create a sensation. The event of Palghar in Maharashtra has been a perfect example. A renowned journalist was booked for promoting enmity and defamation. It was alleged that the media house wrongly gave a mob-lynching incident a communal angle and also made an outrageous remark on the leader of a national party.

“Liberty does corrupt into license and is prone to be abused. Every institution is liable to be abused, and every liberty, if left unbridled has the tendency to become a license which would lead to disorder and anarchy.”[1]

The contemporary conundrum has emanated from the expansion of the influence of media vis-à-vis increased omnipresence of the media with a high potent impact on the people. The role of the press as a ‘watchdog’ is a traditional characterization of the role of news media. This traditional approach of the media has been shattered. Media, instead of reporting the functioning of state machinery have also begun running the parallel investigation, trial, and conviction. An extensive proof of this assertion has been the media coverage of the mysterious death of Bollywood star Sushant Singh Rajput. The media must be acknowledged for its role as a watchdog which unveiled several laches in the investigation by the state authorities, but it must also be criticized on its leap from the traditional approach to its modern incarnated approach of conducting suo-motu investigations showcasing witnesses with impugned credibility in the name of ‘Sensational Revelations’ and arriving at conclusions through various theories. In the act, several actors, politicians, directors, and producers have fallen prey to the various allegations bringing their reputation at stake.

This modern-day practice has been termed as ‘Media Trial’. Strangely enough, the media has been successful in achieving public attention over the matter which has further exacerbated its hunger for heavy TRPs. This has created a very critical situation as a plethora of people stand under the risk of destroyed prospects even if a slight mention of them is made which may or may not to be proved further in the court.

This abysmal situation has brought down the works of media from public services quenching people’s right to know to become a party for criminal defamation.

In the times of the technological revolution, where the electronic media is ubiquitous, it has become a piece of cake for the media houses to make or break the reputation of any public figure or government, as people bestow their trust and do not question the veracity of the news. Therefore, extra caution on the part of the media is necessary.

In India, the Apex Court has laid sheer emphasis on the importance of maintaining freedom of the press as the legitimate duty of the press is to furnish the true facts and opinions in the light of public interest. This has been elucidated to such an extent that in, Indian Express Newspapers (Bombay) P Ltd v. UOI[3], the Hon’ble Court opined that, any law or administrative action which interferes with the freedom of the press, should be invalidated. It is pertinent to understand that this immunity or right bestowed upon the press is in the light of Article 19(1)(a). This clearly implies that the press has to act within the sanctioned legal restrictions of this Article, which includes, public order, security/integrity of the state, public decency, and morality of the state.

It is explicitly evident that the press plays a vital role in the domain of public order, as the information may be welcomed differently by different groups and any imbalance may certainly lead to disturbance in public tranquility and thereby hampering the public order. The press has to take extra-ordinary caution while exercising this right, even in the time of COVID, the gap between the outer world and the home is fulfilled by the media.

The freedom of the press is a privilege in the modern democratic state and misusing this right to lower the prestige of Judges and Courts[4] is never justified. This right also leaves a dynamic room for fair criticism in the administration of justice without any attributing motives[5]. The right to freedom also flows through the filter of Defamation, which is viewed from the perspective of the public and through the microscopic view of an individual and this should be exercised keeping in mind the dignity and reputation of an individual. The media must ensure, a legitimate moral element in their content, maintaining contemporary decency at the same time.

Therefore, it is the judicious duty of the press to exercise the right in a legitimate manner, uncompromising the security of the state, public order, the status of the Courts, an individual’s reputation, and morality of the state.