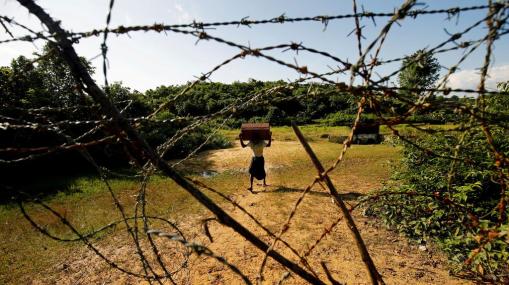 A Rohingya man carrying his belongings approaches the Bangladesh-Myanmar border in Bandarban, an area under Cox’s Bazar authority, Bangladesh on August 29, 2017 amid reports that security forces may be setting fires to Rohingya properties in Rakhine. Mohammad Ponir Hossain/Reuters

Authorities in Myanmar say close to 100 people have been killed since Friday when armed men, reportedly from the ArakanRohynga Salvation Army (ARSA), launched a pre-dawn raid on police outposts in the conflict region and this has been the main cause of the latest violence in Arakan. According to one report, “The army has declared a war against ‘terrorism,’ encircling the townships of Maungdaw, Buthidaung, and Rathedaung, home to around 800,000 people, and imposed a curfew from dusk to dawn” perhaps to deepen further its military actions upon the most persecuted and forgotten community, caged.

Rights groups have reported that close to 800 men, women, and children have been killed and the latest violence has also triggered another refugee surge across the border towards Bangladesh. The recently published photo of a drowned and floating Rohynga baby reveals the state of desperateness that has afflicted the fleeting Rohyngas.

Rohyngas accuse Myanmar government and report that in the broad day light and also during the night, in the cover of curfew “soldiers are shooting indiscriminately at unarmed men, women, and children and carrying out arson attacks.” Myanmar authorities, however, blame ARSA “extremist terrorists” for the killings and also for the fires.

However, given Myanmar’s record it is not hard to sense the truth and also the fact that Myanmar government would not allow any neutral monitors on the ground confirms the claims of carnage made by both Rohyngas as well as the rights groups. Furthermore, de facto head of Myanmar government, Nobel Peace Laureate Aung San Su Kyi’s denial of the claims and her refusal to meet any journalist that asks questions about Royngas is an indication of Myanmar government’s discomfort with the truth.
Until now Myanmar government has been pretty consistent in its treatment of Rohyngas – persistent persecution, insistent denial and systematic refusal to permit neutral probe. It looks like Myanmar’s ultimate aim is to kill and frighten the Rohyngas so that they depopulate themselves from the region on their own accord. With international inaction and apathy, this looks more and more like a looming possibility. UN agrees it believes that Myanmar Army’s response amounts to “ethnic cleansing.”
In all these, the sudden appearance of ARSA (Arakan Rohynga Salvation Army) in the scene is worrying if not intriguing.

We don’t know much about ASRA. Is this something that has emerged out of desperation from within or is this something that has been engineered by the authority? ASRA’s spokesman, however, claims that it is a force from within created to “to defend, salvage and protect Rohingya community in Arakan with our best capacities as we have the legitimate right under international law to defend ourselves in line with the principle of self-defense.”Available information suggests that like the Tamil Tigers its sponsors are expatriate Rohyngas.

While I fully support ASRA’s motivation and their resolve to fight for the cause of Rohynga salvation, they have to be careful how they pursue their goals. Understandably, they have only limited resources and with the non-existent international support they can at the most kill and injure few Myanmar soldiers, but by no means, their actions would make Myanmar authority neither capitulate or compromise. On the other hand, as is conceivable, Myanmar government’s response to their misadventures would be harsh and would intensify miseries of the very people that they are trying to ‘defend.’ Furthermore and this is something that ASRA needs to consider carefully, that their actions may now provide perfect raison d’etre to Myanmar government to justify, indeed morally, its violence. As Rohyngas are Muslims, in the current international political climate of Islamophobia, it would be only too easy to paint ARSA and by extension, the wider Rohyngas as ‘Islamic Terrorists’and thus turn victims into villains and real villains into virtuous. Rohyngas will be like the Palestinians, demonized and persecuted with impunity and with twisted morality!

In the recent melee, the real loser – morally that is – seems to be Bangladesh. Unlike Thailand which has opened its border to Rohingya refugees, Bangladesh has proposed joint military operations with Myanmar Army against the Rohingya fighters. Sadly, instead of finding a permanent solution for the RohyngasBangladesh is opting to do the most despicable – join the persecutors to in killing mission.
Myanmar has tried violence as a remedy of Rohingya issue for the last several decades with no effect, and more violence is unlikely to give them anything better. However, Myanmar’s addiction to violent persecution drives one home truth, the solution will not come from them. It has to come from outside. The International community has to play a much stronger role, otherwise, as someone has argued recently, “like other stateless and unrepresented Muslims, [the Rohingyas] are at risk of producing a persistent terrorist threat” that at the end would destabilize not only Myanmar but also its neighbors.
Thus given Myanmar government’s consistent refusal to do something more conciliatory and dignified about the issue and also given that it even denies any wrong-doing suggests that conventional diplomacy would not work. Something “out-of-the-ordinary” is needed and again, given trust deficits on both sides it may be helpful if not more permanent to explore possibilities of setting up an autonomous unit for Rohyngasin areas where most of them live and administer it under the joint governance of a UN peace-keeping force (or a multinational regional force – Malaysia has indicated its intention to join a regional solution) and civilian administration made up of Rohingyas and Myanmar authorities – one-country-two-system solution.