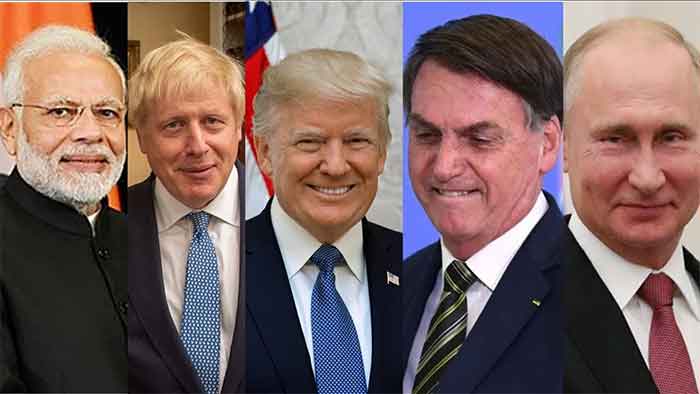 The world is silently witnessing the erosion of democratic, progressive, secular and liberal cultures of governance. The contemporary governments are becoming more authoritarian and threaten the multicultural mosaic of societies around the world. The governing and non-governing elites falsely argue that democracy breeds inefficiency and creates functional barrier to the animal spirit of profit making and entrepreneurial activities. The majority of people are conspicuously silent. The pandemic has taken away the limited space for resistance to the on-going authoritarian ordeals. From Washington and Westminster to Beijing, Brussels, and New Delhi, the authoritarian cultures define the operational character of the governments. These Machiavellian authoritarian regimes are not only against freedom and democracy but also spread bigotry. The silent coup of reactionary forces is accelerated by rewriting of history, imposition of neoliberal economic policies, removal of all institutional and legal barriers to the lynch mob of market forces.  The governments are not bystanders but active facilitators of authoritarian regimes as a dominant reality in society, politics and economy.

There is a commonality of authoritarian regimes across the globe. These regimes follow a common conservative cult called ‘nation first’.  This ‘nation first’ reactionary political and economic dogma derives its philosophical lineages from social and religious conservative thoughts, that in essence argues to protect, promote and glorify moral traditions of the past. The conservatives and authoritarian ideologues argue that the values of the past can provide solutions to the present predicaments of the society. The knowledge of the past is more valuable for the present. The past glories and successes are the life and blood of contemporary authoritarian states and governments. The conservative ideals are opposed to change and prefer to maintain status quo. Edmund Burke as a philosopher is the patron saint of conservative philosophy for last three centuries. His philosophy continues to provide political justification to authoritarian and conservative regimes of today. Burke was opposed to the idea of any form of revolutionary change in the society as it destroys the traditional fabrics of good society.  Such an ideological framework is a deliberate strategy to avoid accountability and supress citizenship rights and liberties. There is relentless attack on democratic and multicultural cultural ethos in politics; often led by governments with conformist outlooks devoid of conscience and compassion.

The contemporary conservative politics is a reaction against the aggrandisement of neoliberal capitalism, which consolidated wealth in the hands of few and marginalised the masses. The capitalist classes have formed an alliance with the conservative forces to further consolidate their power and wealth.  The government formed out of such an alliance does not represent the interests of the marginalised masses. As a result, the world is confronting miseries amidst plenty. The forward march of reactionary and authoritarian governments across the globe is based on the politics of maintaining social, cultural and religious order of the past in the name of national, ethnic and religious glory based on conquest and dominance of minorities and working-class population. Such irrational, illogical and authoritarian outlooks define conservative philosophical praxis.

The conservative governments use the state power to implement their authoritarian agenda of governance devoid of conscience and compassion. These forces are not only hostile to critical public opinion but also supress any form of dissent within a democratic culture. Democracy dies its natural death without the voices of dissent and debates. The idea of mass obedience to authority is central to authoritarian governance model practiced by conservative governments across the world. The authoritarian regimes and their ideology of mass obedience kills the innate conscience and compassion within human beings. The idea of dominance, hierarchy and subjugation becomes the organising principles of authoritarian states and governments under which majority of people suffer. As a result, the banality of authoritarian evil becomes normal and natural in the society, which produces totalitarian leaders without conscience and compassion. Such leaders use every opportunity to lead and dominate the masses by using state power. The governments become hostage to such leaders and their ideological cult. The compassion and conscience tend to restrict individuals in the misuse of power but the authoritarian cult leaders do not have any such restrictions in use and abuse of power. The authoritarian leaders are revengeful, manipulative, unsympathetic and untrustworthy. These social and psychological characters are products of conservative and capitalist societies. From Americas, Africas to Europe and Asia, the world is witnessing such characteristics in leaders ruling these continents.

The pandemic fuelled economic crisis is ravaging the world but the governments are mute spectators in USA, UK, India, Brazil, Iran, Mexico and many other countries. The leaders and the governments in these countries show little compassion and conscience in discharging their democratic responsibilities for their citizens. The global health crisis has revealed that these authoritarian regimes promote the propaganda of ‘nation first’ but in reality, these leaders betray the very people elect them to power. These governments and leadership stand with the capitalist class to further consolidate their wealth even during the global health and economic crises. The political and economic profiles of authoritarian governments show that these right-wing regimes are really without any form of human or animal conscience. The right-wing regimes and their leaders are motivated by fear and use it to rule the massed by spreading prejudice.  The aggressiveness in authoritarian leaders is a product of fear; the source of the desire to dominate with medieval mindset. These leaders use fake news and misleading information to manipulate and control the masses.

Why do people vote leaders and regimes without reason and conscience? Why do people support dictatorships? Why do people support their own subjugation? The Stockholm syndrome, political ignorance, illiteracy, poverty and love for strong leaders etc are some of the silly reasons based on superficial analysis. The alternative to such a right wing, reactionary and authoritarian shift in society, politics and economy needs dispassionate analysis on the causes of such a transformation. It is impossible to fight authoritarian regimes without understanding the foundations of their support and reasons behind the causes of its growth. The capitalist delusions and growth of anti-politics culture of entitlement led to the rise of authoritarian regimes with the help of reactionary religious and market forces.  In spite of flagrant erosion of democratic space and deepening of crises, the popularity of authoritarian regimes and their leaders did not decline. It is a serious cause of concern while reimagining alternatives. Foxy electoral strategies are not enough for radical social and political transformations to defeat authoritarian psychopaths. The survival of democratic, liberal, progressive and multicultural values depends on radical alternatives produced in impending people’s struggles. People’s struggles are incubators of ideas and inventories of alternatives. There is no other sustainable alternative to struggles based on compassion and conscience.