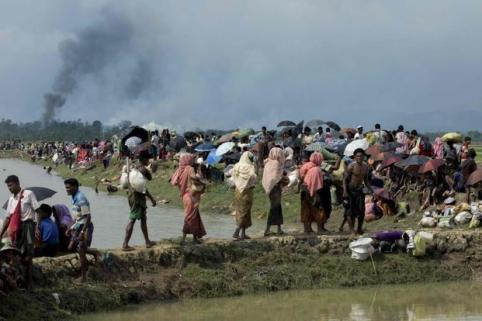 Justifiably, Bangladesh is highly concerned about this influx of refugees, since Bangladesh itself has the dense population and is an economically weak developing country. Bangladesh is well justified in expecting that the United Nations and other countries should interfere in the matter and ensure that the crisis in Myanmar would be sorted out immediately. So far, Bangladesh has handled the refugee influx situation with compassion and understanding, but it has to make a choice between compassion and national security now necessarily.

The illegal immigrants and refugee issues have been creating problems for several countries. United Nations Organization which has a separate section dealing with the refugee problems could not do anything worthwhile to find a lasting solution to this global issue.

A few months back when refugees started entering Europe in a big way from Middle East countries and Africa, Europe was caught unaware with no strategy to face this grim issue. German Chancellor accepted the entry of refugees into Germany, saying that it would be a matter of compassion and human rights issue. With such tacit encouragement from German chancellor, more refugees started flowing in from different countries such as distant Afghanistan, After entering into Germany, several of the refugees have now placed themselves in other European countries also. The entry of these refugees into Europe whose background and even nationality are not known in many cases and whose education and skill level are inferior compared to the European standards, Europe now has a huge problem on its shoulders, threatening to destabilize Europe and change the face of European life to some extent in the coming years apart from posing security threat. Social tension is already evident due to the settlement of refugees in some pockets in Europe.

In Sri Lanka, at the time of the ethnic war between Sri Lankan government and the separatists, hundreds of Sri Lankans of Tamil origin left the country and reached India. They continue to stay in India for several years now, maintaining their refugee status and many of the Sri Lankan refugees in India born in the last few years have not seen Sri Lanka at all.

Of course, one cannot forget that thousands of Tibetan refugees left Tibet and entered India in the wake of the forced occupation of Tibet by China and now the Tibetan refugees have spread themselves around the world and are trying to integrate themselves into the mainstream of the countries to which they have migrated legally or illegally.

Perhaps, Canada is the only country in the world today which is extending an almost open invitation to the migrants and refugees from across the world, calling it as its commitment to humanitarian and compassionate principles. As of now, Canada can adopt such policy as it is an under populated country with the vast land area and massive natural resources. However, even within Canada, there is emerging difference of opinion as to whether such receptive policies towards migrants and refugees should be continued to be adopted in Canada, as there are already indications that some of the migrants and refugees who have entered in recent times may have a questionable background.

Whither Myanmar refugees in Bangladesh:

The human rights activists around the world, who are mostly arm chair critics and commentators from the gallery, argue that the influx of refugees and migrants from one country to the other due to oppression and unsecured conditions should be viewed as a humanitarian problem and it will be cruel to drive them back with least consideration for their pitiable conditions.

U N General Assembly which will convene on September, 12 may adopt a motion condemning Myanmar’s actions for creating a situation that caused the exodus of Rohingya refugees. But, this will not help the cause of Bangladesh in tackling the present refugee issue, as most resolutions and recommendations of United Nations are not viewed seriously anymore by any country in the world.

The refugees from Myanmar pose a dilemma for the world conscience to judge as to whether Bangladesh should accept the refugees at the cost of its security. With no refugee problem having been solved conclusively in any part of the world, Myanmar refugees will remain as a talking point for some time for the global media, until the next refugee crisis would happen in any other part of the world.