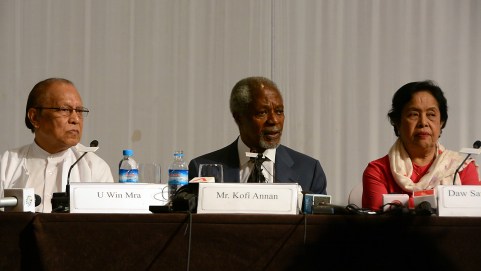 Dear Mr. Annan, I am very disappointed with your statement, dated August 25, 2017, concerning the latest violence in the Rakhine state of Myanmar. You stated, “I am saddened to hear of the loss of life of members of the security forces. The alleged scale and gravity of these attacks mark a worrying escalation of violence. No cause can justify such brutality and senseless killing. Perpetrators should be held to account.”

From the first sentence of that paragraph, it is not difficult to understand where your sympathy lies. It is, sadly, with the Myanmar government that sponsored your Commission and its criminal perpetrators – the Myanmar security forces and surely not with the Rohingya victims who should have deserved such. You equivocated when it was necessary to take the moral high ground and to call a spade a spade. I am apprehensive that such mixed messaging will only justify the ongoing genocidal crimes against the Rohingyas, much like what happened in Rwanda that you continue to regret happening under your watch as the UN Chief.

Has not history taught us all that violence is the last resort of an oppressed community when all pleas and other non-violent means for stopping violence directed against it have been ignored or shut down by the oppressor? And even then, the so-called violence of the oppressed against the much better armed, equipped and financed oppressor is motivated by the single factor: defending or protecting its community. It would be a gross misjudgment to equate their struggle for self-defense with the extermination campaign of the more powerful oppressor.

I am sorry to observe that you have been misinformed.

It is an irony that the victims of the genocide – the Rohingyas – are now framed as the ones on the wrong side because of their alleged attacks on Myanmar security forces this past week or back in October of last year. Forgotten in that calculus are decades of genocidal crimes of the successive military regimes since the days of General Ne Win that were to continue full-blown to this very date under Suu Kyi’s government. Overlooked in that context is the mere fact that being denied citizenship simply because of its racial and religious identity more than half the Rohingya population has been forced out of its ancestral land in Arakan (Rakhine state). Ignored also are the facts that Myanmar epitomizes apartheid policy in our time and flouts the Universal Declaration of Human Rights (UDHR) by denying such rights to the Rohingya people. When it comes to the Rohingya – rightly recognized by the United Nations (that you once led) as the ‘most persecuted people’ on our planet – not even one of the thirty rights (Articles) enshrined in the UDHR is honored by the Apartheid Myanmar.

I would like to believe that as the Chairperson of the Advisory Commission on Rakhine State, you know that the Burmese military (a.k.a. Tatmadaw – long known as the Rapist Burmese Army) has been building its troops in Rohingya areas of northern Arakan since August 10, effectively blockading those areas and terrorizing the already marginalized community. Under the name of interrogation, hundreds of Rohingya men and boys were taken away by the military from the IDP camps. They were tortured, and many were killed while Rohingya women left behind were raped as a weapon of war to cleanse them ethnically. Their homes were torched, too. The UN and Human Rights Watch, amongst many human rights groups, all were asking the Myanmar military to back off but to no avail.

The latest episodes of atrocities perpetrated by the military resulted in a fresh influx of thousands of Rohingyas into Bangladesh. That is despite stepped-up patrols by Bangladeshi border and coast guards, who last week had pushed back a boat carrying 31 Rohingya, including children. The Balukhali camp (in Cox’s Bazar of Bangladesh) alone saw new arrivals of some 3,000 Rohingya refugees in the last few days. And all these happened days before the alleged attack by the Rohingya ‘insurgents’ against Rakhine police.

As I write this letter, per credible reports, on August 25, in the early AM hours 25 Rohingya villages were bombed by Burmese military reportedly using six gunship helicopters, navy ships, and tanks as Rohingyas were sleeping in the middle of the night. It is feared that hundreds of Rohingyas have been slaughtered and more than a thousand homes set on fire on Friday making tens of thousands of Rohingyas homeless because of the latest military action.

When has life on earth become unbearable and worse than death for the oppressed Rohingya is it difficult to fathom why some would ‘radicalize’ and choose to fight back – and justifiably so – with whatever means available? Now the criminal Burmese military claims that 59 “insurgents” and 12 soldiers were killed after Thursday midnight. They say that “insurgents” were armed with machetes. As you know too well, farmers use machetes, “insurgents” don’t.

No one would disagree with you that violence is not the solution and that exercising restraint is important to avoid further escalation. However, the ball is in the military’s court, and it is they who need to be restrained from harming the Rohingya people. Truly, if our world leaders had the moral fortitude, these war criminals would have been tried a long time ago in the International Criminal Court for their decades of crimes against humanity – which by no means were limited to the Rohingyas alone but also to other ethnic minorities that have been fighting for their survival. It would be sensible to reflect that for the last 40 plus years Rohingyas have been peacefully asking for the restoration of their citizenship and other rights whereas the other ethnic groups, non-Bamar Buddhists, and Christian, in Myanmar are fighting the government with guns.

Suu Kyi and her brutal military have been too cunning for too long to deflect international pressure. Bluntly put, the Advisory Commission on Rakhine State that you chaired was one such window-dressing attempt by the Myanmar government to ease pressures from the international community and humanize the hideous face of Myanmarism that has contributed to so much human suffering: the destruction of tens of thousands of homes, businesses, schools and mosques, the encampment of some 140,000 Rohingyas in the concentration-like IDP camps, widespread rape of women, let alone the forced exodus of nearly 87,000 to neighboring Bangladesh, since 2012 alone. [According to the UN, 52% of the women they surveyed in refugee camps in Bangladesh were raped by the Tatmadaw. Seventy percent of these 87,000 refugees are women and children since men are either killed or imprisoned.]

Suu Kyi’s government won’t even allow any international investigation team to visit the troubled Rakhine state and inquire about serious charges of war crimes perpetrated by the government security forces – all committed in cahoots with ever growing fascist elements within the broader Buddhist society that see no place for religious minorities to live inside Myanmar.

Mr. Annan, you have admitted in your report the Advisory Commission on Rakhine State that she formed “is a national entity and the majority of its members are from Myanmar.” Its mandate did not allow the use the term ‘Rohingya’ by the wishes of Ms. Suu Kyi. In spite of such obstacles you faced, I am glad that the report you submitted is a milestone for the Rohingya by calling for lifting restrictions on movement and citizenship for its persecuted Rohingya minority if Myanmar wants to avoid fueling “extremism” and bring peace to the Rakhine state.
Suu Kyi, sadly, has never been sincere to resolving the Rohingya problem. She has denied their very existence and has been widely condemned by all quarters, including fellow Nobel Laureates.

Did you ever ponder about why the so-called insurgency of the Rohingya who had hitherto, by all accounts, been the most non-violent minority happened just shortly after your appointment as the chair to the commission and also within hours of submission of your final report this week? Who benefits from such violence, and who loses?

It is the Rohingya that loses the game played on such an uneven playing field. It is the Myanmar government and its Tatmadaw that win. They never wanted a peaceful solution to the decades-long problem, which they had initiated. And they don’t want to implement the recommendations you have put forth in your commission report either. So, they planned, moved to the Rohingya areas, cordoned off and committed war crimes to trigger off the latest episode blaming once again their victims to justify their ongoing atrocities under the pretext of being attacked by the insurgents. The violence that they unleashed this week and before is all part of a very sinister long-term strategy to ethnically cleanse minority Rohingyas. It was no accident and did not happen in a vacuum!

Your commission report rightly noted that if human rights were not respected and “the population remains politically and economically marginalized – northern Rakhine State may provide fertile ground for radicalization, as local communities may become increasingly vulnerable to recruitment by extremists.” “While Myanmar has every right to defend its territory, a highly militarised response is unlikely to bring peace to the area,” the report also said.

The perpetrators of violence are the Myanmar security forces who should be held to account. They have failed to heed to your recommendations, and won’t be sobered by mixed messaging coming from world dignitaries like you. It is high time to try these brutes and savages in the International Criminal Court to save humanity, failing which I am afraid, Mr. Annan; we may see the end of Rohingya community in the den of intolerance called Myanmar. She remains the last vestige of an apartheid state in our time.

On March 26, 2004, you stated concerning Rwanda genocide, “If the United Nations, government officials, the international media and other observers had paid more attention to the gathering signs of disaster, and taken timely action, it might have been averted. Warnings were missed.”
Sir, there is no excuse this time. There is no ‘guilt of the sin of omission’ within us. Ms. Yanghee Lee, the United Nations special rapporteur, has warned us; the international media, Human Rights Watch, Fortify Rights, Amnesty International and other observers have all warned us repeatedly about the Rohingya catastrophe. It needs a leader like you to stop their extinction. In this regard, remember that genocide is a process and not an outcome. Stop it when it is not late.

Please, be forceful in condemning Myanmarism and its viciousness that have caused so much human suffering in our time. If it is not you, who will? The lessons from Rwanda should make you better prepared to stop this slow-burning genocide that the minority Rohingyas are facing today. Help them to survive and live as equal citizens in Myanmar. Please, take the lead in this noble cause.

Thanking you for reading my letter.