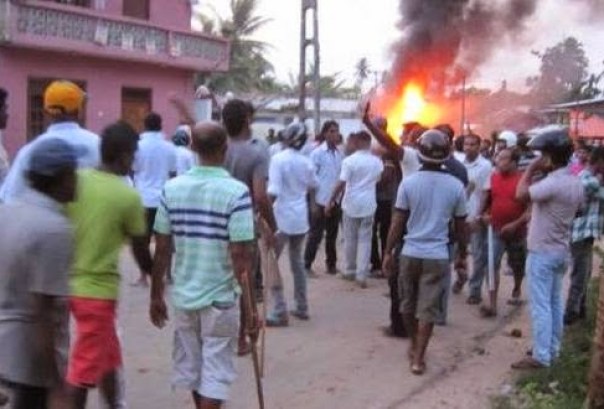 “One’s life has value so long as one attributes value to the life of others, by means of love, friendship, indignation, and compassion.” Simone de Beauvoir

Only when fear and hatred is spread by extremists does serious reflection haunt a community. The teardrop-shaped island of Sri Lanka, a seeming paradise hanging off the Indian subcontinent, has been provoked yet again. Within a few hours arose an ugly incident of violence, the hill country’s vibrant colors serving as a backdrop to death and destruction – a systematic break-down of lives, religious spaces, and personal property.

The July 1983 riots, insurrections quashed in 1971 and 1989, and 2014 Aluthgama riots were among these unexpected bursts of violence. In all cases, the unprepared state reacted slowly before resorting to brutal force to restore order. How could Sri Lanka become driven by hostility and terror in a short time? Recent events suggest that this question deserves further attention and study to better inform the work of policymakers.

A nation plunged into a state of emergency with a heavily state-influenced media is the present situation in Sri Lanka. Terrorism exercised blatantly in the streets by violent, extremist nationalists to harm other religious or ethnic groups should not be met with silence, especially in a town that treasures Buddha’s sacred Temple of the Tooth, symbolizing the purity of the words of non-violence uttered by Buddha. Extremists should be punished to restore the rule of law in society, regardless of the religious or political affiliations of the perpetrators.

Violence was sparked by the death of a Sinhalese Buddhist man on 4 March, who was allegedly attacked by three Muslim men due to a traffic accident in Teldeniya. Following this, a state of emergency was declared by the government. The last time a state of emergency was in place was during the country’s 26-year civil war with the Tamil Tigers. During the quarter-century-long war, one of the most significant incidents that triggered communal violence among the Sinhala Buddhist majority and the Tamil minority was the 1983 riots. Yet neither the majority of Sinhalese Buddhists nor Tamils were part of the riots. It was terrorist, extremist nationalists – mainly Sinhalese Buddhists – who set off anti-Tamil pogroms in the south. The government at that time was silent and prominent members of the majority religious community, including the preachers of Buddha’s words of ‘Ahimsa’ (‘do no harm’), were also silent, as in the present.

The recent racially and communally-minded riots by certain sections of the majority Sinhalese Buddhist community targeting the Muslim minority was a warning of the deteriorating threads holding together Sri Lankan society. Yet it was several days later that the government tightened its control over the ugly situation by blocking social media platforms through which ‘fake news’ was disseminated to create more tension. Stories of exploding Muslim population growth and surreptitious administering of sterilization pills to Sinhalese were attempts to escalate the situation by pandering to extremist elements promoting hatred and fear.

The vulnerability to social distress and division caused by ‘fake news’ in Sri Lanka is high in the persisting shadow of ethnic tensions. The central aim of a nation on a path to reconciliation should be to ensure zero tolerance for hate speech and violent nationalism.

On a recent visit among fellow South Asian and East Asian researchers at a programme on “Digitization in Asia and Germany” with a special focus of tackling fake news, this author was present at the Berlin Ministry of Information and Foreign Affairs on the day the Ministry’s website was hacked. Not limited to smaller nations like Sri Lanka but cybercrime prevails. Tackling fake news is a costly and serious challenge. Sri Lanka could learn from Germany that has taken rigorous steps to tackle fake news deemed dangerous to public peace and discourse. The 2018 Network Enforcement Act (NEA) aimed at major social networks without much radical alteration to existing German law is only a restatement of German panel code. Due to this social media companies are now setting up legal compliance offices specifically for the NEA. Facebook in Germany has hired over one thousand content moderators to comply with NEA.

President Maithripala Sirisena’s government has taken measures to curb the tension. However, it should not allow violent nationalists to routinely and easily spread their message, as this runs counter to the government’s wishes to achieve sincere reconciliation in the country. A Sedition Act to prevent hate speech and swift action could ease the situation and assist the process of seeking ethnic harmony.

The perpetrators of these vicious attacks should be punished. If unpunished, extremists working towards different agendas will take advantage of the opportunity to dominate the narrative and shape the national agenda. ‘Fake news’ and misinformation could construct a powerful narrative that would gain traction and detrimentally influence society. This would be a dangerous path, perpetuating and exacerbating instability across the nation. Examples of this phenomenon have played out globally in recent years, from the US and Europe to the far corners of Asia. Yet Sri Lanka cannot become another Myanmar and it is the role of majority Buddhists and clergy to ensure this is not the case, to defeat the ideologies of extremism.

To make sense of, and exist safely in the midst of rising extremism and violent nationalism, it is vital to promote the true essence of various religions. An attempt to address fear and hatred spread by extremism can be made by placing emphasis on the ethics of non-violence.

This task will require a sturdy and responsible government safeguarding justice and the rule of law. But as the past reflects, it could also choose to do little while leaving the innocent to burn.

*(The author is a visiting Professor for Geopolitics and Global Leadership at the Northern Kentucky University(USA) and the Director General of the Institute of National Security Studies Sri Lanka, this article was initially published by the IPCS, New Delhi for Dateline Colombo, the views expressed are the author’s own)