Progress through pragmatism in the Indo-Bangla relationship 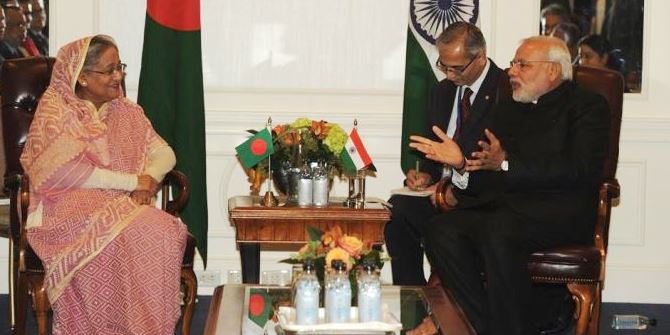 The relationship between India and Bangladesh has long been characterised by contradiction and cooperation. Relations have tended to fluctuate depending on the attitude of the governments in the respective countries. For example, when Bangladesh Nationalist Party (BNP) was in power in 2001-2006 the Indian side alleged that Bangladesh was harboring anti-Indian elements seen to pose a threat to Indian national security. This resulted in a deterioration of relations that was equally counterproductive to Bangladesh’s security.

The unique geographical location of both India and Bangladesh suggests that a pragmatic approach to diplomatic and political co-operation between these two countries is vital for the boost of regional trade and security. On top of this, Bangladesh antagonisms towards India and vice versa are petty and have the potential to threaten South Asian stability. Bangladesh’s geographical position currently enables it to benefit from trade and partnerships with both Asia and the West but Indo-Bangla cooperation will be central to continuing to reap economic and other benefits in the future.

The current Prime Minister of Bangladesh, Sheikh Hasina has sought to adopt a more conciliatory tone than many of her predecessors and relations between the neighboring countries have been improving since her state visit to New Delhi in 2010. For example, Indian exports have more than doubled over the past five years, from $2.7 billion in 2008-09 to $6.1 billion in 2013-14. Bangladeshi exports to India has grown from USD $274.26 to USD $456.633 in 2013-14 (a 166.5% rise).

Co-operation between both countries now also expanded into a trade corridor. The Indian Trade corridor will allow Bangladesh to use Indian roads, waterways and railways to trade with Nepal and Bhutan.  India gains the same right to use Bangladeshi roads, waterways and railways, which will facilitate its trade with Myanmar. Such status of connectivity and cooperation is significant and encouraging for the ongoing dialogue regarding establishment of the more ambitious Bangladesh–China–India–Myanmar (BCIM) Economic Corridor.

There have also been significant developments in energy sharing. In 2010 Bangladesh and India struck a 35 year electricity sharing deal. Under this deal, the government of Bangladesh is importing 500MW electricity from India and there is a provision in the agreement that will allow Bangladesh to export powerto India in future. Governments in both countries are now considering facilitating cross-border private sector partnership in the power sector. Public-private partnership in energy sharing is set to contribute positively in economic growth of both countries.

As Bangladesh separates India’s north-eastern states from the rest of the country, Sheikh Hasina has extended her support to India to reduce its cost of trade between south and north-east. For example, exporting internet bandwidth from Bangladesh, and provide limited transit and transhipment to Indian vehicles carrying trade goods using Bangladesh’s land and water. These goodwill gestures have come under fire her opposition at home for offering concessions without negotiating specific returns.

One of the biggest breakthroughs has been the passing of the latest 1974 Land Boundary Agreement (LBA) in the Indian parliament last month. Even though it is regrettable that it took 41 years for India to pass this bill it is a good sign that Indo-Bangla relationship is on the way to overcoming the trust deficit. According to a Bangladeshi commentator, Delhi has to take responsibility for the delay on the LBA to date since the progress has been obstructed on the Indian side by “court cases against the LBA, opposition from state governments and of course power politics in Delhi.” The agreement is highly significant as about 50,000 people who were previously stateless and in enclaves are now set to get citizenship and access to the associated benefits. This marks a remarkable and life changing moment for thousands of people who have been living in limbo for decades.

Notwithstanding this progress, many challenges remain. The potential of bilateral trade is enormous: the Confederation of Indian Industries (CII) estimates the “bilateral trade between India and Bangladesh could almost double to USD 10 billion by 2018” but adds the caveat “provided trading irritants like non-tariff barriers and infrastructure related-issues are resolved”. However, if India continues to insist on non-tariff barriers it is unlikely this potential will be realised. India needs to simplify existing bureaucratic complexities and a lack of coordination within various ministries which at times lead to conflicting rules around importing goods from Bangladesh. Trade would also be facilitated by eased visa restrictions for Bangladeshi traders.

Previously, India had accused Bangladesh of exporting and supporting terrorism to India. Sheikh Hasina’s government has taken a constructive approach to addressing India’s security concerns. Since 2010 the two countries have agreed on key security protocols, which enabled an exchange of prisoners and have helped to foster a more coordinated approach to combating terrorism and drug trafficking.  Still Sheikh Hasina faces criticism at home as in the eyes of the opposition she turns out to be too India friendly without securing enough for Bangladesh.

The sense that Bangladesh is not getting enough concessions is largely due to India’s nationalist stance on issues such as border protection and water sharing from joint rivers. In the mid-80s India built an eight-feet tall barbed wire fence covering roughly about 70% of India’s 2,544-mile border with Bangladesh to prevent illegal migration, smuggling and drug trafficking. The remaining 620 miles of the border shares joint rivers and is patrolled by border guards of India and Bangladesh. Furthermore, the Indian Border Security Force (BSF) currently has a shoot-to-kill policy currently in place, which has been a major source of anti-Indian sentiment in Bangladesh. Due to the chronic poverty in the border area many people still cross the border illegally and the combination has led to 900 Bangladeshi deaths and many more injured and tortured, according to a 2010 report by Human Rights Watch. Despite repeated protests from Bangladesh, no significant action has been taken and in the first three months of 2015, 18 Bangladeshis were killed by the BSF. A more diplomatic approach to this problem on the Indian side would lend more popular support to Hasina’s policy of pragmatism.

Similarly, competition around water from the 57 rivers that the two countries share remains a sticking point. The Bangladeshis blame India for placing dams and barrages on joint rivers and accused India for manipulating water flows during crop cultivating season. The arguments for India to compromise on this issue are not just diplomatic but environmental, as there are serious concerns around deforestation and erosion in the upper Ganges. Unfortunately, as with the LBA, progress on this issues has been hindered by internal political conflict in India which, for example, prevented former Indian Prime Minister Manmohan Singh reach to an agreement with Bangladesh around water sharing of Teesta river in 2011. However, West Bengal Chief Minister Mamata Banerjee has indicated she is willing to compromise and Modi isexpected to announce an agreement on this issue when he visits Dhaka this weekend.

[This article is published in collaboration with the writers. The post also appeared in South Asian Center, London School of Economics and Political Science – LSE]