Prime Minister of Pakistan ousted by the court on ‘dishonesty’ 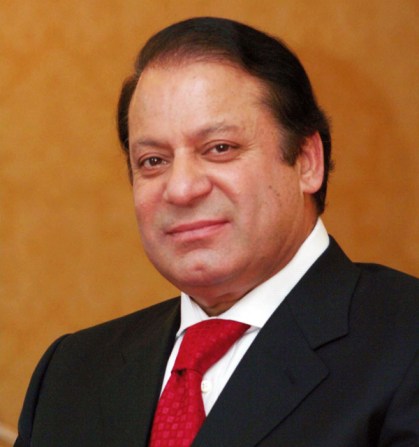 Mian Muhammad Nawaz Sharif resigned from prime ministership after the Supreme Court of Pakistan’s ruling last week which declared him dishonest. Many suggest that the establishment played its invisible role in the whole episode because the civil-military relations were not smooth. After Mr. Sharif’s disqualification, the most important question is, whether he and his party, Pakistan Muslim League-N, will remain a dominant political force in Pakistan or not?

Prime Minister Mian Nawaz Sharif resigned on Friday (29 July) after the Supreme Court of Pakistan’s announced a verdict on Panama Papers case. The five-member bench of the highest court of the country, headed by Justice Saeed Khan Khosa, disqualified him from his post and as Member of the National Assembly (the lower house of the parliament) by declaring him dishonest under the Article 62 (1) (f) of the Constitution of the Islamic Republic of Pakistan. The article was amended by the late dictator General Muhammad Zia-ul-Haq, who ruled the country from 1977 to 1988, under his Islamisation process. He added many other controversial articles in the Constitution and introduced many contentious laws, included the blasphemy laws, which are mainly used/misused against the religious minorities of Pakistan.

The Article 62 (1) (f) of the Constitution says, “A person shall not be qualified to be elected or chosen as a member of the Parliament unless, he is sagacious, non-profligate, honest and ameen (trustworthy), there being no declaration to the contrary by a court of law”.

Mr. Sharif, a conservative leader, started his prominent political career during the Martial Law period, when the first-time General Haq appointed him the Finance Minister of the Punjab province in 1981. He later became the Chief Minister of Punjab in 1985, and then he moved to the prime ministership.

When the Pakistan People Party (PPP), which ruled the country from 2008 to 2013, wanted to change the Article 62 under the eighteenth amendment of the constitution in 2010, Nawaz Sharif and Maulana Fazal-ur-Rehman, the President of the Jamiat Ulema-e-Islam, strongly opposed the move because of their conservative ideology. Now, the same article has been used to topple his government.

The court case started against Mr. Sharif with the leak of Panama Papers in 2015 that disclosed that Mr. Sharif’s three children, Maryam Nawaz Sharif, Hassan Nawaz and Hussain Nawaz, owned offshore companies, which were suspected for money laundering. Some opposition leaders, including Imran Khan, 64, filed a petition against Mr. Sharif, 67, in the apex court. The Supreme Court, formed a Joint Investigative Team (JIT) to investigate the case and collect evidence. Many observers were surprised when the court included two officers from the intelligence agencies into the JIT, and also included a member to the team who had ties with a political party, the Pakistan Tehreek-e-Insaf (PTI). Mr. Khan is the chairman of PTI and was the main petitioner against Mr. Sharif.

Although Mr. Sharif’s name was not in the Panama Papers and even the JIT report did not bring any substantive charges against him for abusing his public office, the court disqualified him for not declared his un-withdrawn salary from a company in 2013. “That was the only ground taken by the Supreme Court for disqualifying an elected prime minister,” Barrister Salahuddin Ahmed wrote in Dawn.

Based on the JIT’s report, the court also ordered the National Accountability Bureau, the country’s anti-corruption agency, whose performance was criticised by the court in the past, to file corruption cases against the former prime minister and his three children.

Sharif, a veteran politician, served as the prime minister three times in the last three decades, but he never completed his term in the office. In 1993 and 1999, he was ousted by the military, but this time the court forced him to leave the position.

In the 70-year history of Pakistan not even a single elected prime minister has completed his/her tenure. Liaquat Ali Khan and Zulfiqar Ali Bhutto were murdered, and others ousted by military or judiciary. Nawaz Sharif is the second prime minister who left the office under a court’s judgment. Mr. Yousaf Raza Gilani of the PPP was the first prime minister in the history of the country who was forced to resign in 2012 on the orders of the Supreme Court, led by the chief justice of that time Iftikhar Chaudhry. There were no corruption charges against Mr. Gilani, but he was disqualified after ‘contempt’ for not complying with the court orders to reopen corruption inquiry against President Asif Ali Zardari, widower of Benazir Bhutto. The Pakistan People’s Party considered the court’s decision controversial. Many others saw Mr. Gilani’s departure in the context of civil-military relations. Historically, the PPP and the military have difficult relationship. However, the tension between the elected civilian government of Mr. Gilani from PPP and the military leadership intensified after Osama bin Laden’s death in Abbottabad, where Pakistan’s Military Academy is situated, by the US Navy Seals under a secret operation inside Pakistan. Gilani asked the army to investigate how Bin Laden managed to hide in Pakistan for so long, in a city where many retired military officers live? He also asked the military leadership to answer the questions regarding the US operation, and information about Bin Laden before the parliament. As a consequence, he could not complete his term, so the PPP brought another prime minister Raja Ashraf who served only for less than a year.

Many political parties and legal experts are praising the court for the judgment, but there are many other legal experts who are showing their doubts on the verdict. Mr. Abid Hassan Minto, a senior lawyer from Lahore, capital of the Punjab province, views the verdict as the weakest judgment.

Pakistan’s superior judiciary has gained more power after the lawyers’ movement of 2007, which ended in 2009 after the restoration of Justice Iftikhar Chaudhry. Many say that he used his judicial power for his glory and ditched the PPP’s government constantly. Asif Ali Zardari, President during that time, was against Mr. Chaudhry’s restoration, but Mr. Sharif led a long march to get Mr. Chaudhry restored. Since Mr. Chaudhary’s activism, the Supreme Court has become another power centre. However, overall, the judiciary has a poor record to defend democracy in the history of the country. All successful military coups and martial law government’s actions and amendments in the constitution were legalised by the Court. The history tells that judiciary and military’s unseen alliance did not help to strengthen the democratic institutions in the country in any way.

According to The New York Times, Pakistan’s politicians are not paragon of probity, but corruption is not the main reason for Mr Sharif’s predicament. He has been ousted from prime minister’s position primarily for asserting civilian supremacy over the military and seeking peace with India. Tariq Ali, a Pakistani scholar based in the UK, wrote in The Guardian, “Many are suggesting that the not-so-invisible hand of the army ensured the unanimous verdict of the Supreme Court.”

Former Prime Minister Nawaz Sharif said that there was no reason of his disqualification. He called it a selective judgement and said that he felt proud because his disqualification is not on corruption charges but for something else. Khawaja Saad Rafique, a senior leader of PML-N, boldly said, “We know our crime. We want civilian supremacy.”

Political analysts say, in the coming days, the court will be under pressure for impartial accountability, and to show the same assertiveness to others, including an opposition leader Imran Khan, judges, generals and the civil bureaucracy. Now-a-days, the Supreme Court is also hearing a petition against Mr. Khan for cancelling an offshore company in his nomination papers. Opposition leader Bilawal Bhutto Zardari, Chairman of PPP supported the court’s verdict, but at the same time he demanded for across the board accountability.

Though Nawaz Sharif has gone now, his party has still a majority in the both houses of the parliament, so he would easily bring a new prime minister from his own party. He is still popular in the Punjab province, which is his power base. Therefore, only time will tell whether the establishment has managed to cut Nawaz Sharif to size or not.