By SAM BAKER FOR MAILONLINE

A pigeon has been handed over to police in India after being accused of being a Pakistani spy.

The alleged spy was discovered by Geeta Devi who lives in the Kathua district of Kashmir after the bird flew into her home on May 24.

It was found have been painted pink and was carrying around its foot a ring with numbers on.

The Times of India report that Senior Superintendent of Kathua Police Shailendra Kumar Mishra said: ‘We don’t know from where it came. Locals captured it near our fences. We have found a ring in its foot on which some numbers are written.

The bird was captured by locals near the India-Pakistan border fence and was eventually passed on to the police by the Indian Border Security Force.

The Telegraph reported that police told the Times of India: ‘Though birds have no boundaries and many fly across international borders during migration, a coded ring tagged to the captured pigeon’s body is a cause for concern as migratory birds don’t have such rings.’

The pigeon will remain in police custody until they have finished their investigations.

This is not the first time that a spying pigeon has been caught passing between India and Pakistan. 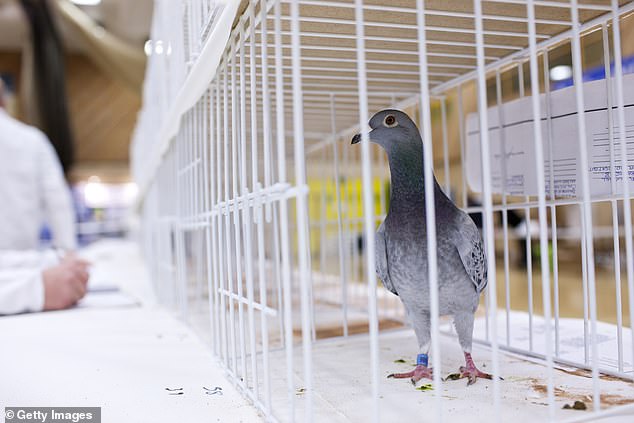 In 2015 another pigeon was intercepted, this time in Manwal village two and a half miles from the border.

It had the message ‘Tehsil Shakargarh, district Narowal’ in Urdu stamped on its tail along with some numbers.

Though an X-ray was carried out on the bird, nothing suspicious was found.

Police kept it in their custody anyway and listed it as a ‘suspected spy’.Read more: