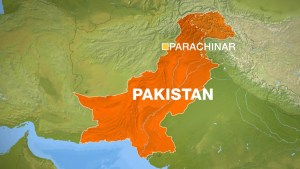 On Friday 23rd June 2017 twin blasts hit the valley of Parachinar the main town of Kurram tribal agency, killing at least 70 people and injuring more than 125 others. The first blast took place around 5:00 p.m. in Turi Market, located on the edge of the recently-designated Red Zone, and the second explosion went off as rescuers and bystanders rushed to help the survivors of the first blast. After the high death rate, angry protesters ransacked the Parachinar Press Club and severely injured five journalists. The police resorted to aerial firing to disperse the protestors. People from all over the Parachinar joined the sit in against the twin blasts, which continued for eight days. Unfortunately, electronic media do not report the real severity of the issue and keep ignoring the Parachinar unrest. Thanks to social media that we come to know about this conflict. There is two principal point of views related to this issue; one is of the people of Parachinar who consider it as a ‘sectarian conflict.’ The other is the State’s point of view that these blasts are the result of terrorism from the cross border.

Before discussing these point of opinion, let us first unfold some history of Parachinar. It is the capital of Kurram Agency and the largest city of the Federally Administered Tribal Areas (FATA) of Pakistan. Parachinar is situated at the neck of Pakistani territory South of Peshawar that elongates into Paktia Province of Afghanistan. It is the next point in Pakistan to Kabul and borders on the Tora Bora region of Afghanistan. Turi, Bangash, Orakzai, Zazai, Mangal and Para Tsamkani are the major tribes in Parachinar, but there is dominant population of Turis who belong to Shia sect. This faction oriented conflict is somehow started thirty years ago when Russian Afghan war was going on, and this area was mostly used by U.S. lead jihadists, but the local Shia population was against their presence. Taliban belongs to the Wahabi sect which is very much against Shia sect of Muslims. After the American invasion of Afghanistan in 2004, it is a most easily reachable point for an entry in Pakistan. In 2007, Taliban started armed fighting in Kurram agency and tried to impose their self-styled Sharia like other tribal areas and kill hundreds of people. The main high way which connects Parachinar with all over the country known as Thal-Parachinar Road remains blocked. The Taliban’s make their check-posts in the Lower Kurram Agency. Communication between Parachinar and rest of the country is almost abandoned as the locals take the dangerous alternative route through Afghanistan for travel to Peshawar.

In 2008, a political agreement signed in Murree and a limited military operation was done in the area has helped to reopen the Thall-Parachinar road but only limited traffic was allowed to move. That agreement seems hopeful for the peaceful resolution of thirty-year-old conflict because it talks about the return of displaced persons, some of whom have not returned home since the 1982 violence, to the payment of compensation for property damaged and destroyed, the agreement encompasses many sensible and pragmatic measures. Also, cell phone services should be restored in the area because presently, locals have to use Afghan SIMs and networks. Frontier Corp FC was deployed here since long, and mostly there is a curfew in the valley. So the basic stance of locals is that government and army are not seriously addressing the situation in Parachinar, there are no basic facilities of life present here, and this area is far behind from the other parts of the country. According to them, the government is doing it deliberately just for the ethnic cleansing of Shia population.

While State’s office said that it’s not true and the recent bomb blasts were planned in Afghanistan, and there is no sectarian division in Pakistan, and it’s our enemies who target our unity. As said by Chief of Army Staff General Bajwa: “Having failed to divide us through terrorism, our enemy is now trying to focus and fragment us along sectarian/ethnic lines which merit a unified national response. For us, every Shaheed/injured is equal, regardless of sect/ethnicity and indeed is a great loss. We all are Pakistanis and Muslims who fully respect the religious rights of our Pakistani minorities.”

In conclusion, it can be suggested that it is not enough to give the condolences after blasts, to pay the compensations for people who died and got injured in explosions. It’s not sufficient to put all responsibility on Afghanistan or India; it is the time that government officials should visit and analyze the present situation of Parachinar and address the concerns and complaints of locals.  A political settlement should be established by the mutual consensus of all the concerned people. Clerics from both Shia and Sunni sects should take initiatives to create a religious harmony between people and society. The government should bring infrastructural reforms in all the tribal areas which will help to address the grievances of the local population. Other than a military operation, the intelligence based operation should be done to establish the long term peace in Parachinar.