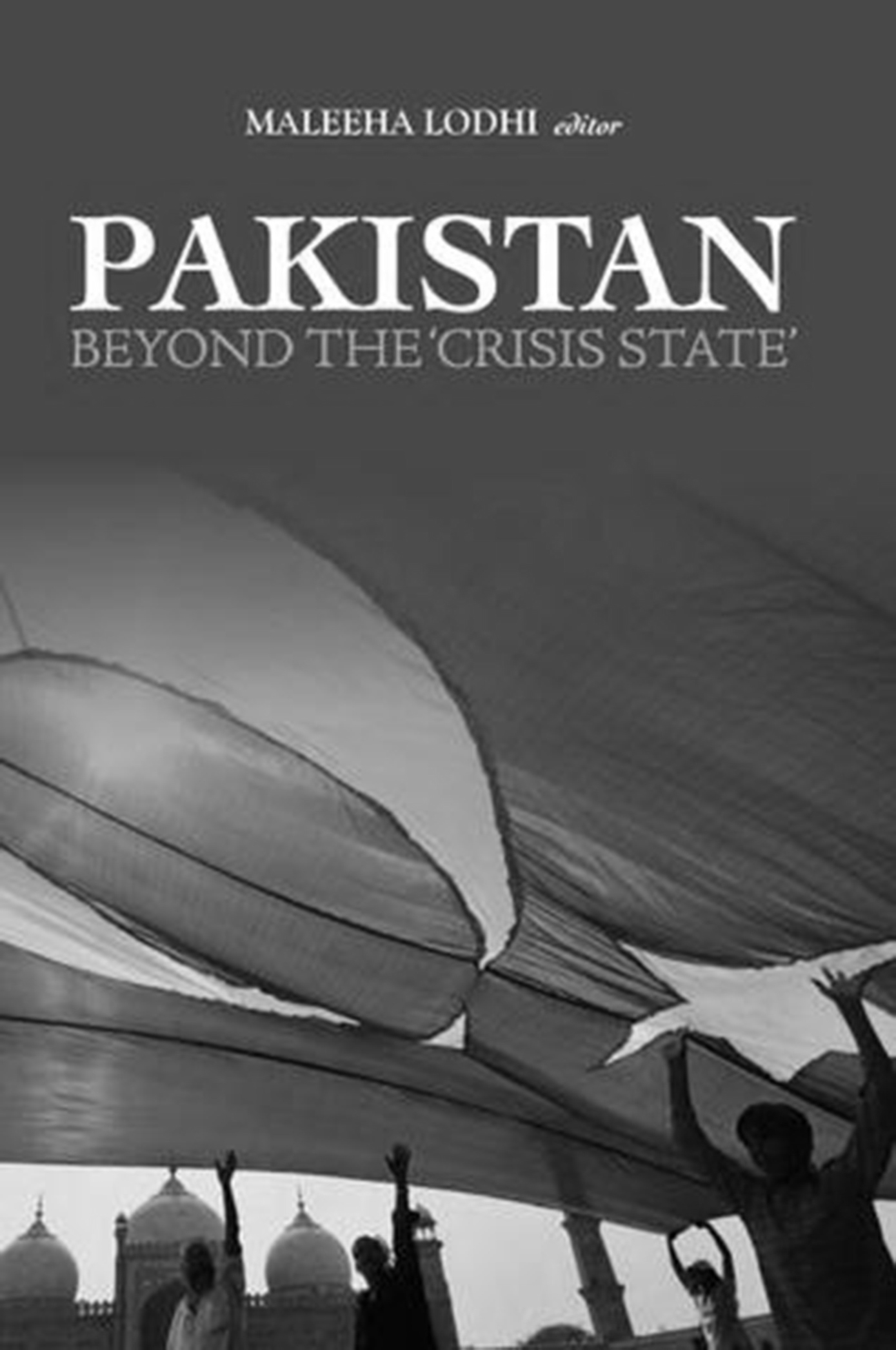 Dedicated to the resilient people of Pakistan who deserve a better future is the underlying theme of the book. Dr. Maleeha Lodhi’s Pakistan Beyond ‘the Crisis State’ is definitely an original and path-breaking contribution to the country’s centrist discourse on the multiple issues faced by it. She challenges the generalizations and status quo and makes a genuine attempt to give an incessant recourse to the people of Pakistan: Hope.

Dr. Lodhi has twice served as Pakistan’s Ambassador to the United States and the United Kingdom. Hence she carries a strong influence and knowledge of the country’s polity and people. Certainly she deserves credit for assembling the articles from experts in respective fields and editing them into a book form.  Some of them are thoroughly well researched while others are opinion articles. All these experts are academics, policy makers, historians, journalists, analysts and bureaucrats, like Ayesha Jalal, Mohsin Hamid, Shuja Nawaz, Ishrat Hussain, Moeed Yusuf, Munir Akram, Saeed Shafaat, Akbar Ahmed, Meekal Ahmed, Feroz Hassan Khan, Ahmed Rashid, and Rifaat Hussain.

It carries a sense of urgency because of the critical nature of the topicality against the backdrop of the entire world theorizing the South Asian Region as deeply troubled, failed and withering. On the other hand, this book carries a very unique message and pays tribute to the common man’s resilience and persistence to survive against all the odds. Voices from several maestros are woven into a cohesive choir in a journalistic fashion to reaffirm their faith that Pakistan’s challenges are surmountable and the impetus for change and renewal can only come from within.

The book has seventeen chapters/articles, and can be divided into five major parts: first it contains historical articles; secondly it pertains to foreign policy; thirdly it refers to the army; fourthly it looks at enhancing the country’s competitiveness while the last part is devoted to several problems faced by Pakistan, e.g. education, militancy, bad governance, energy crisis and economic challenges.

The book starts with the article of renowned historian Ayesha Jalal titled “The Past as Present” in which she highlights the importance of the past in the accomplishment of ethos of generations. Its relevance assumes greater worth and value especially for a nation which has suffered a split not too long ago, i.e. 1971. Thus every Pakistani must understand the genesis of Pakistan to determine their future course.

The second chapter by Dr. Akbar Ahmad titled “Why Jinnah Matters” refers to the importance of the immaculate ideals of the founding father for the consolidation of nascent state which not only were the guiding principles for the nation yesterday but also offer practical solutions for today’s problems faced by the nation, i.e. sectionalism, sectarianism, provincialism and fractionism. Zaid Haider in his article “Ideological Adrift” revisits the historical dimensions of Pakistan’s history with relation to religion, i.e. Islam.

The second part can be classified as the one dealing with the foreign policy of the country in which the eastern side of the border is covered by Rifaat Hussain in his article “Indian Factor” whereas the western side is covered by Ahmad Rashid in his essay “Afghan Conundrum”. Hussain has also given a very detailed table of the CBM history (pp.332-37) in a chart form between India and Pakistan from 1947 to the present. Former Pakistan UN Representative and a maven in foreign policy Munir Akram’s article “Reversing Strategic Shrinkage” talks about the external challenges ranging from the TTP to the Afghan crisis, Kashmir to nuclear deterrence, and from strategic marginalization to strategic paradigm on the geopolitical front.

The fifth chapter ‘Army and Politics’, the sixth chapter ‘Praetorians and the People’, and the fourteenth chapter “Pakistan as a Nuclear State” have been written by Shuja Nawaz, Saeed Shafaat, and Feroz Hassan Khan respectively regarding the country’s most powerful institution, the Armed Forces. These articles cover subjects like civil-military imbalances and the race for nuclear arsenal and weapons which makes this region volatile and fickle from a security point of view.

The army is an important stakeholder of the country in policy making because Pakistan is the prisoner of its geography. It also reminds us of social scientist Hamza Alvi’s superstructure nature of Pakistani society which maneuvers the military to jeopardize democratic institutions for their wasted interests. Shafaat argues that democracy can only flourish if there are free, fair and impartial elections as well as true participation from the people. As an institution it requires cultural pluralism and work ethics to thrive in the country.

“Why Pakistan will survive” by Mohsin Hamid gives a glimpse of hope and presents a spectacular diverse demographic analysis of the Pakistani nation and a reason to coexist as a modern democratic state. It silently makes its readers to take an oath to accommodate each other because we are a unique nation. It also provides viable solutions to the many problems faced by Pakistan provided the nation is committed to pay more in taxes. “Beyond Crisis State” by Dr. Lodhi herself explores the intricate dynamics of the much celebrated location of Pakistan which has been more of a challenge than an asset since the country’s inception.

“Boosting Competitiveness” by Mudassir Mazhar Malik, yields up Pakistan’s potential in terms of its geography, physicality, demographic, environmental, economic, political and natural resources. He also suggests certain pertinent measures to delve into all thes potential and to put the country on the trajectory of growth and development.

The last part deals with the miscellaneous challenges faced by the country in the articles “Retooling Institutions” by Israt Hussain in which he addresses the core of the problem which is institutional bad governance which in turn is mainly because of a corrupt bureaucracy, prevailing indecency in society, lack of accountability and inefficiency of the state machinery. If we crave to modify our system then we need to ensure an efficient mechanism of transparency and accountability as well as bold steps on the governmental and social fronts.

“An Economic Crisis State?” by Mekaal Ahmad reminisces the glorious past when Pakistan was seen as a role-model in economic and developmental programs especially during the sixties. This of course can be revived through effective planning. “Turning Energy Around” by Ziad Alahdad investigates what it will take to turn the energy sector around and how to make an energy-scarce country into an energy-sufficient country.

“Education as a Strategic Imperative” by Shanza Khan and Moeed Yusuf enumerates how education can turn around the entire critical mass to an informed and learned nation. “Battling Militancy” by Zahid Hussain analyses the militant threat and suggests measures to deal with it. In her concluding remarks Dr. Lodhi reiterates and reinforces her fundamental idea of introducing the bold reforms in the country for which she looks forward to charismatic, sincere and visionary leadership which is the need of the hour.

There is very little literature produced in recent times that has touched upon the potential of Pakistan in terms of its physical resources and human potential when the nation is in real hot water facing internal and external discords and challenges. Sartaj Aziz’s book “Between Dreams and Realities” and Yusuf Nazar’s book “Balankanization and Political Economy” also attempt to restore the confidence and potential of the nation and the idea of formation of Pakistan. The former book is an historical-cum-biographical account whereas the latter touches upon the issue pertaining to the economy of the country.

Dr. Lodhi’s book is a tour de force due to its multi-dimensionality and holistic approach of synthesizing all the issues along with their solutions and the strategies to tackle these daunting tasks because, as Lodhi solemnly concludes, “but Pakistan’s people deserve no less.”