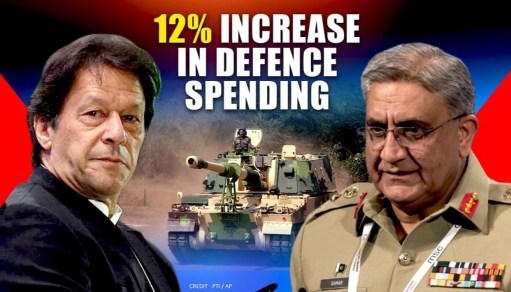 Last month the federal government of Pakistan announced its annual budget 2020-21 according to which Rs.1, 289 billion has been allotted to the defence sector. The defence budget has increased by 11.9% in the fiscal year 2020-21. However, if compared with the 2019-20 revised spending, which was Rs.1, 227 billion, the growth would be 5%. The increasing tensions between India and Pakistan post-Pulwama and the Kashmir issue are one of the main reasons behind this increase in defence spending. The defence policy of Pakistan and military spending have always been India-centric. Hence Pakistan being a much smaller state in order to maintain the conventional balance vis-à-vis India has to enhance its defensive capabilities, e.g. short-range weapons. Due to the volatile, complex and ambiguous strategic environment, military spending is essential for Pakistan.

According to the defence budget of 2020-21, the share of navy has increased and reached 10.85 %. Similarly, PAF budget has been increased to 21.25%, the army budget has increased up to 47.55%, and there has been 20.33% increase in the budget for inter-services establishment. Whereas last year the navy’s share was 11.3%, while for PAF it was 22%, for army 45.4% and 21% was for the inter-services establishment.  This year Pakistan navy gets Rs.140 billion, PAF Rs.274 billion, army Rs.613 billion and Rs.262 billion will be given to inter-services establishment. Moreover, for the employee related expenses Rs.475 billion have been allocated, Rs.301 billion will be given for operating expenses which include ration, transport, POL, training and medical treatment-it is 13.77% increase as compared to the previous year. For the import of arms and ammunitions and local purchases, Rs.357 billion have been allotted, which is 13.3% increase as compared to the previous year. The civil works section will grow by 26.14% as the amount allotted to it is Rs.155 billion. The growth in the civil work component was essential because of two major projects that are currently being commenced by the military i.e. the construction of border posts and fencing of Afghanistan and Iran borders. This year the lowest increment is given to the employee related expenses which are 5.6%.

In the developing states which have various military and strategic issues, the effect of military spending upon the economic growth has always been controversial because of continuous tensions between foreign policy and defence compulsions on the one hand and socio-economic needs on the other. However, according to the classical economist Adam Smith “The first duty of the state is to protect its society from the injustice and violence of the other societies as it moves towards civilization”. Despite limited resources, the Pakistan army has been fighting successfully on both the borders in the east and west. About 800 million dollars is the expected cost of the border security plan. Moreover, for years Pakistan army and law enforcement agencies have been fighting against terrorism, operations like Zarb-e-Azab and Radd-ul-Fasad are among the great achievements in the mission to eradicate terrorism from the country. Hence principle responsibility of every state is to enhance its defence forces for the sake of survival and to maintain sovereignty. Hence for Pakistan in order to tackle with these internal and external threats, it has become necessary to increase its defence budget.

The continued animosity and strategic competition between India and Pakistan are also one of the main reasons that Pakistan had increased its defence budget by 11.9% in the ongoing fiscal year. Both countries were at the verge of war after the Pulwama incident when Indian aircrafts entered Pakistan. It was due to the timely and effective response of the Pakistan air force that forced Indian jets to flee, and the situation did not escalate. Hence Pakistan must maintain the strategic parity and conventional balance in order to deter India. India has enhanced its defence spending by 6% this year. According to the SIPRI (Stockholm International Peace Research Institute) annual report, India has the third-largest military budget in the world. The excessive Indian defence spending creates a security dilemma and compels Pakistan to maintain a precarious military balance by increasing its defence spending. According to the recent budget, Pakistan’s emphasis would be on procurement of the equipment’s to enhance air defence capabilities, improve operational capabilities of the naval fleet and to advance surveillance and communication systems. Pakistan needs to protect itself with all the available means after looking at the grand designs of India. The basis of defence planning has always been threat perception. Moreover, when one has to defend itself against a much larger enemy with the comparatively weak resource, even minimum sufficient defensive capability can only be attained through attaining massive share of the nation’s resource.

Currently, Pakistan is facing different challenges and threats to its security posed by its long-term enemy India. Given the growing tensions among both countries Pakistan has increased its military budget 2020-21 in order to maintain strategic balance in the region vis-à-vis India.