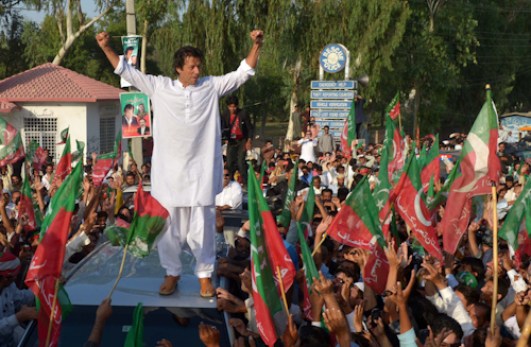 Pakistan’s General Elections are scheduled for mid-July 2018 but the perspectives on it remain clouded in that in the run-up what has become abundantly clear is that the Pakistan Army-Supreme Court Chief Justice Combine carried out a “Judicial Coup” and thereby attempting scripting the outcome by pre-empting the return to power of Former Prime Minister Nawaz Sharif by an unprecedented verdict of his ‘Disqualification for Life.”

Before a further analysis of perspectives of Pakistan General Elections 2018 is attempted what needs to be flagged is that the future of Pakistan’s democracy is at stake. The Pakistan Army got the jitters at the prospect of Former PM Nawaz Sharif completing a full five year term in office. Fortunately, the Pakistan Army had in place a Supreme Court Chief Justice with identical aims and the result was not only the unseating of the Prime Minister but also his ‘Disqualification for Life”. That prompted my Paper in Julyn2017 entitled “Pakistan Army Graduates from Military Coups to “Judicial Coups”. The last named term thereafter entered public discourse.

Also needs to be flagged is the fact that how long can the Pakistan Army continue to dominate civil-military relations in Pakistan and determine the course of Pakistan’s political destiny? Pakistan General Elections 2018 do not foretell that a change is around the corner. Till that political dawn materialises Pakistan’s political dynamics will see no change.

Pakistan’s first military dictator initiated the concept of “Guided Democracy” for Pakistan and the Pakistan Army is intent on a continuance of its divine right to ‘Guide Pakistan’s Political Destiny.” It is a pity that whatever civil society that exists in Pakistan could not galvanise the Pakistanis- at- large to overturn this self-proclaimed dubious role.

Contextually, the above overhang needed to be highlighted before attempting to explore the relevant perspectives that emerge in the confused and complex political dynamics at play on Pakistan’s domestic scene. The above overhang generates a number of political developments that could likely determine the final outcome of Pakistan’s General Elections in July 2018.

With the new Pakistan Army-Judiciary Combine at play in Pakistan for last couple of months and which seems determined not only to prevent the return to power of Former PM Nawaz Sharif but also to return to power of Pakistan Muslim League-N to power, this has spawned two political developments. The Army-Judiciary Combine has signalled that the favoured Establishment’s Political Party is Imran Khan’s Pakistan Tehreek-e Insaaf Party (PTI).

Pakistan Army has an intense dislike for Former PM Nawaz Sharif for two reasons and what it perceives is that Nawaz Sharif is inclined to encroach on Pakistan Army’s traditional turf of foreign policy towards India and changing existing equations in civil- military relations. Reconciliation with India and development of friendly relations with India has been in the past the electoral plank of Nawaz Sharif.

In Pakistan’s traditional ‘Lota Politics’(defections) this has magnetised the PTI as the natural choice for all defectors from PML-N willing to cross-over to the perceived favourite political party of the Establishment. However, the number of such PML-N defectors is not too large. It mainly is composed of politicians of Southern Punjab wanting a separate State. On current indications, Former PM Nawaz Sharif and his PML-N party’s strongholds in Heartland Punjab seem to be intact.

If that be so, then what becomes debatable is whether the political script choreographed by the Pakistan Army-Supreme Court Judiciary Combine to prevent the return to power of PML-N would hold good or unravel? It can only hold good if the Establishment resorts to wholesale rigging. The Establishment in such an eventuality would have to run the gauntlet of the Pakistani media-watch and international observers.

Moving to the personal popularity of the political leaders of the three major Pakistani political parties former PML-N PM Nawaz still leads over PPP’s Zardari and PTI’s Imran Khan, despite the Pakistan Supreme Court’s political disqualification. Zardari may have been President of Pakistan in earlier years but has no widespread political support in Pakistan. The same applies to Imran Khan.

Perceptionaly, Former PM Nawaz Sharif being prosecuted on flimsy grounds by the Supreme Court emerges as a political leader grievously wronged by the Establishment and hence will be seen as a ‘political martyr’. How much political capital accrues to Nawaz Sharif because of the foregoing will become evident only in end-July 2018.

Because of the Ramzan period which ended last week hectic political activity was not noticeable, but now it can be expected to pick up and also become acrimonious because of the high stakes involved for all major political parties and moreso for the Pakistani Establishment whose single-point agenda has been to prevent the return to power of PML-N conscious of the fact that even with Nawaz Sharif politically disqualified, he would still continue to be the Mentor-in-Chief of the PML-N alternatively led by his brother Shahbaz Sharif.

Political analysts in Pakistan are worried that voter turn-out in General Elections 2018 may not be all that high because of the July weather and maybe possible heavy rains. In Punjab this could affect the PML-N traditional vote banks. But the reverse side of this aspect could also be a reality that Pakistani voters in Punjab may turn out in larger numbers impelled by the belief that Nawaz Sharif has been wronged by a politically-activist Chief Justice of Supreme Court straying into Pakistan’s political minefields perceptionaly his own or at the behest of the Pakistan Army.

Pakistan’s General Elections are also susceptible to influences of major external powers that may not directly intervene to determine the outcome of the elections but resort to other means still to protect their national interest. The United States and China have the biggest stakes in the outcome of Pakistan General Elections 2018. The United States present interest in Pakistan is in relation to US military presence in Afghanistan where the Pakistan Army is the major disruptive factor. China has major strategic investments in Pakistan far outweighing those of the United States. China has effectively colonised Pakistan today.

Both the United States and China prefer to deal with the Pakistan Army in power or a political party enjoying the support of the Pakistan Army. But it cannot be forgotten that China’s prestigious $ 64 billion China Pakistan Economic Corridor was concluded with PML-N Government in power headed by Former PM Nawaz Sharif.

Not visible on the electoral scene in Pakistan with just a month to go for General Elections 2018 is heated and hectic election campaigneering. Many reasons contribute towards this phenomenon. In the recent past the Pakistan Establishment has clamped down hard on media personalities including forced disappearances of journalists, including women. Within Pakistan, it is being speculated that the Establishment has thrown many subtle hints that the PML-N should not be given prominence in coverage.

The other plausible reason could be a sense of weary resignation within Pakistan that the election outcome is a foregone conclusion in that the Pakistan Army-Supreme Court Judiciary Combine will ultimately have is way according to their scripted version.

There is another scenario in which the Pakistan Punjab electorate unmindful of the Establishment’s preferences votes back PML-N to power both in Punjab and in Islamabad. What would then be GHQ Rawalpindi’s options? Accept the verdict or engineer another constitutional breakdown?

In Conclusion, what emerges from the above perspectives is that Pakistan’s political landscape will remain clouded not only in the run-up to General Elections2018 but possibly shortly thereafter. In the overall analysis, the final outcome of Pakistan’s General Elections is not determined by the verdict of the ballot boxes but by Pakistan Army’s jackboots and regrettably in 2018 even by the tilted scales of Justice of Pakistan’s highest Judiciary in the persona of the politically activist Chief Justice of Pakistan Supreme Court.