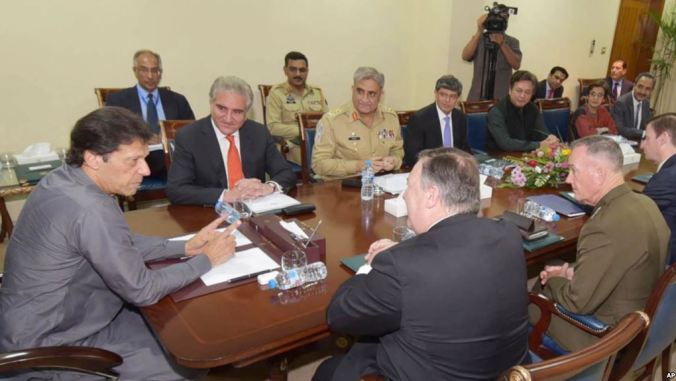 Pakistan-US relations have witnessed a severe decline especially after January 2018. Earlier this month, US Secretary of State, Mr. Mike Pompeo, who was accompanied by Chairman of the Joint Chiefs of Staff Gen Joseph Dunford, stayed in Islamabad for nearly five hours during which he met Prime Minister Imran Khan, Foreign Minister Shah Mehmood Qureshi, and Chief of the Army Staff Gen Qamar Bajwa in anticipation of resettling the deteriorating bilateral relations.

During the visit, Pakistan and the United States decided to reset the bilateral ties by giving another shot after the initial positive engagement which resulted in an understanding between the Trump administration and the new Pakistani government on delivering on each other’s expectations.

A positive aura was established during the meeting signaling an encouraging way forward for the relations by both countries. Hopes were paved in finding solutions to the common problems of both countries, e.g. Afghanistan. Initially, the goodwill signaled optimism following a press conference by Pakistan’s FM. FM described how “positive” the meeting had been and is sure to bear fruit in future. Hopes were established on matters resolving between the two countries.

It was not long before the situation started to revert. Mr. Pompeo visited New Delhi the very next day after which a joint statement was released at the conclusion of the US-Delhi 2+2 dialogues. The report made clear that everything Mr. Qureshi had painted in regards to the new set of Pak-US relations was worth no serious consideration. Both Delhi and Washington revealed to “have trained their guns towards Islamabad on the counter-terror front. They held, without vague signals or hidden intentions, Pakistan responsible for the spread of terror through proxies. They named groups with Pakistani affiliations and have recalled past events like Mumbai, Uri, Pathankot to point to the alleged plots of terror whose perpetrators need to be brought to book”. A new series of the strategic partnership was also vowed to have begun between India and the US to counter the growing military and economic strength of China (and/or Russia) in the region with massive arms trade treaties and other military assistance for each other during the visit.

Pakistan’s Foreign Office denied these allegations quite late- a week after they were presented. The delay helped paint yet another bleak picture on the strength of Pakistan’s international standing- giving a chance to the critiques to point out Pakistan’s shortcomings in foreign affairs.

In the scenario, as mentioned above, what strikes the mind is that if Washington was serious in helping Pakistan out of the Afghanistan problem and establish fresh start to relations, it should have restrained India’s aggressive design. The US had given a surety of security to Pakistan from the Eastern front to let Pakistan focus on stabilizing the Western front in Afghanistan by engaging with the Taliban to harbor a peace process. On the contrary, Washington has sandwiched Pakistan between two hostile neighbors from the east and the west creating a security dilemma or a stalemate for Pakistan both militarily and diplomatically.

Washington was fast to allege Pakistan of leaving terrorist harbors in Afghanistan and not doing action against them, but when it had to help Pakistan make sure in achieving victory in Afghanistan (its interest), it reverted the game by picturing Pakistan as the biggest problem.

Pakistan currently is in no position to create enmity with a regional power- India with the championship of a superpower- the US to make it difficult for an economically, politically strained country- Pakistan for the ability to counter it likewise.

A popular notion among the masses of Pakistan is that China or Russia may prove to be better allies to help Pakistan despite the US backing out so prominently. This too is an unreliable dimension since Islamabad’s ties with Moscow are not well enough for Moscow to jump into any military fallout faced by Pakistan in assistance during the foreseeable future.
On the other hand, China, if history is studied, has never set an example of backing Pakistan militarily in the times of need against India. China will never perturb its economic ties with India to help Pakistan out. In this scenario, it is not Pakistan that can determine Chinese or Russian assistance for itself, but China and Russia themselves decide how much they can bear for Pakistan keeping their interests safe.

This valuable lesson was not learned by Pakistan’s government when none of our perceived friends countered Pakistan’s nomination in the FATF grey list by the US. It does not seem to be popular even now when Pakistan is facing a severe strategic threat from both its sides.

Pakistan is facing severe ramifications in its diplomatic as well as strategic arena with the abruption of expected hostility from Delhi and Washington. This is a crucial time where we need to shift our focus towards our foreign policy instead of taking a cloak of false ego under the slogan of “Pakistan First” addressing internal matters like the dam fund or tree plantations rendering to be more critical.

Pakistan-US bilateral relations are on their lowest ebb in history where vague prospects are being witnessed. US’s intention to remain significant in the region coupled with its aim to contain China (and/or Russia) in the region has sought it to develop its partnership with India. This partnership has severe implications for Pakistan, foreseeing no future betterment in relations with the US in the short term to the midterm time frame. US relations with Pakistan currently are focused more on re-stalemate rather than resettlement.

It is therefore direly vital for Pakistan to shift its focus on severe issues like its international standings, diplomacy and international strategic partnerships rather than little internal matters. A wake-up call is needed for the government to address this issue on priority and stop living in an age of self-deception that is intentionally promoted at the price of the reality.