Pakistan: Plan of Action of the New PTI Government 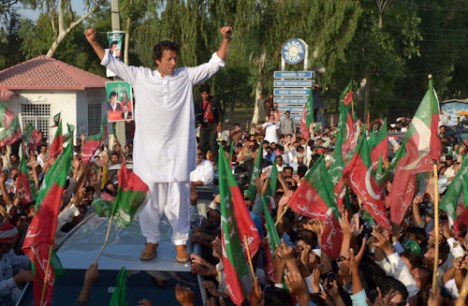 Pakistan faces complex challenges, both external and internal, that needs bold actions by the new PTI government. Determined leadership and resolve by the new government can set the direction for the next five years. It is imperative to get it right the first time around. Much is expected from the PTI by the people of Pakistan. It is crucial that some early success is achieved for setting the direction of the government. This list is not exhaustive by any means but can become a good beginning for the new government.

1. Pakistan’s economy suffers from a severe budget deficit situation compounded by a balance of payments crisis. An IMF bailout is necessary. But the IMF is notorious for its stringent conditionalities which can cause a public reaction. Pakistan has no choice to revamp the FBR on a priority basis. Also, improve governance issues to increase the pitiable exports. Distressed economic conditions require bold actions from the new PTI government. The new PTI govt must focus on stabilizing the economy on a priority basis. End corrupt practices in the economic sector. For example, Benaami property done recently in India. Attach these properties with the state authorities.

4. Standardization of weights, measures, and the like. For example, stop using Arabs, crores, and lakhs and use only millions, billions, and discard the use of maunds only kgs allowed.

5.  A detailed Plan of Action to be prepared within a month to strengthen critical institutions like State bank, FBR, AGP, NACTA, IB, FIA, NAB, FPSC, etc.

9. Pakistan to emphasize the strengthening of relations within the frameworks of ECO, SCO, SAARC, and OIC as a priority

10. Formation of a think tank to conduct research and guide the PTI utilizing the Next Steps approach and acting as a consultancy (see separate page for details).

11. Forming a steering committee of experienced professionals in various areas to guide the PTI government on multiple issues. These groups will be responsible for the actualization of the PTI policy in numerous fields.

12. Give the right to vote to overseas Pakistanis. Thereby the diaspora will be better connected with the motherland A few seats be given in the National Assembly for which the entire overseas community be considered as a single electoral constituency and vote be given on Party List basis.

13. Endpaper mills in the private higher education sector where rampant corrupt practices exist. Higher education may not be employed to make quick and easy money anymore.

14. The Modernization Unit to be established in the office of the prime minister, as given in the PTI manifesto, be tasked to formulate Key Performance Indicators and metrics for all public sector agencies and departments. A Key Performance Indicator (KPI) is a quantifiable value that determines how effectively an organization is attaining key goals. The KPIs are employed by organizations to calculate their success at achieving the established targets.

15. The federal government is consolidated into a smaller and more effective administration. Some public agencies are bloated and need to be cut. Some departments may need to be merged or even dismantled. A review is held for the purpose.

16. A Task Force be established to restructure vital public enterprises like WAPDA, PIA, Steel Mills, NHA, Railways. A restructuring exercise is carried out to improve efficiency in collaboration with the Modernization Unit in the Prime Minister office.

17. Technical schools are established on the pattern of Germany, preferably with the help of the German government. The purpose is to impart skills to youth not able to get a regular college education.

19. Mainstreaming of erstwhile jihadist elements be carried out on a priority basis in collaboration with the military. A special task force is established for the purpose.

20. The merger of erstwhile FATA into KP be carried out on a priority basis. A Steering Committee is established for the purpose. A federal minister and governor KP head the committee. It must also have CM KP and all PTI MNAs as members.

21. The revival of the Musharraf era Local Government System, as it showed promise. Despite shortcomings, some crucial developments did take place in this area, and there were some success stories at the local level.

22. The national crusade against “qabza” mafia and encroaches must be carried out. This is an endemic problem in Pakistan and has grown in the last decade. While not just private space but also public space is threatened. That is most unfortunate. Public space is a sacred trust.

23. A national curriculum is devised with input from all stakeholders. It must be flexible though to incorporate regional diversity. A framework would be formulated with a common core for the entire nation (1/3) and then a regional section to be the responsibility of the provinces (2/3). The purpose is to create national unity and cohesion. The framework will establish the teaching units regarding syllabi, timetables, modules for class instruction, the total study period, and testing.

24. There was a mushrooming growth of housing societies in the past decade or so. Most of these are scams, and people have lost billions of hard earned savings. The State must come to the rescue of the public and take these swindlers to the task. It must then merely nationalize these societies and give them under the control of various state authorities. The nationalization would be considered as the last resort since it would require an act of parliament.

25. A National Health Service on the pattern of the UK. The founding principle shall be that the service is comprehensive, universal and free at the point of delivery. However, patients would be required to pay prescription charges with a range of exemptions for the poorest of the poor. This is a costly endeavor and will require substantial allocations of budgeted money. This measure, along with health, is one of the fundamental objectives of the Islamic welfare system. Therefore, allocate 5% of GNP to the health services sector.

26. The South Punjab promise be carried out immediately. A Task Force be established for the purpose Later, Pakistan must be divided into at least ten provinces. Punjab into three: central, north and south. Sindh into two: north and south, and so on.

27. Privatization of Public Sector Enterprises is postponed for at least a year. Focus on improving the performance of these enterprises instead. Giving of enough autonomy and removal of unnecessary political interventions is the key to the success of this effort.

28. Merge all department and services housing authorities like Police, Parliament, Defense, into a single Federal Employees Housing Authority. Announce entitlement of all employees for housing as a priority.

29. The focus of the performance of police services. Depoliticize them immediately, especially in Punjab and Sindh. Employ technology to improve police efficiency. The detailed plan needed to revamp the police services and stop political interference immediately. The public has a low opinion of the police service except for KP. Establish a Taskforce for Improving Police Services with input from capable retired police officials and foreign experts.

30. The parliament’s performance is inadequate and needs to be improved. The oversight function of the parliament is insufficient, at best. There is nothing more political than passing the budget as it deals with the allocation of scarce resources. Therefore, present the budget at least three months in advance of its passage date. The budget is discussed on the floor of the National Assembly in the first reading and then sent to Select Committees to be debated in detail with department heads, and outside experts and witnesses. The budget is agreed within these committees along with recommendations. The budget then is again debated on the floor of the house and eventually passed. Establish a separate television Parliament Channel within PTV to broadcast live the working of the parliament. The purpose is to improve the quality of deliberations in the legislature.

31. Revamp civil services as a priority. Give tenure protection to postings for at least three years. Stop the shuffle dupe of endless postings as it causes service inefficiency and disruption.

32. Increase the retirement age of the employees to 65.

33. Give life tenure to the higher judiciary so that the judges can concentrate on their jobs.

34. Focusing on employing technology in governance (electronic governance measures) can significantly improve the effectiveness of not all public services but also Legislature and Judiciary.

35. Give the Prime Minister House to the Foreign Ministry of Pakistan

36. Take over the fund to construct Diamer Bhasha and Mohmand dams from the CJP immediately. Mobilize the public within the country and the global diaspora community for donations. Meanwhile, build much smaller dams immediately on the Indus river system

37. Plan to build new cities to decrease the pressure of rural to urban migration on the big urban areas.

38. Have comprehensive master plans made or revised for better land management of all urban areas.

39. Land records be in digital format a single land authority

40. Initiate an austerity drive in the federal and the provincial governments immediately. Cut the budget of these government outlays, including defense, by 20% instantly