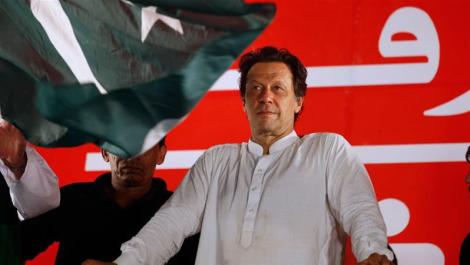 General elections were held in Pakistan on July 25th, 2018. The elections were held after successful completion of five-year term by the outgoing government. As a result of the elections, Pakistan Tehrik-e-Insaf (PTI) – party led by ex-cricket captain turned politician, Imran Khan turned out to be the single largest party at the national level and by popular vote.

Numerous countries and organizations expressed their views about the elections. India- the perceived foe of Pakistan- had good words to say. Prime Minister Narendra Modi contacted Khan and congratulated him on the success of his party in the elections. Modi showed hope that democracy will fortify in Pakistan. He also reiterated his idea of peace and development in the South Asian neighborhood. The spokesperson from Ministry of External Affairs (MEA) of India Mr. Raveesh Kumar expressed hope for amicable bilateral relations with Pakistan and said, “India desires a prosperous and progressive Pakistan at peace with its neighbors. We hope that the new Government of Pakistan will work constructively to build a safe, stable, secure and developed South Asia free of terror and violence.” Indian MEA also mentioned, “the people of Pakistan have reposed their faith in democracy through general elections.” According to the previous Indian Chief Election Commissioner S. Y. Quraishi, also a member of the international observers’ group in Pakistan, the election system was transparent, free and fair.

International organizations like the United Nations and European Union also expressed a favorable view of the elections. U.N. spokesperson Stéphane Dujarric applauded the Election Commission for their managerial efforts, observing positive verve related to training and hard work to improve the inclusion of women, people with disabilities and other marginalized groups, as well as first-time voters, in the electoral progression”.

A European Union delegation as observers was present in Pakistan during the elections. The EU’s observing delegate Michael Gahler giving thoughts on the election process said, “The election results are credible.” The Free and Fair Election Network, an election watchdog, commented “the 2018 polls were more transparent in certain aspects compared to the previous elections. Significant improvements in the quality of critical electoral processes inspired greater public confidence”.

The U.S. State Department, even though had no observers in Pakistan during the elections because of security concerns, yet refused to confirm that the elections were free and fair. The State Department expressed concern over reports regarding limits on freedom of expression before the polls. It was said the U.S. would look for opportunities to collaborate with the new government “to advance the goals of security, stability, and prosperity in South Asia.” State Department spokesperson Heather Nauert congratulated the Pakistani nation, prominently the women, for mustering up the courage to vote despite the violent circumstances surrounding the election.

It is to be commented here that the U.S. has always been a keen supporter of democracy in Pakistan since the nations have been allies. During this period of successful democratic transition in Pakistan, the U.S. should have supported Pakistan on the achievement instead of rejecting the outcomes entirely.
Pakistan- U.S. relations have not been cordial after the rise of the Trump administration, particularly after January 2018. The spillover effect is being produced by the rising Imran Khan government, which is not perceived as positive by the U.S. Department of State.

It is suspected that the U.S. has reservations over Khan’s regime alleging it to be anti-U.S. and pro-Taliban. After the warning of U.S. Secretary of State Mike Pompeo to the new Pakistan government, the officials have said that Khan can complicate negotiations between American diplomats and the Taliban about ending the war in Afghanistan, fraying an already tense relationship between the nuclear-armed Islamic nation and the Trump administration. The U.S. now wishes to conclude the war in Afghanistan by initiating talks with the Taliban. The U.S. direly needs Pakistan’s help in this process since Khan is on better terms with the Taliban. It is also expected that the Taliban might listen to Khan rather than the U.S. itself towards a peace process.

It is better for both countries to mediate the problem of Taliban in Afghanistan such that if it concerns the U.S., it has equally been a security and strategic threat to Pakistan. This is a very reliable dimension through which the worsening Pak-U.S. relations can be bettered, if at all.

An effort is to be made from both sides towards better relations between the two counties once again. The U.S. should opt for the acceptance of the new Pakistani government and harbor better terms with it. It should accept the election results and lend a hand of cooperation for stronger democracy in Pakistan. The U.S. should take note that even India, Pakistan’s perceived foe since its birth has sought a positive image towards the new government whilst expressing good hopes. Even the U.S. led U.N. has a positive view regarding the whole process. The U.S. should give a chance for Khan to collaborate in the areas of mutual interests such as the war in Afghanistan.

On the other hand, Pakistan should try and remove the reservations the U.S. has over the newly forming government and the Taliban issue. Pakistan should support the U.S. in ending this war as it has done in history. It is particularly necessary for Pakistan to improve its relations with the U.S. as they have been important allies since long. The relations cannot be and should not be compromised by Pakistan since addressing terms with the U.S. are critical for multiple reasons.

Pakistan needs a friend like the U.S for its interests. It cannot expect to cut all ties with it and put all its eggs in one basket- China. It is to be taken into consideration by the new government to remove the reservations the U.S. has and work positively on something both nations will highly benefit from.