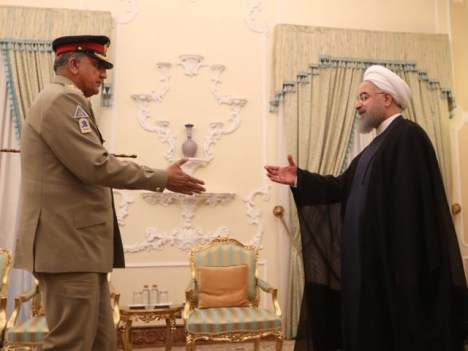 His arrival in Tehran was announced by military spokesman Maj Gen Asif Ghafoor through a tweet. No formal statement was, however, issued revealing the caution with which the two sides are dealing with the visit that is seen by many as a major development in bilateral relations.

It is expected that besides his meetings with top Iranian leadership, the army chief would also meet Iran’s Supreme Leader Ayatollah Khamenei.

Key concern in Islamabad vis-à-vis Tehran is the growing Indian influence in Iran, which has predominantly been on the economic and trade side. There have been suspicions about India using Iranian soil for espionage in Pakistan. Tehran, meanwhile, is worried about presence of terrorist groups along the Pak-Iran border that have been targeting Iranian border forces.

Islamabad further has reservations about Tehran’s involvement in disputes in Arab world. Iran on the other hand suspiciously looks at Pakistan’s close ties with Arab monarchies.

Gen Bajwa has since the early days of his tenure worked on improving relations with Tehran. In this regard, he met Iranian envoy to Pakistan Mehdi Honardoost several times over the past few months – at least three of which were made public. His approach towards Iran was driven by his understanding that “enhanced Pak-Iran military-to-military cooperation will have positive impact on regional peace and stability”.

The move for improvement in ties has been necessitated by evolving regional situation particularly the emergence of the militant Islamic State group as a major security threat and US plans for an open-ended stay in Afghanistan, which both sides see as detrimental for their interests in the region.

Director General Noor Institute of Strategic Studies Tehran Dr Sadollah Zarei, speaking at Islamabad Policy Institute, said: “Trump’s new policy for the region has made it all more important for the two neighbours to cooperate.”

Iran was one of the few countries to voice support for Pakistan after the latter was severely criticised by President Trump while unveiling Washington’s new policy for the region. Later Foreign Minister Khawaja Asif toured Tehran as part of his visit to regional countries for consultations on Trump’s policy.

Dr Zarei said there was a strong desire in Tehran for better relations with Pakistan.

Earlier visits by Gen Raheel Sharif (2016) and Gen Pervez Musharraf (2000) were not official visits by the army chief. Gen Raheel had accompanied the then prime minister Nawaz Sharif on a trip to Tehran for attempted mediation between Saudi Arabia and Iran, whereas Gen Musharraf went there as the country’s chief executive for participation in ECO Summit.

Analysts believe the start of a military dialogue between Pakistan and Iran would grant credibility to Pakistan’s policy of neutrality in the Middle East/Gulf even if they aren’t immediately able to make major strides towards better relations.