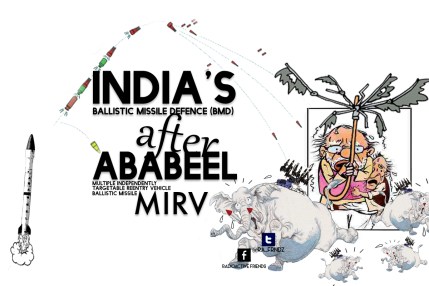 There was a time in human history when nuclear technology was the “it” technology; no one could imagine anything beyond it. The destruction and wrath it brought were not only terrifying but mesmerizing. It was fascinating for ordinary people, leaders, scientists and states that the smallest particle of matter upon breaking can release energy which could burn down a whole city in seconds. Thus, the invention of nuclear weapons changed the way of thinking of nations, states, and leaders. Mastering the fission of radioactive atom to enable it to release energy is not a child’s play; states invest billions in currency to make nuclear weapons.

At the operational level, a nuclear weapon requires delivery systems. In this regard, strategic bombers, ships, submarines, and missiles are commonly used delivery vehicles by the states. But, one of the most significant and reliable delivery systems is missiles, With missiles, states can launch nuclear payload from their territory or any other place without risking its human resource, in case of sending bombers. Missile technology all around the world is growing by leaps and bounds. After nuclearization, both Indian and Pakistan pursued missile technologies including ballistic missiles, cruise missiles, ballistic missile defenses, Multiple Independently re-entry targetable vehicles and inter-continental ballistic missiles as well. States invest in nuclear weapons because it helps them achieve deterrence which stops states from using nuclear option due to fear of unacceptable damages to one’s vital interests. However, to endorse credibility of nuclear weapons, states invest in military modernization.

The main objective behind nuclearization of Pakistan was to create deterrence against India but without indulging in an arms race. Thus, the policy of minimum credible deterrence was developed by Pakistan. Later on, after India’s attempt to exploit the levels beneath the nuclear threshold, Pakistan resorted to the policy of full spectrum deterrence without going for an arms race. So, to create credible but minimum deterrence at the start of the year 2017, Pakistan tested multiple independently reentry targetable vehicle (MIRV), which can deliver multiple nuclear warheads in one go.

Development of MIRV by Pakistan is neither consequence of ambitious national objectives nor is it meant to initiate an arms race in the region. But, it is to make nuclear deterrence viable against India’s BMDs which can intercept incoming ballistic missiles through interceptors and destruct them in the air.
Pakistan, due to its economic restraints could not go for BMD in response to India; as it is an expensive technology that has yet to achieve 100% success rate. So, considering its options, MIRVs came out as the most rational choice. However, MIRVs are one of the most complex technologies in which missile can carry more than one warhead in a single launch and with the capability to hit multiple individual targets. They require technological sophistication in not only sending so many vehicles in one launch but also in yield and most importantly inaccuracy. With enough yield and accuracy, MIRVs provide states the capability to go for pre-emptive strikes. Thus, MIRV can overwhelm the BMD system and resultantly eliminate the false sense of security under which India could go for the first strike.

To increase the accuracy of MIRV missiles, Pakistan bought highly sophisticated, large-scale optical tracking and measurement system from China. According to a national news agency, Pakistan has deployed this advanced technology in the battlefield. Before Chinese system, Pakistan was utilizing indigenous systems. Nonetheless, it will help Pakistan record high-resolution images of a missile’s departure from its launcher, stage separation, tail flame and, after the missile re-enters the atmosphere, the trajectory of the warheads it releases.These functions will be possible because the system bought by Pakistan comes with a pair of high-performance telescopes equipped with a laser ranger, high-speed camera, infrared detector and a centralized computer system that automatically captures and follows moving targets. However, what makes this system unique is its ability to detect missile up to a range of several hundred kilometers through the help of its telescopes. The timing of these telescopes is precisely synchronized with the atomic clock. Thus, now Pakistan can track different warheads going in different directions simultaneously. Moreover, through visual imagery, the missile developers can improve the accuracy and design of missile in the much better way.

So, with this technological uplift, Pakistan will soon add Ababeel (MIRV) into its operational missile inventory. But, these actions by Pakistan are not to give rise to arms race rather they are the reactions to the actions taken by India. BMDs by India never strengthened nuclear deterrence or stability rather they eliminated the deterrence by nulling the credibility of ballistic missiles. As a result, to maintain the credibility of its deterrence through minimum means, Pakistan opted for MIRV, as missile tracking systems are essential in improving the accuracy and designs of missiles. If anything indicates arms race in the region, it is India’s ICBMs, naval nuclear fleets and space weaponization.