What Obama Wants From India 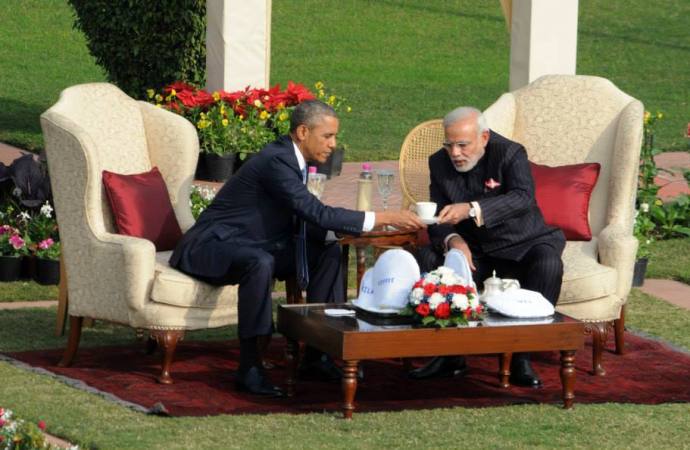 After George W. Bush, Barack Obama becomes the second US president to bet big on India. He may be the first who won’t be disappointed.

Presidents of the United States do not generally change the date of their State of the Unionaddress. This year, US President Barack Obama did so because he will be the chief guest atIndia’s Republic Day celebrations.

This is the first time a US president will be visiting India twice. It is also the first time that Obama will be sitting outside in the open for so long. Not since President George W. Bushsigned a nuclear deal with India has there been so much buzz about the lumbering elephant of the world economy. So, why is Obama placing such importance on India, and what does he expect from a country that was formerly in the Soviet camp and has disappointed so many, despite decades of “liberalization”?

Major bilateral issues are part of the trip’s agenda. The BBC mentions defense, energy and counterterrorism to be the main course for the talks. While that may be true, President Obama’s top concern is deepening economic ties with India. The visit comes at a particularly fortuitous time. Both the US and India are on promising growth curves. It is entirely possible that Obama’s visit could mark the beginning of the most vigorous US-India economic cooperation since the beginning of the liberalization process nearly a quarter century ago.

In 1991, merchandise trade between United States and India amounted to a little over $5 billion. In 2014, it was estimated to be over $66 billion. Similarly, US investment in India has increased dramatically since 1991. However, the last five years have been a sour experience for American investors (and others), as the faltering Congress Party-led government alternated between utter neglect of the economy and deeply damaging policy eruptions.

Fortunately, better times seem to have found both countries. Obama comes to India at a moment when the US economy finally seems to be regaining strength. India is welcoming Obama when most of the other BRICS — Brazil, Russia, India, China and South Africa — have crumbled. Brazil and Russia have no positive economic news to share, and the Chineseare at Davos 2015 asking the world “not to worry” about their economic slowdown.  In contrast, the International Monetary Fund (IMF) recently said that India will grow faster than China by 2016.

US-India relations can use some positive news. After years of economic malaise in India and the mutual blunders of the Devyani Khobragade episode, Obama’s visit can potentially help right US-India economic relations and send a clear signal to American businesses that India can be a serious, stable place to grow.

Fortunately, unlike years past, when US presidents or trade representatives would hound India with a laundry list of tough-to-deliver reforms, this time domestic Indian business interests, US business interests and the Modi government can find plenty of common ground.

Obama’s economic goals should actually be fairly modest. What’s more, most of these goals coincide nicely with the demands of Indian businesses who are otherwise flocking to Singapore and other destinations for a more stable, predictable and open economic regime. When you add Modi’s generally pro-business record and current public statements, one can see very large areas of common interest that will benefit Indian businesses, Indian governance and US business interests. That’s a welcome alignment of stars.

There is wide agreement that the Indian government’s decision to contemptuously disregard a Supreme Court decision and overturn 50 years of settled Indian law to implement retrospective taxation on certain types of major business transactions has derailed Indian economic growth and given the country a notorious reputation in investment circles. Although it was the Congress-led government that decided to overturn a court’s decision and tax past offshore M&A (mergers and acquisitions) transactions, the Modi government has done little substantively to reverse that decision, despite carefully worded promises that it would not undertake any new cases based on retroactive tax laws.

Retroactive legislation is scary for most foreign companies because it means that following the law doesn’t mean much. The law could change tomorrow at a whim and apply to actions committed in the past. What is legal today might be held illegal tomorrow. It is this uncertainty that continues to bedevil investment in India. The call by Indian Prime Minister Narendra Modi to “Make in India” will evoke a tepid response until the law is no longer an ass.

While there are signs that India and the United States will sign a significant agreement to resolve certain other types of tax cases, the Indians must understand there are no half measures for repealing a tax that marked the Indian tax regime as untrustworthy and out-of-step with modern practice. As former Finance Minister P. Chidambaram sheepishly rued to current Finance Minister Arun Jaitley, if Chidambaram had as many seats in parliament as Jaitley’s party enjoys, he would have repealed retroactive taxation.

Watch this issue. Clearly, removing the gun of this tax off the table is the single most important marker of whether India is a safe place to do business.

Obama’s second priority will be to persuade India to change its inflexible and archaic labor laws. There are many US companies that want to “Make in India” because it has the advantage of cheap labor and speedy access to a growing region. Manufacturing in India will also save them time in transporting their products not only to Indian buyers, but also to buyers in other Asian countries. Obama will likely persuade Prime Minister Modi to make haste on reforming archaic labor laws that make it impossible for companies, both international and Indian, to trim their payrolls in lean times. Despite the risk of alienating politically powerful unions, Modi can risk their ire in return for greater growth and more employment that will almost certainly result from a more flexible labor system.

Obama’s third priority will be to seek a reduction to India’s infamous red tape. While some “single-window” clearance systems have been implemented with fanfare, anyone who has to deal with Indian bureaucracy still has to run from pillar to post. Many promising areas of growth have ground to a halt on mistaken bureaucratic action or complete inaction. One example is India’s promising start as a site for low-cost, population-specific clinical testing that has been effectively ended by years of inaction by the regulator. Conducting clinical trials in India right now is virtually impossible and commercially unfeasible, despite promises of clearer regulation. This has devastated India’s highly competitive pharmaceutical industry and prevented growth of a new industry that can help fuel domestic innovation and India-specific health care developments.

More importantly, even a “yes” in India infamously means “maybe” rather than an unequivocal “yes,” and this ruffles American feathers. Modi is attempting to reform this by bringing in ordinances, but a legalistic society like the US is uncomfortable without clear legal charters. President Obama will be pressing Modi to bring in a streamlined approval process for US investments that is anchored by  legislation.

Modi has made very public efforts to make the bureaucracy work better or, simply, to show up for work. A diktat against government officials playing golf, insistence that public servants arrive on time and actually stay in office, an electronic system to track passage of files — these are sometimes comical but warranted steps necessary to prompt actual performance by a bureaucracy lulled into somnolence by decades of political meddling and the moral decay of rampant corruption. Modi will welcome Obama’s requests to increase the ease of doing business, if it is presented in a way that follows his lead on the issue.

One testy issue that doesn’t matter a whole lot is intellectual property (IP). This is a hot-button issue in both countries, but it is almost exclusively focused on pharmaceutical patents. The pharmaceutical lobby in the US is well funded and aggressive, while India often views these issues through leftover leftist lenses. Both countries have a chance to move beyond their domestic lobbies, however.

India has valid concerns about providing up-to-date medicines to its impoverished population at affordable prices, but it also needs to encourage domestic innovators who are being lured abroad by countries such as Singapore. The United States has valid concerns about enforcement of IP rights, but its bargaining position must not be held hostage by the large pharmaceutical companies. The US must recognize that compared to China, India is a virgin when it comes to IP violations. The courts will enforce foreign IP holders’ rights on a timely basis, and there is little “home cooking” when it comes to such decisions. IP holders in China would love to face the comparably minor challenges one meets in India.

There is a rational way forward here, one that allows India to impose rational and just price controls on drugs while allowing a vigorous IP regime that encourages innovation in the country. India requires fresh ideas and economic thinking on this issue rather than framing this as either a leftist defense of the poor or a craven collapse to outside business interests. For its part, the United States should help India find a balance and not let the pharmaceutical lobby dominate the discussion. The best selling point for “Make in India” is that the country will not rip off American intellectual property in the manner of China. A reform in India’s IP regime will go a long way in satisfying Obama and implementing Modi’s vision.

It is hard to believe that US-India relations are at such a promising juncture. It seems like yesterday when the prior Indian government, in a snit following the US arrest and prosecution of an Indian diplomat, was hauling away protective barriers at the US Embassy in New Delhi and dictating which diplomats could continue to buy cheap California wines from the embassy’s commissary.

Prime Minister Modi deserves great credit for looking at India’s greater interests and reaching out to a country that only recently had him on a blacklist and barred from entry. President Obama has a great chance to reciprocate the gesture. Both leaders have a rare opportunity to help each other unlock India’s economic potential.