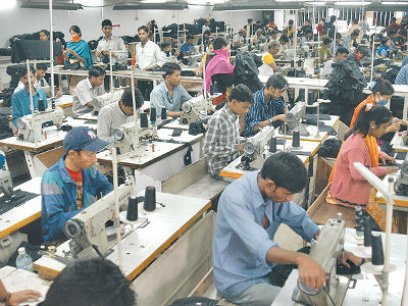 During the eighties, Nepal experienced some optimistic moments in manufacturing sector; Nepalese woolen carpet shops across the streets of Frankfurt and other European cities were subject of major attraction. Nepalese garment export to USA was contending with other major garment exporters of the world. And export of Nepalese products to India including edible oil (Vanaspati ghee), acrylic yarn, copper products, zinc oxide etc. had also given good impetus by that time. During 2000, share of manufacturing sector to GDP was around 10% and industries were supporting satisfactorily to export and import substitutions. But unfortunately, it could not be sustained longtime and manufacturing sector shrunken in a dramatic manner and share to GDP continuously fell, currently to 6%.

Many factors were responsible for this breakdown – export of low quality woolen carpet produced both in Nepal and India branding as standard Nepalese carpet, export of machine made sub-standard Pashmina shawl branding as handmade product of Nepal, cancellation of United States special trade preferences and duty-free tariff benefits to Nepalese products and quota restrictions and non-tariff barriers imposed by India on major Nepalese exportable products were key elements for the crumble of Nepalese manufacturing.

Moreover, Maoist insurgency, political instability, power crisis and labor problems were equally responsible for descending this sector. Thus, numerous Nepali factories were either shut down or slashed output. The tiny and primary industrial base of Nepal could not bear these external as well as internal shocks and the economy became ailing after those intolerable frights.

Likewise, public sector industries were sold without proper evaluation only to acquire valuable lands and properties of the industries by the individuals and failed to run these industries even in the earlier conditions. This happened even though Nepali industries cannot compete with the goods produced in India and China, both of which have economies of large scale.

Investors in manufacture sector do not feel secure to invest as they continue to be stymied by militant trade unions, instability, power shortage, weak infrastructure, strikes, red tape, policy change and lack of long term tax incentives and financial supports. There is negligible protection for both export oriented and import substitution industries in Nepal. Industrial growth from 8.7 percent has come down to 1.8 percent in ten years.

Due to open border and easy accessibility of Indian currency, it has been impossible to control smuggling of Indian goods in Nepal. Moreover, dumping of cheap goods has killed off budding domestic production both from India and China.

Export of Nepalese manufacturing items are highly dependent with Indian market, which accounts more than 60% of Nepal’s total export volume and exporting to countries other than India are not cost effective; they must pass by only transit route through Indian sea port and vice versa while importing raw materials for the industries. Indian market for Nepali product is highly fluctuated; it changes its policy course violating trade transit treaty with Nepal and imposition of different tariff and non-tariff barriers if Nepalese export started to increase in Indian market. Only Indian multinational industries in Nepal can easily export their products to India. Establishing industries is thus a risky venture in Nepal and it cannot compete with the neighboring products.

The manufacturing sector employed just 6.6 percent of the total work force. The competitive performance of Nepal as measured by the Competitive Industrial Performance Index (CIP) is very low (119th out of 135 countries). The cost of export and import in Nepal is very high and excessive costs has been also challenge to develop industries.

This sector is small and is not dynamic, can’t be expected to play a strong role in mitigate economy-wise imbalances. Due to decline nature of productive sector, there is very low opportunity of jobs inside the country. Thus, millions of young people are working abroad as cheap and unskilled laborer.

Even after six decades of planned economy, this sector is still retreated towards basic and primary industries with continuous decline in productivity and production are indication of its ailing nature. Inadequate infrastructures are causing problems to open new industries. Moreover, lack of skilled manpower, lack of modern technology, lack of diversification of export and high labor intensive are some other challenges for the development of this sector.

FDI is open in most of the sectors in Nepal. There is equal treatment to foreign and local investors. Government ensures legal protection to foreign investment against nationalization and expropriation and allows repatriation of proceeds from sales of shares and proﬁt. Signiﬁcant investment incentives exist.

Recently the United States legislation authorized special trade preferences for Nepal by granting duty-free tariff benefits for up to many Nepali items, including certain carpets, headgear, shawls, scarves, and travel goods, is authorized for ten years.

Now with the Agreement on Transit Transport in place, Nepal might not only gain access to Chinese ports, roads and train connections to and from Central Asia and Europe through Chinese territory. It will certainly support for trade diversification and would decrease dependency with India.

The government is in process fast track to update industrial and labor laws, foreign currency regulations and other related laws to support industrial development. To protect domestic industries, Nepal must think seriously in separate way about imposing systematic non-tariff barriers, anti-dumping duties and quantitative restrictions on the import of some products in which it is self-reliant. Lat but not least, the end of load shedding in power sector has also shown some positive indications in manufacturing growth,

*The author was Under secretary under Ministry of Finance Nepal and associated with United Nations Development Program in Africa. He has written a book – The Violent Nile: A Novella on East Africa.