Nepali in America: Expanding Their Footprint 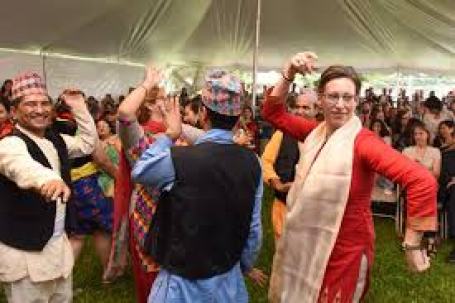 In the 1970s, President Richard Nixon attempted to dash communism by wrecking a Himalayan hippie Shangri-La and a complete ban on marijuana in Nepal.

People of the western mountainous region of Nepal, who were reliant on the cultivation and sale of marijuana for their livelihood, fell into an extreme cycle of poverty and the local economy collapsed as a result of the ban on marijuana.

Rising poverty in remote areas of Nepal gave an opportunity for Maoist to persuade poor people to support them overthrow the government through violent activities to solve their problems. People in those areas favored Maoist thought and became part of their revolution. United States’ strategy to stop smokers and communism became inutile and sparked a Maoist blowback. During the Maoist insurgency, thousands of Nepalese applied for asylum in the US on political persuasion grounds.

The first recorded immigration from Nepal to America was in the 1940s, and only in 1957, Nepalese immigrants were identified by the US as their own special group. Before it, they fell under the broader category of other Asians, and records show that till the year 1996, the number of legal immigrants has stayed below 100 per year. The 1990s US census showed that 431 permanent citizenships were granted to the Nepali community.

In 1978, for the first time, when I traveled to the United States of America, under a government scholarship program with my three colleagues, by that time, it was considered a unique chance for the public in Nepal to visit there.

General Padma Bahadur Khatri was the ambassador of Nepal in the US. During our visit to various states, we also visited the Embassy of Nepal in Washington DC and met with ambassadors and diplomatic officials. The ambassador invited us for dinner in his residence and we were welcomed as an important guest.

Princess Jyoti Rajya Laxmi joined the dinner as chief guest with her husband Mr. Singh Bahadur Basnyat, First Secretary at the embassy, who was a good friend of one of my colleagues, Mr. Madan Raj Thapa. We enjoyed Nepali foods together with the princess, ambassador including family members and embassy officials.

The next day in Washington DC, Mr. Purushottam Shrestha, Second Secretary at Nepal embassy guided us on a city tour and shopping mall. The importance given by the embassy to us was subject of honor. During that time, there were hardly five hundred Nepalis in the United States and it was quite surprising to come across a Nepali there. However, if we analogize then and now, at present, the numbers of Nepalis in the US have exceeded four hundred thousand, as one of the fastest-growing communities.

Each year, over a million Nepalis, apply for an Electronic Diversified Visa (EDV) of the US and around 3000 get a green card under this program. To increase the diversity of immigrants, the US government has selected Nepal as one of the countries eligible for the DV Lottery. The US State Department selects countries that have sent less than 50,000 immigrants to the US in the last 5 years. The Immigration Act of 1990 established the current and permanent Diversity Visa (DV) program.

And as of August 2018, there are approximately 60 Nepalis Deferred Action for Childhood Arrivals (DACA) recipients. DACA is a deferred action policy implemented by the Obama administration in June 2012. It is aimed at protecting qualifying young undocumented immigrants who came to the U.S. as children, temporarily shielding them from deportation and providing them work authorization with possible renewal every two years.

One of the first orders US President Biden signed  “preserve and fortify” DACA protections for undocumented residents brought to the United States as minors. It also proposed comprehensive legislation that would strengthen and improve the immigration system, including expanding the DACA program and making it permanent while also providing a pathway to citizenship for Dreamers. The Trump administration sought unsuccessfully to end DACA, although that effort was thwarted by a series of court decisions culminating in last year’s ruling by the Supreme Court.

America has been a preferred destination for Nepali students as well. Over the last decade, the number of Nepalis in the US has increased steadily especially with the significant flow of Nepali students. Each year between 10000 to 15000 students come to different US universities for higher education. According to the International Education Exchange’s (IIE) Open Doors report, Nepal has consistently ranked among the top 20 countries as a place of origin for international students to the US. Nepalese students are among the highest percentage receiving university education in the US. Their accomplishment in science, technology, and math education seems equivalent or better compared to most countries.

Nepalis are one of the fastest-growing communities in the US. According to the South Asian Resource center and Setopati’s research, 3,15,980 Nepalese are living in the USA. This 2017’s research was based on Census Bureau, Homeland security, State Department, CDC, World Bank, Migration Policy Institute, International Education Exchange, Track immigration, NCCL, and UNHCR’s from 2010 to 2016’s data collection.

Moreover, according to UNHCR’s 2015 report, 84,800 Bhutanese Nepalese are living in the US.

Nepalis in considerable numbers also enter the US illegally paying a hefty amount to brokers. Around a thousand Nepalis, in a year trying to enter the US illegally through the southern border with Mexico. According to media reports, during their traveling, they transit through 13 countries starting mostly from New Delhi, Doha, and Dubai up to US Mexico border. Many of them are being caught in the border by security officials and be held in a detention center prior to trial or deportation.  Currently, 79 Nepalese are in US jails as a result of a violation of immigration laws.

Those who come to the U.S. without travel documents or with forged documents may be deported quickly without an immigration court hearing under an order of expedited removal. Others may go before a judge in a longer deportation (removal) process. Within the last three years, 158 Nepalis have been deported from the USA to Nepal.

Previously Nepalis used to get not as much of a white-collar job compared to other nation’s people. However, in recent years Nepalis in considerable numbers are employed in prestigious professional positions in most of the world renounced technology companies and some have their own IT companies, too. The high educated Nepalis are being employed in professional areas such as lawyers, doctors, engineers, accountants, nurses, and teachers, etc. Less-educated Nepalis get blue-collar jobs such as gas stations, package delivery, grocery stores, drivers for various ride-sharing companies, waiters in restaurants and caregivers, etc.

America is a land of opportunity as well as there are challenges for newcomers and for illegal immigrants. 9% of all Nepalese Americans are below the poverty line which is higher than the average of 15.1% of all Americans and 12.1% of all Asians.

The Nepalis American communities have been settled across all states in the US, representing first and second, two generations. The significant population of Nepalese American exist in major cities like New York, Dallas-Fort Worth, Washington DC, San Francisco, Chicago, Boston, Florida, Denver, etc.

On March 22, 2021, the Embassy of Nepal in Washington DC issued a press release condemning the increase in violence against people of Asian origin, including the horrific shooting in Atlanta in which eight people lost their lives, and an assault against a Nepali Uber driver in San Francisco.

According to US Census figures compiled by a civil rights group, South Asian Americans Leading Together (SAALT), the population of Indian-origin people in the United States grew by 38% in seven years between 2010 and 2017.

The foreign-born share of the U.S. population is at its highest level since 1910, with the approximately 44 million immigrants living in the United States representing 13.5 percent of the projects that net international migration will be the main driver behind U.S. population growth between 2027 and 2038.

Under South Asian immigrants, Indians comprise the largest segment of the South Asian community, making up over 80% of the total population, followed by Pakistanis, Bangladeshis, Nepali, Sri Lankans, and Bhutanese. The Nepali community grew by 206.6% since 2010, followed by Indian (38%), Bhutanese (38%), Pakistani (33%), Bangladeshi (26%), and Sri Lankan populations (15%).

Nepalis in America have been capable to distinguish themselves as a distinct ethnic group. They have deep cultural and religious affiliations. The Nepali community actively participates in a series of religious, social, cultural, and charitable networks, which include the celebration of certain religious and cultural moments – Shivaratri, Udhauli Ubhauli, Losar, Dasain, Tihar, Chhath, and the Nepali New Year. They also take part in and observe American local cultural events and community festivals.

Jackson Heights, in New York City, where Nepali products and restaurants give resemblances to be mini-Nepal. Nepali traditional food restaurants are found in almost all states in the US. Nepalis have been also well steeped up also in businesses in a variety of products.

There are hundreds of specialized and general associations of Nepalis in the US, who supported with considerable amounts of relief materials to earthquake victims of Nepal in 2015.

There are Nepali local television stations, FM radios, a dozen online magazines, a couple of weeklies, and fortnightly publications in the USA.

The United States’ economic strength, societal resilience, and cultural vibrancy have all been enhanced by the interplay between its diverse ethnic and racial groups—both those indigenous to the country and those who have arrived over several centuries.

Studies show that the elimination of barriers to migration would have profound effects on world GDP, with estimates of gains ranging between 67–147%. Studies also show that immigrants have lower crime rates than natives in the United States.

America is a “nation of nations.” Immigrants from all over the world contributed to America become the “most productive, the wealthiest, and the most powerful nation in history.” Immigrants make America great because immigrants made America.  Nepali Americans are also contributing their best to this promised land.