When plans are drawn up to plant forests as a way of storing carbon and mitigating the impacts of climate change, many reforestation projects deploy a range of fast-growing saplings from different species that quickly end up being the same size.

Now however, a team in Nepal suggests that having a mix of both large and small trees can matter even more than species variation for a forest’s ability to lock in carbon.

Researchers from the University of Bergen in Norway and the Kathmandu-based non profit Forest Action Nepal analysed 530 plots across six protected and unprotected forests in Nepal’s mountainous regions, seeking to understand what attributes are the most important when it comes to improving a forest’s capacity to absorb carbon. They looked at biodiversity traits, such as species diversity, as well as structural features like tree size, a metric known as ‘size inequality’.

“We wanted to understand how forests absorb carbon and what drives this process,” said author Lila Nath Sharma, a researcher with Forest Action Nepal. The team calculated carbon sequestration by converting an estimate of the total biomass in the canopy into carbon dioxide equivalent. “We found that forest carbon varies between forests, and in particular that protected forests have higher tree carbon than unprotected forests.” 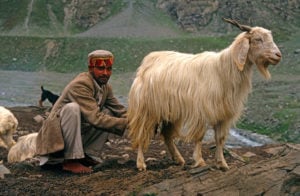 RECOMMENDEDTree planting pushes out pastoralists in the Himalayas

More surprisingly, the researchers also found that structural diversity parameters such as density, tree height and diameter contributed more to carbon sequestration than biodiversity factors, such as species richness. “This can be explained by a phenomenon known as niche complementarity,” Sharma said. “Trees of different sizes utilise different spaces and different resources in the forest.”

Some trees are in the canopy layer, others in the middle, and the smaller ones occupy the lower strata, he explained: “They utilise the available space perfectly, which leads to an increment in tree carbon in the forest.”

According to NASA’s programme on land use change, Nepal’s forests have grown over time, from covering just over 26% of the country’s land area in 1992 to nearly 45% in 2016.

Today, the carbon trapped in just a tiny portion of Nepal’s 6.63 million hectares of tree cover could be worth up to USD 45 million through a new scheme under the World Bank’s Forest Carbon Partnership Facility. The pilot project targets the lowland region of Terai, one of Nepal’s biodiversity hotspots, home to a range of large mammals from tigers to elephants. As part of the programme, says Buddi Sagar Poudel, chief of the Implementation Centre of the UN forest restoration programme (REDD) under the environment ministry, scientists will “measure the carbon stock later this year and in 2024, to work out how much additional carbon has been sequestered.” Based on the results, they will be able to sell the carbon to industrialised countries at a set price.

If this first project is successful, Poudel said, this could pave the way for similar new schemes in carbon rich forests at higher altitudes, such as those studied by the Norwegian and Nepalese team. Information on what approach to forest management can maximise carbon storage will add an important piece to the already rich scientific toolbox of Nepalese forest planners, Poudel added.

The new research points out how size inequality increases forests’ capacity to absorb carbon, but the big trees they harbour have unique carbon trapping qualities of their own. During previous studies, Poudel recalled, “We have carried out forest assessments and we found that the quantity of carbon per hectare is much higher in the mountain than in the lower region because in mountain areas trees are bigger.” Bigger trees, he added, mean bigger carbon stocks.

“Large, individual trees make a disproportionate contribution to the total above-ground carbon storage at the plot level,” said Jagdish Krishnaswamy, a senior fellow with the Bangalore-based research institute Ashoka Trust for Research in Ecology and the Environment (ATREE), who was not involved in the study. “If we try to estimate this at the landscape level, we would probably find that a loss of just up to 10 or 20% of large trees may actually make a big dent in the overall carbon stock [of a forest].”

Sharma explained that his research holds lessons for forest management beyond Nepal. Across the region, compensatory afforestation policies such as India’s CAMPA replace stretches of forests cleared to make space for industrial development with younger, fast growing saplings planted elsewhere.

“In general, the best strategy is to protect what you have, including natural forests and grown [individual] trees,” Sharma said. If an area is degraded new plantations may be the only solution, he added, “but as an ecologist I am always suggesting [that] people promote natural regeneration [strategies].”

According to Krishnaswamy, there are ways to incorporate size variety even when dealing with new plantations. Instead of selecting a clear piece of land, he suggested, planners could enrich a degraded forest, planting around existing trees. “You could identify sites [that have been cleared for plantation] but still may have a few large trees somewhere, and maybe the rest of it can be enriched or restored,” he said.