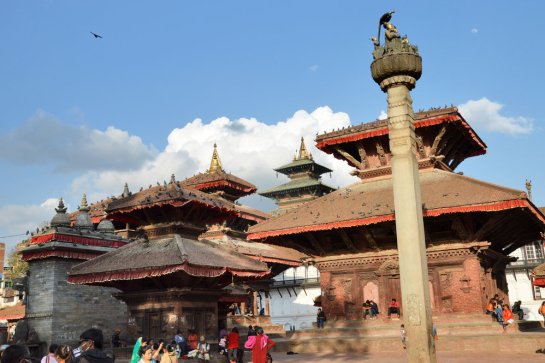 Despite being one of the excellent historic, cultural and religious tourist cities of South Asia, the capital city of Nepal, Kathmandu is suffering from deteriorating air quality, unplanned infrastructure and housing growth, environmental risks, water contamination, lack of enforcement of stricter regulations, growth limitations of drinking water, energy, excess dusty and fleabag roads and uncontrollable transportation. Trash piled up on the streets is a normal phenomenon, and only 5% of wastes are being recycled.

In the past ten years, the number of vehicles on Kathmandu’s streets has risen threefold. The problem has become so acute that many of its two million residents are left wondering: at what point will their city become unlivable?

During surges in Kathmandu traffic congestion, the level of small particulate matter can measure over 500 micrograms per cubic meter, or 20 times the World Health Organisation’s safe upper limit.

Suspended particles including dust, exhaust from vehicles and diesel generators are the main culprits. Vehicles emit poison. Air pollution gets into the human body and causing illness in respiratory system as well as it contaminates soil, which produces vegetables and foods. The smoke and air pollution are being concentrated inside the valley as there is no outlet to move the polluted air due to obstacles of towering mountains surrounding the valley.

Two or four million inhabitants in a metropolitan city are not huge ﬁgure compared to other metropolitan cities of South Asia. However, land scarcity, topography structure, resource constrains, unplanned settlements and no experiences in managing metropolitan cities are hindrances to planned expansion and better management of this town. Kathmandu is failing to retain its beauty, and it would not be exaggerating to say that the modern Metropolitan character has been transforming into a gigantic squalid conurbation.

The great earthquake 2015 ruined the major palaces and buildings of the Kathmandu valley. Several temples on Kathmandu Durbar Square, a UNESCO World Heritage Site, collapsed, as did the Dharahara tower, built in 1832; the breakdown of the latter structure killed at least 180 people. Several temples, including Kasthamandap, Panchtale temple, the top levels of the nine-story Basantapur Durbar, the Dasa Avtar temple and two Dewals located behind the Shiva Parvati temple were demolished by the quake. Some other monuments including the Taleju Bhawani Temple partially collapsed.

The top of the Jaya Bageshwari Temple in Gaushala and some parts of the Pashupatinath Temple, Swyambhunath, Boudhanath Stupa, Ratna Mandir, inside Rani Pokhari, and Durbar High School have been destroyed.

Historian Purushottam Lochan Shrestha stated, “We have lost most of the monuments that had been designated as World Heritage Sites in Kathmandu, Bhaktapur and Lalitpur District, Nepal. They cannot be restored to their original states.”

The damage caused by the earthquake has pushed back Kathmandu, and it would take at least a decade to reconstruct the devastated structures and monuments of Kathmandu.
Resembling other metropolitan cities of the world, the capital, Nepal has also been paradise for the people who have a strong will and are prepared for hard labor. It has made countless wealthy people. It is usual for the general populace to enter here in search of employment and a better life. There are better opportunities in Kathmandu compared to other parts of the country. The centralized system of development of the capital city has forced not only the people of other districts to settle there in search of better future, but also a huge crowd entering from bordering southern neighbor are also seen busy for better earnings. The small scale of the economy of Nepal, especially of the capital city, is not in a condition to bear such over-inﬂux of the populace, which has prompted it to worsen fast.

The general people, as well as politicians, have started to think and have felt the need to change the location of the capital city or build new smart cities around it. The decision to relocate capital town in a new site is certainly not an easy task as it needs billions of expenditure and long duration of time.

Only a few countries have managed to transfer their capital cities, and many have failed after decades of planning and construction efforts. This is a high-risk task. If fails to move the capital city after a certain interval of time, the social, political and economic impacts might be very costly and severe to the nation. There are numerous examples of capital city transfers around the world.

The government of South Korea announced on 11 August 2004 that it has chosen a site of some 7130 hectares in the Yeongi-Gongju region, 150 kilometers south-east of Seoul, as the new capital. The Yeongi-Gongju region, which was selected from among a list of four ﬁnalists, won on transport and environmental grounds. The site is close to existing high speed railway and expressways. The Cheongui airport is also nearby. The government has planned to transfer the capital there by 2020.

The government of Kazakhstan organized an international competition for the master plan and design of the new city of Astana, its new capital. The government declared that the Japanese architect Kisho Kurokawa was awarded the ﬁrst prize. Kazakhstan gained its independence in 1991. The capital of Kazakhstan moved from Almaty to Astana in 1997. The government ofﬁcials cited several problems with keeping the capital in Almaty, such as the city´s risk of seismic activity, insufﬁcient room for expansion, and priority to the international border.

The decision to shift Tanzania´s capital from Dar es Salaam to Dodoma was made more than four decades ago. The government established a Capital Development Authority, which was headquartered in Dodoma. The Parliament building was being constructed there with a view alternating session in Dodona, plots were being allocated to diplomatic missions, and some infrastructure was constructed but the whole concept to transfer the capital city is under a big question mark.

Burma has also a new capital city, called Naypyidaw, or Abode of Kings, being built about 460km (300 miles) north of the old capital, Rangoon. The rutted and overcrowded roads of Burma suddenly give way to smooth eight-lane motorways as you approach the new capital.

South Africa has a different example of three capital cities. Pretoria is its administrative capital, Bloemfontein is its judicial capital, and Cape Town is its legislative capital.

A few years ago, Reddit r/Nepal as part of acquiring public opinion, asked a question regarding relocation of capital city Kathmandu, which could be kind of interesting:

If you could relocate the capital, Nepal, where would you relocate it to?

The best three suggestions were;

a. A new city in Chitwan or Nawalparasi district

There are vast areas of flat lands. Best for big and safe international airport. Perfect for a new planned city.Lots of big rivers for water supply. Almost centrally located. The population is a good mixture of all caste and ethnicities. Not as hot as central Terai and not too cold. (Exceptional cases exists). Major highways are already passing through it which touches almost all the key cities in the country. So good accessibility

b. I’d keep it in Kathmandu. Look at some examples of purpose built capitals in the modern era: Brasilia, or more recently Astana, and Naypyidaw. The first one still doesn’t work as a modern city. The second one is a vanity project of an authoritarian leader. The third one is too far north from the cosmopolitan southern center of Myanmar and consists of empty highways, empty malls, empty airports and is devoid of people. In all three cities, officials and politicians rush back to the messier cosmopolitan cities [Rio, Almaty, Yangon]. Kathmandu is too crowded, and it has too much power. I think federalism will lessen the demographic pressure on the capital. We don’t need a new national capital because we will have seven different state capitals. We can shift some of the major national institutions to the state capitals. For instance, put the Supreme Court in Pokhara or the Aktiyar (anti-corruption) in Birgunj districts.

c. Maybe have two capital cities – one looks after the administrative and legislative side, and the other is the industrial/commercial capital. The two logical answer for me is Kathmandu being the administrative and cultural capital and the industrial and business capital being either of these two –
§ Bharatpur-Narayangarh-Gaidakot conglomeration. Chitwan Valley is flat and broad and has major potential for establishment of the industrial sector. Of course, primary concern is the national park, and that already poses some significant threat in the massive urbanization of this area.
§ Birgunj-Simara-Nijgadh conglomeration. Vast swathes of flat land, perfect for industrial and urban growth.
More than relocating the capital to a new location; nonetheless it has been urgent to well-managed the existing capital Kathmandu. There are so many plans and programs going on and under pipelines to make it livable but instead of being better things are becoming worse.

The construction of second ring road project is moving at snail’s speed, it could be a long-term support, but for the immediate support, it has nothing to do. The existing ring road expansion by the Government of China is a positive endeavor. However, it is consuming a long time to complete.

The only one international airport in Kathmandu is also incapable of coping with the flow of travelers and its further expansion is limited. Around five million passengers yearly travel through this airport and in the lack of other international airports out of Kathmandu, it has also increased traffic flow in the city.

The governments work very scattered and planning and implementing agencies are so many in the city, which is also primary causes of impediments in the integrated execution of the programs in the city. There is no central command in city planning and implementation; a powerful organization with the full authority of all the required sectors is needed to be formed.

The deteriorating and declining metropolitan image of Kathmandu city may also be damaging the Shangri La character of other parts of Nepal. To save Kathmandu valley, to preserve its cultural, religious, historical and natural heritage and to develop it as an international tourist destination instead of economic center, Kathmandu, a capital city, it must be well managed, cleaned and pollution free.