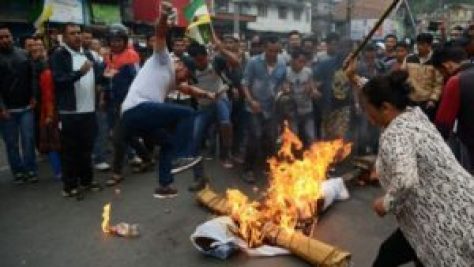 The Gorkha Janmukti Morcha is demanding a separate state in Darjeeling

With the number of private TV channels in India increasing in various languages and most of them controlled and managed by business houses, there is now bitter competition between them to increase viewership and get advertisements.

As a result, views are being publicized as news, and very impolite and vituperative language are being used by the anchors, who seem to think that only such methods and sensation will get them popular amongst the viewers. Most of the anchors have no expertise or domain knowledge in many fields except in dirty politics, and it is sad to see them questioning even people with enormous experience in specialized areas like nuclear programs, hydrocarbon projects, etc.

In the process, many TV channels are doing enormous damage by whipping up passion, providing misleading information and promoting animosity between various sections of the society.

Isolated incidents of rape and individual violence in one corner or the other in a country of 130 crore people are being projected as national and headlines news.  A few students agitating in colleges and universities are being shown as if the entire student community is agitating whereas the fact is more than  90% of the students are not involved in any agitational activities and are only interested in academic pursuits.

The more one would be controversial and capable of expressing extremist views, such persons are invited by the TV media to participate in the programs.

Several information is being exaggerated, and they are mixed with falsehood. For example, on 21st June 2017, one English TV media said that there is anti-Hindi agitation picking up in Karnataka. The fact is that  a few people have made some anti-Hindi observations which do not represent the view of  cross section of people in Karnataka

In the case of Gorkhaland agitation in West Bengal, repeatedly scenes are shown as if the entire Darjeeling and surrounding areas are burning. Similar scenes are also being shown in Kashmir. The sober elements are not invited to express their views, and only the agitators and violence-prone elements are given space.

There are thousands of scholars in India in various fields, and they are conspicuous by absence in Indian TV media.

As the damage now being done by TV media to the fiber and fabric of India is reaching alarming proportions and are becoming disruptive in style and methods, it is essential that Government of India should constitute a censor board for T V media. This is a matter of extreme importance.