Move to restore Kashmir shrine may pave road to peace 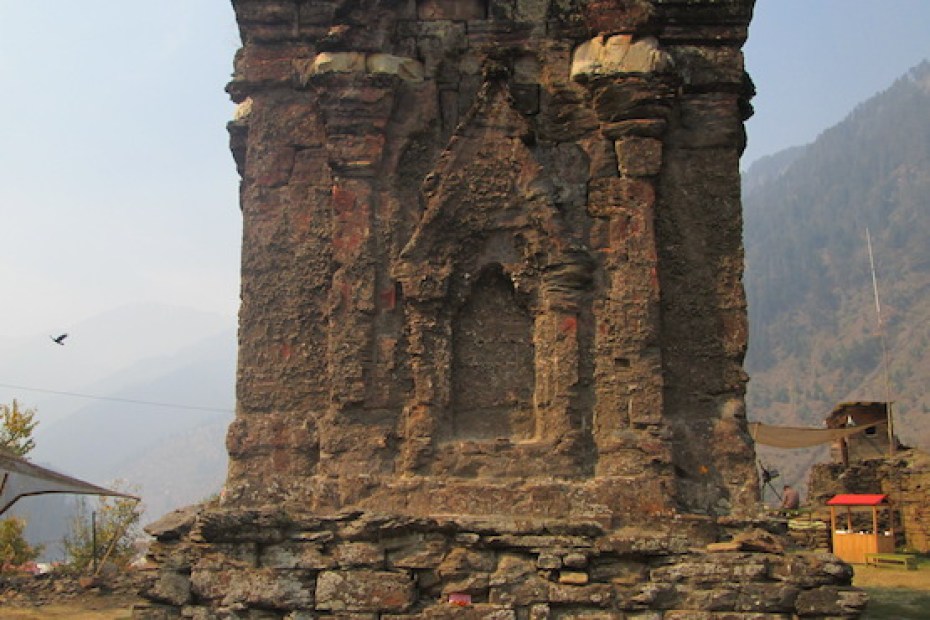 Part of Sharada Peeth, an abandoned temple in Pakistan-administered Kashmir, is visible in this photo sent by local people to Hindus in India who are campaigning to restore it to its former glory as a holy shrine. (Photo provided)

A 2,000-year-old Hindu temple inside Pakistan-administered Kashmir is emerging as a rallying point for India and Pakistan to restart their defunct peace process and bring the region’s estranged Hindus and Muslims together to reclaim their heritage.

The temple, revered by both religions as a holy shrine, stands 25 kilometers from the Line of Control(LOC), a military demarcation that divides the disputed region claimed by both India and Pakistan.

In this turbulent area where religious tensions often run high, the armies of both nations intermittently engage in exchanges of fire.

Since 23 local Hindu families left for India in 1947, the shrine has stood as a forlorn monument, bereft of both its deity and devotees. Nonetheless, local Muslims still hold it in reverence.

It is located in the village of Sharada in Muzaffarabad and is known as Sharada Peeth, the abode of Saraswati, the Hindu goddess of knowledge.

The abandoned stone temple is all that remains of what was once an Indian university, scholars claim, visited as far back as 632AD by the Chinese Buddhist monk Xuanzang.

Now a group of Kashmiris, composed of both Hindus and Muslims, are campaigning in India and Pakistan to restore the shrine and reopen cross-border routes for Indian pilgrims.

Ravinder Pandita, who heads the Save Sharada Committee, told ucanews.com the top court in the Pakistan-controlled part of the region has received his petition and ordered the temple to be restored to at least some of its former glory.

The New Delhi-based technocrat-turned-campaigner is also lobbying local and provincial governments in Delhi, Srinagar, Muzaffarabad and Islamabad on the issue, he said.

“Governments can talk and fight; armies can fire or just keep a watch on one another. For us Kashmiris, the temple lies on Kashmiri land so it is our duty to restore it to its former glory,” Pandita said.

Pandita is one of 300,000 Hindus who fled their homes in northern Kashmir some 27 years ago after Muslim rebels, allegedly backed by Pakistan, unleashed a campaign of terror on them. 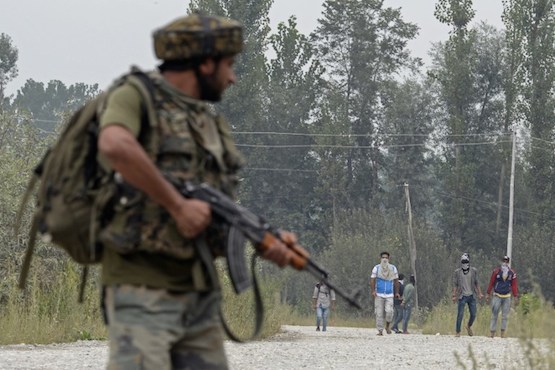 Kashmiri villagers gather as they throw stones towards Indian army soldiers near a gunfight between militants and government forces in Pulwama, south of Srinagar, on Aug. 26, 2017. Tensions run high in Kashmir, which lies at the heart of a territorial dispute between India and Pakistan. (Photo by Tauseef Mustafa/AFP)

The support he gets from villagers in Sharada “has been a great encouragement,” he said.

Greater internet connectivity in the region helps him overcome physical barriers like the military border so he can maintain regular contact with local people, he said while playing video and voice recordings from one Muslim villager.

One video from the village shows a sand bunker with the Pakistani flag flying on the edge of a wall around the temple site.

“This was shot recently, probably as a result of all the tension and shelling around the LOC,” Pandita said.

Despite the area now belonging to Pakistan, an Islamic country, “the people have not lost their sense of history, as most of the local shops and hotels are named after Sharada,” he added.

Mai Sharada, the goddess of knowledge, is shown in carved form seated at the temple while Mai Narada is incarnated in the form of the hillock facing the temple, Bashir, a local resident, explains in one of Pandita’s video messages.

But taped messages aren’t the only things that find their way across the heavily guarded border. Circumventing all of the restrictions on mined goods, some Kashmiri Muslims were able to bring Pandita soil and stones from the area around the temple.

And he has sent flowers to friends there, with smugglers laying them where a sandalwood statue of Saraswati once lay.

Moreover, he sent a poster of the goddess to villagers across the border. They fixed it on a stone wall and sent him a video recording to show him how it looked.

“While they were working on it, a military man who was on duty came over and made enquires. One guy called me to explain what was happening, so I spoke to him and he was very understanding,” Pandita said.

The temple remains in a dilapidated condition: Many of the stones are corroded and the structure has lacked a roof since an earthquake devastated the region in 2008. The sandalwood statue inside disappeared shortly after the partition of India in 1947.

Kashmir was subsequently divided among three countries including China and has since been at the center of a territorial dispute among all three. India controls the lion’s share, or just over 40 percent of the land and 70 percent of the population.

In a sign of thawing ties, India and Pakistan now run a cross-border bus between the capitals of their respective territories in Kashmir — Srinagar for India and Muzaffarabad for the Pakistan-administered side — to facilitate family reunions.

Pandita is not permitted to use the bus because he has no relatives on the other side.

“So far the focus of the people-to-people contact has been the Muslims, as only they have relatives across the border,” he said.

But most Kashmiri people “hold all religions in high esteem despite the insurgency and border tensions,” he added.

He believes promoting “religious tourism” across the border will further help mend ties between the two neighbors.

Others disagree given the strategic importance of the region to both armies.

Sayed Ata Hasnain, a former commander in Kashmir who now ranks as a member of Pandita’s lobbying team, said Pakistan’s army considers the village of Sharada a strategic location and would be loath to see it exposed to streams of Indians, tourists or otherwise.

Pandita points to the bus as a symbol of what can be achieved when people set their differences aside and put their minds together.

“Could we ever have imagined a bus would run between Srinagar and Muzaffarabad?” he mused.