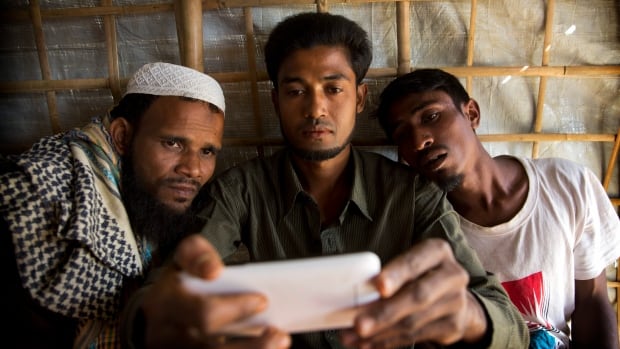 The faces of the men half-buried in the mass graves had been burned away by acid or blasted by bullets. Noor Kadir could only recognize his friends by the colours of their shorts.

Kadir and 14 others, all Rohingya Muslims, had been choosing players for the soccer-like game of chinlone when the gunfire began. By the time the soldiers stopped shooting at the Myanmar village of Gu Dar Pyin, only Kadir and two teammates were still alive.

Days later, Kadir found six of his friends lying among the bodies in two graves. 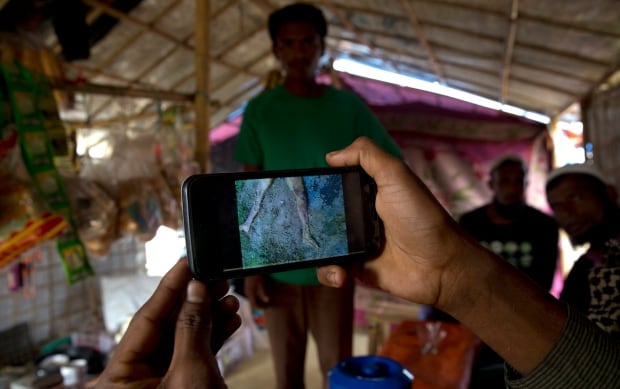 They are among more than five mass graves, all previously unreported, that have been confirmed by The Associated Press through multiple interviews with more than two dozen survivors in Bangladesh refugee camps and through time-stamped cellphone videos.

The Myanmar government regularly claims massacres like Gu Dar Pyin never happened, and has acknowledged only one mass grave containing 10 “terrorists” in the village of Inn Din. The AP’s findings, however, suggest not only the military’s slaughter of civilians but the presence of many more graves with many more people.

‘There were so many bodies in so many different places. They couldn’t hide all the death.’– Mohammad Lalmia, farmer

The graves are the newest piece of evidence for what looks increasingly like a genocide in Myanmar’s western Rakhine state against the Rohingya, a long-persecuted ethnic Muslim minority in the predominantly Buddhist country. The UN special envoy on human rights in Myanmar, Yanghee Lee, said Thursday that the military’s operations against the Rohingya bear “the hallmarks of a genocide.”

Phil Robertson, deputy Asia director for Human Rights Watch, said in a statement that the AP report “raises the stakes for the international community to demand accountability from Myanmar.”

Repeated calls Wednesday and Thursday to Myanmar’s military communications office were unanswered. Htun Naing, a local security police officer in Buthidaung township, where the village is located, said he “hasn’t heard of such mass graves.”

Myanmar has cut off access to Gu Dar Pyin, so it’s unclear just how many people died, but satellite images obtained by AP from DigitalGlobe show a village destroyed. Community leaders have compiled a list of 75 dead so far, and villagers estimate the toll could be as high as 400, based on testimony from relatives and the bodies they’ve seen in the graves and strewn about the area.

Almost every villager interviewed by AP saw three large mass graves at Gu Dar Pyin’s northern entrance, near the main road, where witnesses say soldiers herded and killed most of the Rohingya. A handful of witnesses confirmed two other big graves near a hillside cemetery, and smaller graves scattered around the village. 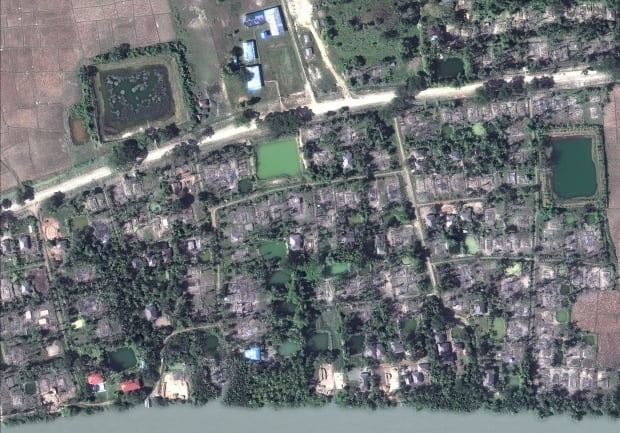 A satellite image shows the village of Gu Dar Pyin, Myanmar, on Dec. 20 after it was destroyed. (DigitalGlobe via Associated Press)

In the videos obtained by AP, dating to 13 days after the killing began, blue-green puddles of acid sludge surround corpses without heads and torsos that jut out from the earth, skeletal hands seeming to claw at the ground.

Survivors said soldiers planned the Aug. 27 attack, and tried to hide what they had done. They came to the slaughter armed not only with rifles, knives, rocket launchers and grenades, but also with shovels to dig pits and acid to burn away faces and hands so that the bodies could not be recognized.

After more than 200 soldiers swept into Gu Dar Pyin around noon, Mohammad Sha, 37, a shop owner and farmer, hid in a grove of coconut trees near a river with more than 100 others. They watched as the military searched Muslim homes and dozens of Buddhist neighbours, their faces partly covered with scarves, loaded the possessions they found into about 10 pushcarts. Then the soldiers burned down the homes, shooting anyone who couldn’t flee, Sha said.

Mohammad Younus, 25, was crawling on his hands and knees after being shot twice when his brother carried him to some underbrush, where Younus lay for seven hours. At one point, he saw three trucks stop and begin loading dead bodies before heading off toward the cemetery.

Buddhist villagers then moved through Gu Dar Pyin in a sort of mopping-up operation, using knives to cut the throats of the injured, survivors said, and pitching the young and the elderly into fires.

Thousands of people from the area hid deep in the jungle, stranded without food except for the leaves and trees they tried to eat. From about 15 kilometres away another group of villagers watched from a mountain as Gu Dar Pyin burned, the flames and smoke snaking up into the sky.

Search for loved ones

In the days and weeks after the attack, villagers braved the soldiers to try to find whatever was left of their loved ones. Dozens of bodies littered the paths and compounds of the wrecked homes; they filled latrine pits. The survivors soon learned that taller, darker green patches of rice shoots in the paddies marked the spots where the dead had fallen.

Bloated bodies began to rise to the surface of the rain-saturated graves.

“There were so many bodies in so many different places,” said Mohammad Lalmia, 20, a farmer whose family owned a pond that became the largest of the mass graves. “They couldn’t hide all the death.”

Eleven days after the attack, Lalmia was fleeing soldiers patrolling near the mosque when he discovered a human hand sticking out of a cleared patch of earth. Lalmia counted about 10 bodies on the grave’s surface and estimated it held at least another 10.

Lalmia and other villagers also saw another large grave in the area, and smaller graves containing as many as 10 bodies scattered about the village. 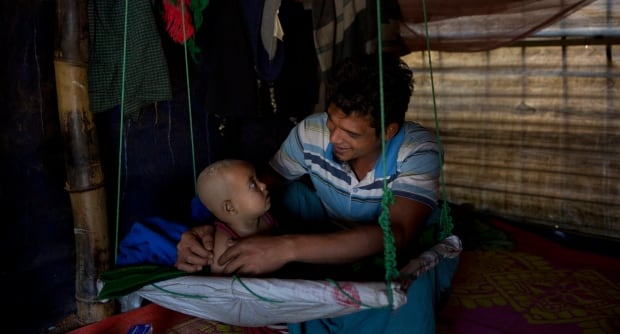 On Sept. 9, villager Mohammad Karim, 26, captured three videos of mass graves time-stamped between 10:12 a.m. and 10:14 a.m., when soldiers chased him away, he said. In the Bangladesh refugee camps, nearly two dozen other Rohingya from Gu Dar Pyin confirmed that the videos showed mass graves in the north of the village.

About 15 days after the massacre, Rohima Khatu, 45, searched for her husband in the graves at Gu Dar Pyin’s northern entrance, trying to identify him by his clothes.

“There were dead bodies everywhere, bones and body parts, all decomposing, so I couldn’t tell which one was my husband,” Khatu said. “I was weeping while I was there. I was crying loudly, ‘Where did you go? Where did you go?”‘

“I have lost everything.”