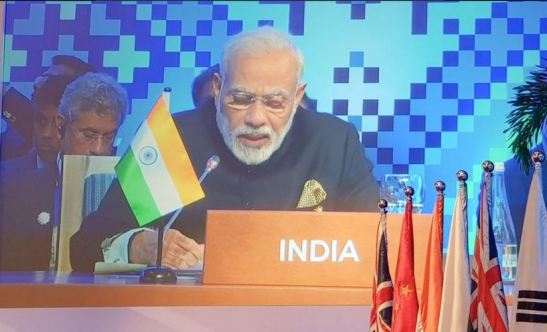 Michael Kugelman | Sunday 21 January 2018
On Jan. 25, 10 Southeast Asian leaders will descend on New Delhi for this year’s India-ASEAN summit. For Indian Prime Minister Narendra Modi, there’s much at stake. He won’t just be serving as host for this high-level event — he will also be seizing an opportunity to showcase and strengthen a key foreign policy initiative: “Act East”.
This is an effort to intensify India’s engagement with its eastern neighbors, and an intentionally more decisive-sounding alternative than the “Look East” policy embraced by previous Indian governments.India’s interactions with its eastern neighbors (other than China) are often overlooked thanks to more highly publicized aspects of India’s foreign diplomacy—such as tensions with Pakistan, growing ties with Israel, a consistently warm rapport with Russia, and rapidly deepening relations with America.
And yet Act East is a key means of pursuing core Indian foreign policy goals — from securing new markets and energy resources to pushing back against China’s rising influence. At the India-ASEAN summit, New Delhi will be looking to address these goals with the interlocutors best positioned to help achieve them.
Modi formally announced the Act East policy in a speech at the annual ASEAN summit in 2014. “We are both keen to enhance our cooperation in advancing balance, peace and stability in the region,” he said, referring to India and the ASEAN nations.
India’s eastward push makes good strategic sense. A nation with great power aspirations needs to develop influence not just in far-flung lands, but also closer to home — and particularly when this broader backyard, the Asia region on the whole, boasts two-thirds of the world’s population and a large portion of its wealth. Moreover, India’s neighborhood to the east is friendlier than the one to the west. To the west, India confronts not just Pakistan but also smaller, poorer countries that often regard their more powerful neighbor with suspicion. To the east, India finds friends like Australia and Japan as well as the ASEAN countries, many of which share New Delhi’s concerns about China’s deepening footprint.
Act East can bring major economic benefits to India. According to McKinsey, the ASEAN countries collectively comprise the world’s seventh-largest economy and host more than 200 of the world’s largest companies. One of the countries represented at the summit, Vietnam, recently set a national record for incoming foreign direct investment (FDI), while another, Singapore, is already a top source of FDI to India. Additionally, New Delhi is one of the negotiating partners hoping to form a mammoth new Asian trade bloc, the Regional Comprehensive Economic Partnership (RCEP). If RCEP, which would include all 10 ASEAN nations, enters into force, it would comprise almost 30 percent of global GDP — and facilitate Indian access to key supply chains in Southeast Asia.

India’s premier will hope to use high-level ASEAN summit in New Delhi to support his foreign policy initiative, which aims to secure new markets and energy resources to push back against China’s rising influence.

ASEAN can also help address two of India’s top energy needs: Natural gas and coal. This is no small matter for a nation that must triple its energy supplies in the coming years to return to double-digit growth. India, which hopes to eventually transition into a gas-powered economy, has already explored deals with Australia, a top global gas producer. And it is looking to deepen ties with Indonesia, from which New Delhi already acquires 60 percent of its coal imports.

Some critics have dismissed Act East as a policy with a catchy title but not much in the way of concrete achievements. Indeed, until recently, New Delhi may have had reason to hold back on pursuing the Act East policy so as not to alienate Beijing — a strategic rival that India has preferred to keep onside, thanks in great part to a robust bilateral trade relationship regarded as too valuable to be squandered.
Today, however, the calculus has changed. China-India tensions have sharpened as Beijing extends its tentacles across South Asia. This push into India’s backyard is headlined by $62 billion in infrastructure investments across Pakistan — including in areas of Pakistan-administered Kashmir that India regards as its own. A tense India-China border standoff in the Himalayas last summer highlighted the increasing strain in the relationship. New Delhi no longer has an incentive to hold back from strengthening existing partnerships and cultivating new ones to its east, where China’s influence has long held sway.
So, in New Delhi on Jan. 25, look for the Indian government’s public statements that wax eloquent about regional cooperation and underscore collective shared interests in security, prosperity and innovation. But, behind the scenes, expect individual charm offensives. Indian officials — including Modi himself — are likely to impress upon each of their 10 guests the importance with which they view his or her country and their determination to forge greater cooperation.
How fitting, then, that on the day after the summit, all 10 ASEAN leaders will serve as chief guests at India’s Republic Day parade. New Delhi reserves this prestigious honor for only its closest friends; over the previous four years, the chief guests have hailed from the UAE, France, the United States, and Japan.
What better way to convey to ASEAN leaders the immense importance that India accords to their region, and to the Act East policy meant to hasten deeper ties to it?
Michael Kugelman is deputy director of the Asia Program and senior associate for South Asia at the Woodrow Wilson International Center for Scholars. Twitter: @michaelkugelman
The article appeared in teh Arab News on 21/1/2018