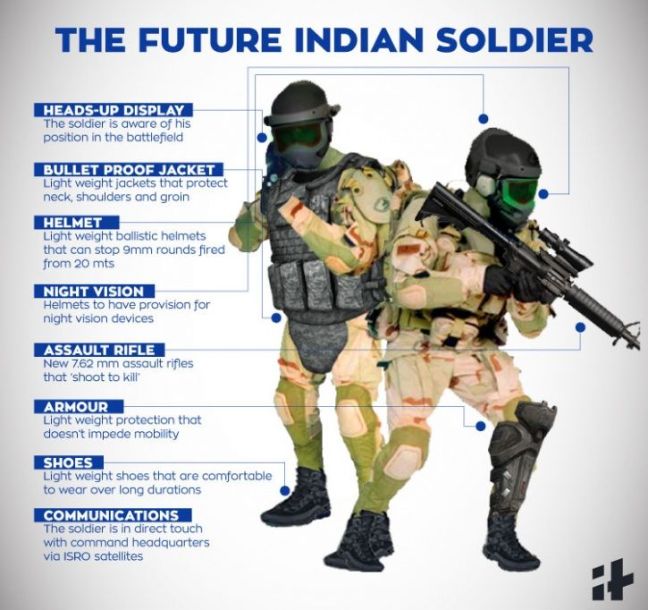 The Modi government has introduced broad reforms under its “Make in India” initiative in order to revolutionize the domain and pace of military modernization by liberalizing Indian defense industry in shape of increasing foreign direct investment (FDI) limit upto 49% from 26%. India is aiming to develop military projection capabilities. Shankar Joshi in his book Indian Power Projection: Ambition, Arms, and Influence, 2015 noted that “economic and military growth, broadening interests, the rise of China and the military’s willing adoption of new roles – have been among the primary drivers of Indian interest and investment in power-projection capabilities.”

Indian ministry of defense plays a watchdog role as regulatory body on behalf of government of India in materializing this process of military modernization. This modernization agenda has resulted in broad based transformations in defense infrastructure, increased military build-up, spiked defense spending and budgetary allocations, weapon procurement policy reforms and source diversification, troops reorganization and doctrinal changes in military outlay of India. India has been ranked as fourth greatest military power after USA, Russia and China as per global fire power index review 2017.  Assessment of current military capabilities and firepower capacity is essential for estimation of military strength of any state. This scenario demands detailed examination of trends in military modernization of India in order to explain underlying rational of this process.

Thus, military modernization becomes basis of balancing and counter balancing process of states in international system which is an endless phenomenon. The other states similarly pursue military modernization as their counter effort in order to balance the military power of the earlier state. The outcome of military modernization is arms race which absorbs exchequer money in defense expenditures at the coast of development of State. However, political conception of friend and adversary state acts as main determinant to influence this process which is evolutionary in its nature and non-permanent in its scope.

India seeks to develop offensive doctrinal and operational network centric warfare capabilities of its armed forces through modernization across six key domains. These dimensions include army, air force, navy, cyber space, nuclear/missile and outer space. The military modernization is carried out at two levels which include thematic/doctrinal and operational/military firepower capability development of armed forces. The primary objective is to mitigate threats emerging from “two and half front” while protect India’s material national interests and project its image globally as superpower. The Modi administration has reinvigorated the pace of this military modernization.

Two and half front threat matrix includes external threats from Pakistan and China with internal threats originating from secessionist movements to the security of India. Rajat Ganguly argued that “the process of transforming the Indian military into a fighting force commensurate with India’s stated ambition to be a superpower. However, the Indian military’s further modernization, expansion and transformation into a modern, technologically savvy and effective fighting force fit for an aspiring superpower are inevitable”. It is evident that there is a broad consensus in political elite of India for executing military modernization in order to materialize its dream of super power but the realist rationale sees irritants in the fulfillment of this dream.

The thematic/doctrinal development of Indian military modernization paradigm has evolved in historic phases. This domain includes Land army, Air force, Navy, Nuclear, Outer space and Cyber space modernization trends. The operational military modernization network has three main characterizes. Firstly, it seeks to develop human capital by developing trained professional manpower which is an essential for war fighting army. Secondly, it seeks to develop, innovate and modernize technology centric hardware for a sophisticated army to advance its military capabilities. It entails both quantitative increase and qualitative improvement in the defense arsenal of the military.  Thirdly, it focuses on logistics, infrastructure and means of utilization to use manpower and technologically advanced arsenal.

It entails mechanized infantry vehicles, nuclear warhead carriers, fighter aircrafts, naval ships, frigates and submarines, Space ships and cyber security equipment. The operational military modernization network of India works under the auspices of Indian ministry of defence (MoD). Indian MoD carries out these three tasks of developing manpower, defense infrastructure and acquisition of defense equipment. Recent nuclear armament deals with USA under the auspices of 2+2 dialogue and signing of S-400 missile defense system from Russia are its manifestation. India has placed order for the procurement of multirole fighter aircrafts from Rafael developers of France.  Induction of Naval warship fleets Arihant, Vikram and Vikramdata in naval forces is reflection of ambitious India. INS Vikramdata is formally commissioned in Indian navy in 2014 while Arahant and Vikram are expected to join Indian naval fleet in 2018 and 2025.

India has already procured ballistic missile defense system from Israel for attaining most ambitious nuclear missile defense shield around its mega cities as bid of developing second strike capability in case of nuclear war after completion of its nuclear triad. Revision of Indian nuclear deterrence strategy in military doctrine 2017 from CMD credible minimum deterrence to CM credible deterrence and revisited commitment to has offset strategic stability and balance of terror in South Asia. India is aspirant to develop cyber security force of 5,00,00 trained and skilled professional under 2013 national cyber security (NCS) policy. India has launched commercial space satellite in 2017 and offered south Asian states its services for commercial and entertainment purposes as part of India’s space diplomacy. Joining of Afghanistan on this service is clear signal of growing regional influence of India. India has used its cyber force to control communication network in IOK and tried to crush freedom movement through use of force which backfired.

Incorporation of (FINAS) Future infantry Soldier as a System as corner stone of building technology savvy smart army has revolutionized style and technique of Indian army’s troop and terrain warfare strategy. The FINAS army equipped with smart arms, light dress, technologically advanced equipment and information superiority over enemy enables army to execute surprise attack with shock factor to gain advantage over enemy in troop warfare in difficult terrain. India is trying to operational this strategy against Pakistan in difficult terrain and altitude warfare on LoC in Kashmir valley.

India has claimed about surgical strikes in September 2016 and September 2018 as saber rattling and muscle flexing exercise to coerce Pakistan. Pakistan has responded to this situation with effective strategic communication by exposing false Indian claims. India has increased skirmishes on LoC against Pakistan since 2014 with increase in every next year and reached to more than 1700 ceasefire violations in 2018. India is using sub-conventional means to destabilize Pakistan. Arrest of Kalbushan Yadev, a serving Indian navy commander from soil of Pakistan is its evidence.

In 2017, India made an aggressive attempt by capturing Chinese road route in old disputed territory what India called Dokhlan. This resulted in military standoff between India and China called it Dokhlan crisis. Later, India and China resolved this crisis amicably due to economic interdependence and ideological animosity like Pakistan and India. Despite the fact that India and China compete in strategic realm they have open ended conflict resolution mechanism. Pakistan and India needs to move toward developing amicable conflict resolution mechanism due to mutual security interdependence.

The transformation in strategic outlay through military modernization has created realization in political elite and security establishment of the polity that India can exercise power projection potential against Pakistan and China to strength its regional security grip which is exaggerated and inflated because of its quest for hegemonic regional great power status. This Indian drive has resulted in counter balancing exercise between Pakistan and China with inclusion of CPEC to expand cooperation from geo-strategy to geo-economic.

Resetting of Pakistan-Russia relations and developing consensus among Pakistan, China, Iran and Russia and Afghanistan are strategic responses to changing strategic environment of South Asia. Increased military spending, armament and extensive military cooperation between and among states of this region is result of Indian hegemonic tendencies. Strategic miscalculation and escalation of Indo-Pak military conflict into full fledge nuclear war can be its fallout. Therefore, effective and continuous communication on the pattern of hot line link and flag ship meetings must be carried out with consistency to mitigate any emerging conflict scenario between Pakistan and India. Otherwise, ultra-ambitious India can put regional and global peace in jeopardy. Security stewardship is only left option to Pakistan and India in current circumstances.