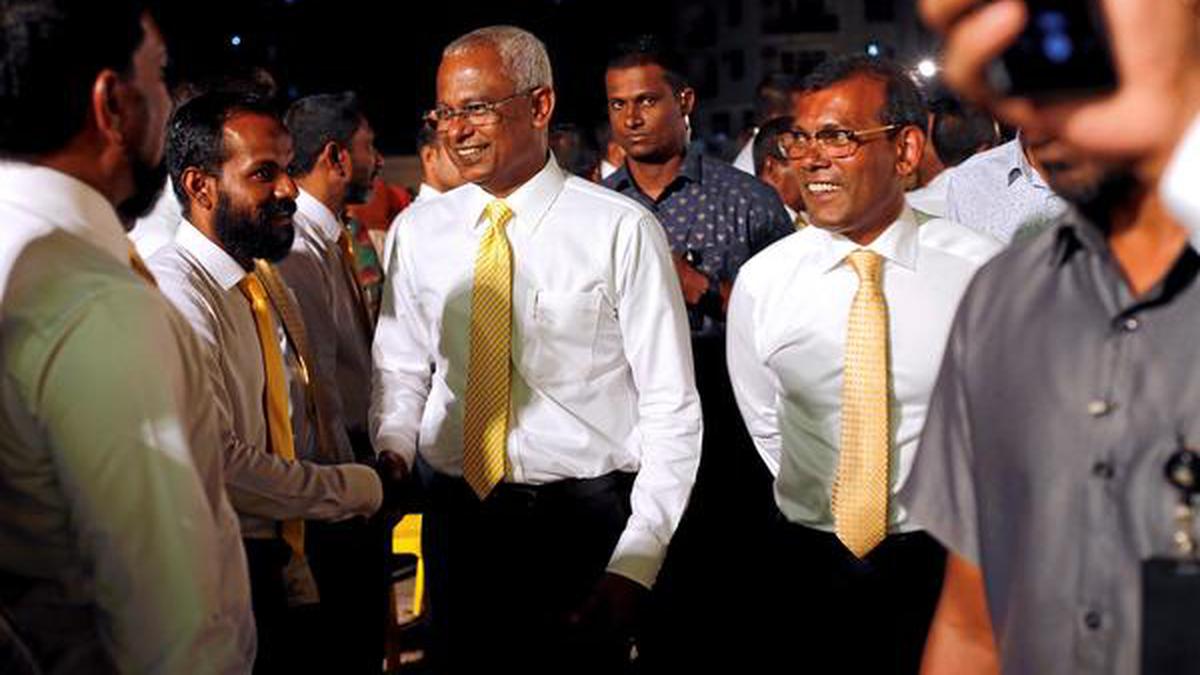 Jailed former President Abdulla Yameen’s Opposition PPM-PNC coalition has called for nation-wide protests outside Covid-hit capital region of Greater Male, charging incumbent Ibrahim Solih’s Government with ‘selling off national assets’ for development loans from neighbouring countries (read: India?), and demanding the incumbent’s resignation. The call comes after their less-publicised July protests, demanding freedom for Yameen, whose appeal against a five-year jail term and $ 5 m in fine in a money-laundering case, is pending before the High Court.

The police have since appealed to the public not to participate in the protests, saying Covid time was not the ‘appropriate time’, when their men too were out-stretched. In February 2012, unaccustomed yet continual 24X7 duty for weeks together had contributed to some policemen joining Yameen-led Opposition protests for the exit of then President Mohammed Nasheed, at present Parliament Speaker and head of incumbent Solih’s Maldivian Democratic Party (MDP).

The current protest-call comes in the light of the historic bilateral agreement for $ 500-m Indian assistance – in turn a part of the $ 1.4-b aid package. Without naming India, Opposition protest-callers have accused the Solih administration of ‘selling off national assets’ to neighbouring nations. Last month, the slogan was about the Government allowing foreign powers to take over and run Maldives.

It was obviously a reference to the continued stationing of Indian military personnel for flying and servicing the Navy/Coast Guard helicopters gifted by New Delhi. The Yameen administration had wanted them taken back. But then and now, the Opposition claims that China did not push the nation into a ‘debt-trap’, (as alleged by Speaker Nasheed in particular).

There is a ring of familiarity to the Opposition’s anti-India stance They had talked about ‘selling off national assets’, when the Nasheed Government (2008-12) gave the Male airport construction-cum-concession contract offered to Indian infra major, GMR Group. At the time, the Opposition wanted GMR and then President Nasheed to go – and achieved as much, the latter after Yameen became President in 2013. All the same, there is concern in some MDP circles that Nasheed was over-doing his India campaign, and this could hurt the party and also bilateral ties, as in the past.

Close to two years in office, the Solih Government seems to be inevitably losing some of the early sheen, as the pressures of political administration, especially under global Covid conditions, is giving way to complaints of corruption. Apart from then Tourism Minister Ali Waheed, who was sacked on gender issues last month, Health Minister Abdulla Ameen is under separate investigations by the police and the Public Accounts Committee of Parliament after the constitutionally-mandated Anti-Corruption Commission (ACC) found irregularities in the procurement of ventilators for Covid care.

This has not gone down well with party cadres and public alike. Thankfully, however, the Auditor-General has certified that the other nodal agency in the Foreign Ministry’s Covid spending was ’in line with policies’. Through the past months, the President has also sacked a couple of junior ministers and other officials appointed by his administration, on different charges, raising questions about their choice in the first place. An early balance needs to be struck as constant ‘interference’ by Parliament, police and other constitutional authorities can put the civil service to slow down on performance, if only to avoid controversies. The ruling party would then have to pay the price for ‘non-performance’.

The President has since appointed Dr Abdulla Mausoom as the new Tourism Minister in the place of the sacked Waheed. Both belong to billionaire-businessman Gasim Ibrahim’s Jumhooree Party (JP), which supported the Solih ticket but was unceremoniously dropped by Nasheed as MDP boss in the parliamentary polls, only months later. Though MDP hot-heads wanted to take back the Tourism Ministry, the nation’s cash-cow, Solih seemed to have decided on avoiding a show-down, as in future elections, the party may still need as many allies as in 2018.

This is so despite the MDP’s two-thirds majority in Parliament, and a lot of chest-thumbing over it. The fact remains that despite the brutal parliamentary strength, last year’s polls showed that in the absence of a cohesive coalition as for Solih only months earlier, the MDP combine’s vote-share slipped from 58 percent to 46 – less than the half-way mark. This is also attributed as the reason for the MDP wanting to extend the three-year term of the local governments to five lest they should face a tricky situation in scheduled polls next year.

Even without it all, strains are seemingly beginning to show within the monolith MDP, though no one is talking about it as yet. Facts speak for themselves. Finance Minister Ibrahim Ameer has complained that owing to media reports about alleged corruption in his ministry, international funding agencies and others were going slow on Covid aid and the rest.

Reports said that a group of MDP parliamentarians have begun a signature campaign for a no-trust motion against Economic Development Minister Fayyaz Ismail, who is also from the MDP. Speaker Nasheed has not denied  that his name is on the top of the list of signatories. Fayaaz has declined comments while the Maldives Trade Union has openly backed him.

However, Nasheed’s involvement, despite his being the party boss, also raises doubts about the party-government equations. In this background, Nasheed, through separate statements, has also affirmed his support for the Solih Government and asserted that Foreign Minister Abdulla Shahid too had his full backing.

More puzzling is an earlier statement by MDP parliamentarian, Rozaina Adam, once identified with the Nasheed camp, declaring her support for President Solih, saying that the ‘nation cannot be ruled by two Presidents’. It’s seen as a powerful statement, targeting Nasheed. Separately, Youth and Sports Minister Ahmed Mahloof has charged MDP parliamentary group leader Ali Azim and others with trying to ‘destroy’ the Solih Government – again together sending out a strong message that not all is well with the MDP top-rung.

On the 12th anniversary of the ratification of the current ‘Democracy Constitution’, Speaker Nasheed sort of opened the Pandora’s Box with a caveat that the present Constitution was Maumoon-centric and was ‘difficult to implement owing to the presidential system’ — but he should not be misunderstood as wanting for a change. Reminiscing on the ratification, then President Gayoom, now in semi-retirement, said that it ‘was one of the proudest moments’.

Incidentally, Abdulla Jabir, leader of the Dhivehi Rayyathunge Party (DRP), the first of the three political parties founded by Gayoom in the past 10 years, has moved a Bill in Parliament now, for adopting the parliamentary system. While Gayoom tweeted support for the continuance of the presidential system, Speaker Nasheed responded by charging the former with ‘rigging the elections’ when in power – one more of the MDP’s favourite whipping boys that have lost relevance for the present-day voter, who wants jobs and Covid-care, instead.

Contemporary Maldives is proving the democratic dictum right – you need a strong Opposition to keep the ruling party united, and a weak Opposition can lead to fissures within the ruling party. The MDP’s tendency to talk about the past, hoping to blame the predecessor(s), going as far back as Gayoom, for all the current ills of the nation,  did not go down well for the Nasheed presidency – nor will it do so now. For the MDP, ‘transitional justice’ may be an attractive western term, an ‘article of faith’ but that is not an end in itself, then or now.

With presidential polls still three years away, moves however are on in various camps to group and re-group, and also promote or pass by future candidates. The pro-Islam, anti-India, religious NGOs’ protest for the ‘December 23 Movement’ provided a meeting-point for the divided Opposition in 2011-12. Today, someone is stirring the pot towards past consistency. Rarely has the same issue won or lost democratic elections, anywhere, leave alone the 21st century Maldives, but neither Maldives, nor MDP too can afford to live in the past – 2018, that is.