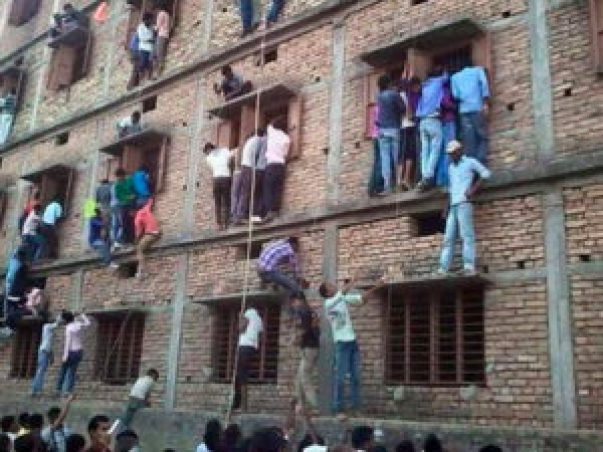 One out of every six examinees abandoned the Class 10 and Class 12 board examinations in the U.P. province of India.

This was due to the fact that the government of U.P. after a long time took strong steps to curb the menace of cheating and copying in the exams. Approximately 1.48 Million of the total 6.36 Million students enrolled for the exams dropped out.

The Chief Minister of U.P, Adityanath warned District Magistrates and District Inspectors of schools that they would be held responsible if unfair means were used at exam centres in their jurisdictions. Numerous CCTV cameras were installed at 8,549 exam centres across the state.

The Allahabad headquartered Board of High School and Intermediate Education Uttar Pradesh, which conducts Class 10 (high school) and Class 12 (intermediate) exams in the province, is among the world’s largest in terms of the number of students.

The quality of teaching in these schools is very poor. Majority of teachers do not even bother to turn up to conduct classes. They mainly focus on earning a large amount of tax-free money through conducting private coaching sessions for students. An entire ecosystem of corruption prevails for arranging mass copying in the board exams.

During 1992, the BJP government in the U.P. province issued an anti-copying ordinance, which made cheating in the Board exams a cognizable offence. A large number of students were detained for cheating and copying in the exams. This resulted in the pass percentage crashing to 14.7% for Class 10 and 30.4% for Class 12, the lowest between 1992 and now.

These steps received praise from the educated sections of the society but made the BJP government highly unpopular. During election campaigning for the 1993 provincial assembly elections, Mulayam Singh Yadav promised to repeal the ordinance, if voted to power.

His party won the elections largely on this plank and immediately after forming the government in U.P., Mulayam Singh Yadav scrapped the anti-copying ordinance.

During March 2015, another Indian province of Bihar received worldwide notoriety. Images of thousands of parents and relatives trying to help their children cheat by scaling the walls of exam centres went viral globally.

They passed cheating material inside through windows to help their kith and kin cheat in the exams. These pictures brought the rot in the Indian examination system out in the open for the whole world to see.

Policemen posted at the exam centres accepted bribes to look the other way. At some schools, numerous parents even clashed with the Police, when they were stopped from assisting their children in cheating.

The then Bihar Education Minister said; “ What can the government do to stop cheating, if parents and relatives are not ready to co-operate, should the government give orders to shoot them?”

The topper of Bihar Board Class 12 exams in 2017 turned out to be a 42-year-old man. This father of two children concealed his real age by falsifying documents.

Bihar School Examination Board passed a directive according to which students appearing for Class 10 board exams in Bihar this year were not allowed to wear shoes and socks to examination halls in order to prevent cheating in the exams.

Approximately 1.7 million students appeared for these exams at 1426 centres maybe, next year, Bihar board will order the students to appear naked, (without any clothes) to stop them from cheating during the exams.

The majority of provincial governments in India make no organized efforts to stop copying in exams for fear of becoming unpopular and losing power in the next elections.

This mass cheating in board exams artificially inflates the pass percentage hence, the government gets a false notion of everything being fine in the education sphere.

The youngsters passing exams through unfair means lack real meaningful education as well as knowledge. They always seek criminal ‘short- cuts’ and become big burden on their parents and the nation.

These youngsters are therefore turning India’s so-called ‘demographic dividend’ into a huge liability.