Major Christian Charity Is Closing India Operations Amid a Crackdown

By ELLEN BARRY and SUHASINI RAJMARCH 7, 2017 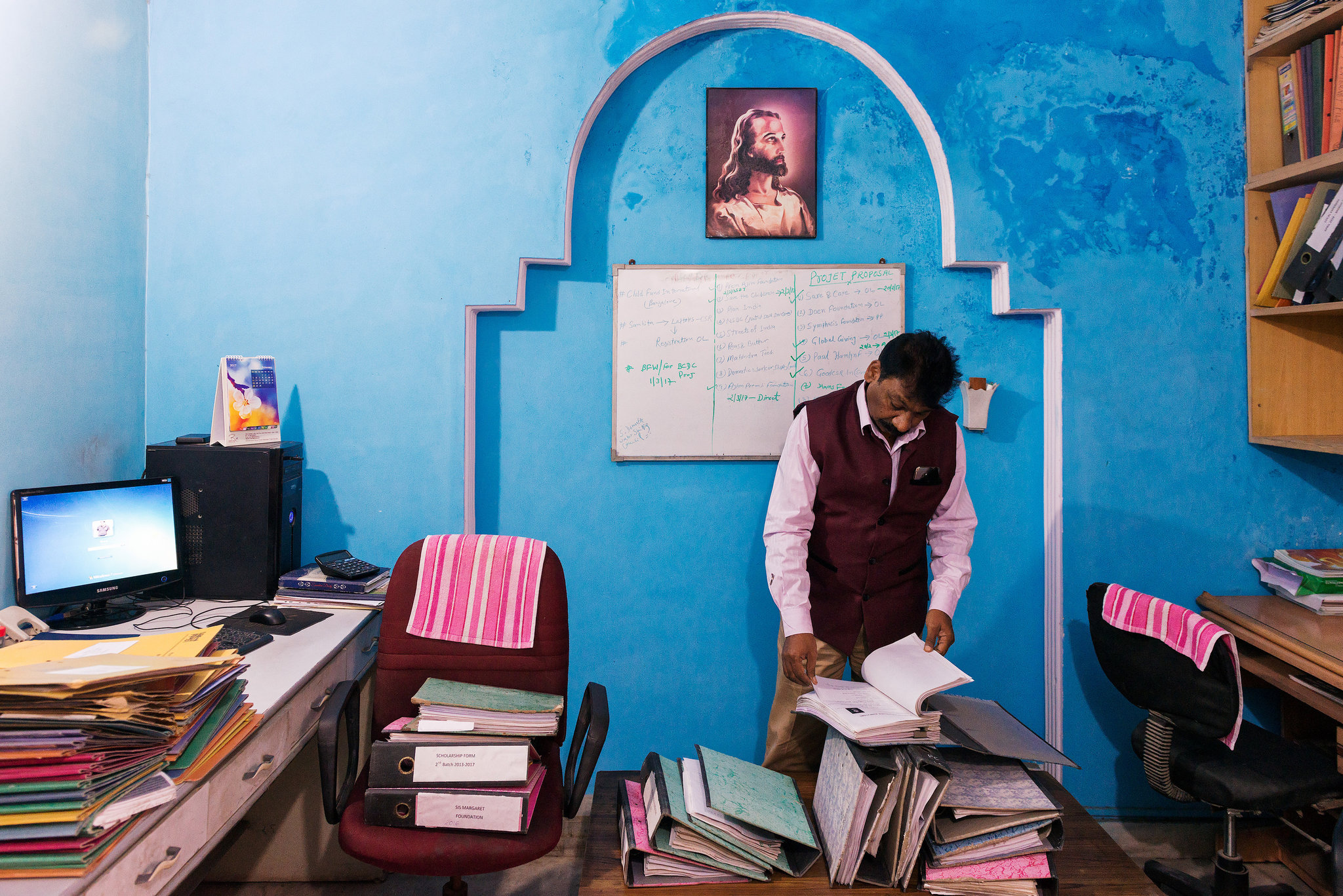 NEW DELHI — India’s crackdown on foreign aid will claim its most prominent casualty this month, as a Colorado-based Christian charity that is one of India’s biggest donors closes its operations here after 48 years, informing tens of thousands of children that they will no longer receive meals, medical care or tuition payments.

The shutdown of the charity, Compassion International, on suspicion of engaging in religious conversion, comes as India, a rising economic power with a swelling spirit of nationalism, curtails the flow of foreign money to activities it deems “detrimental to the national interest.”

More than 11,000 nongovernmental organizations have lost their licenses to accept foreign funds since Prime Minister Narendra Modi took office in 2014. Major Western funders — among them George Soros’s Open Society Foundations and the National Endowment for Democracy — have been barred from transferring funds without permission from Indian security officials.

But few have been as vocal about their struggle as Compassion International, which solicits donations through its $38-a-month “sponsor a child” program and distributes them through church-affiliated service centers. It has repeatedly ranked as India’s largest single foreign donor, transferring around $45 million a year.

Its executives vehemently deny the government’s allegation that it is funding religious conversions, and say India has given them no opportunity to rebut the accusation. Instead, they say they found themselves in murky back-channel negotiations with a representative of the Rashtriya Swayamsevak Sangh, or R.S.S., a right-wing Hindu ideological group that is closely connected with the governing Bharatiya Janata Party but that has no official role in governance.

“You think, ‘Wow, am I negotiating with the government or am I negotiating with an ideological movement that is fueling the government?’” said Santiago Mellado, Compassion International’s chief executive officer, in a telephone interview from the charity’s offices in Colorado Springs. He added that a briefing on the situation would be submitted to the Trump administration this week.

A spokesman for India’s Ministry of Home Affairs, which oversees regulation of foreign charities, declined repeated requests for comment on the case.

A Foreign Ministry official, speaking on condition of anonymity, following diplomatic protocol, said that Compassion International’s partners were violating Indian law by engaging in religious activities, and that the organization declined a government offer to re-register as a religious organization, which would have allowed it to continue its work in India.

Religious charities, which make up half of the dozen top international donors to India, are watching the case closely, Mr. Mellado said.

“What we hear from our friends in India is that it would be tragic if they were successful in shutting down Compassion, because that would leave other ministries very vulnerable,” Mr. Mellado said. “They are feeling like they’re next.”

India has long had a law regulating the use of foreign aid, but Mr. Modi’s government has applied it in rigorous fashion, canceling the registrations of more than 10,000 nongovernmental groups, mostly small ones, in 2015.

Sam Jebagnanam, a field officer based in Chennai, described the searches as “harrowing,” with staff members questioned through the night and forbidden from leaving the office, summoning a lawyer or ordering food.
The investigators, he said, focused their questions on a vacation Bible school funded by the charity. Seventy-six percent of the children served by the program are Hindu, and 28 percent are Christian, he said.
At another raid, he said, a top executive was interrogated under oath at 3 a.m.

“They kept asking him, ‘Why did you have a spiritual component to the program? What do you do in the area of spiritual development?’” he said. “We said we teach moral values; we do not force anyone into religion.”

Compassion International executives learned early last year, from an item in an Indian newspaper, that their group had been added to the list of organizations whose transfers required prior permission by the Ministry of Home Affairs, said Stephen Oakley, Compassion’s general counsel.

By summer, $600,000 in donations was stuck in an Indian bank account awaiting permission that did not come. In November, two of the group’s main affiliates — in Chennai and Kolkata — were denied authorization to use foreign funds.

In the United States, Mr. Mellado was pressing, with an increasing sense of urgency, for an opportunity to plead his case with Indian officials.

But the only interlocutors they could find were through unofficial channels. In October, a Washington-based representative of the R.S.S., Shekhar Tiwari, reached out to John Prabhudoss, who heads an umbrella organization of Indian-American Christians and has a long association with Compassion International and its leaders, Mr. Prabhudoss said.

Mr. Mellado said he was puzzled by the indirect outreach, but decided to give it a try.

“We are trying to navigate through understanding of the dynamics on the Indian side,” he said. “We understand that the B.J.P. and the R.S.S. are tied together somehow, so it seems to us that we also need to be talking to the R.S.S.”

Through Mr. Prabhudoss, Mr. Tiwari put forward a proposal: The government might view Compassion International more favorably if the charity routed a portion of its $45 million in annual charitable donations away from churches and through non-Christian aid groups, including Hindu ones.

“They were asking me, ‘How do you think we can solve this problem?’” Mr. Tiwari said. “I told them, instead of having all your partners Christian, have some Buddhists, Hindus, Jains, Sikh organizations.”
Mr. Prabhudoss and Mr. Mellado both said that the suggestion was to fund R.S.S.-affiliated organizations, though Mr. Tiwari denies suggesting that. They rejected the idea, which they viewed as “inappropriate,” Mr. Mellado said.
An official from India’s Ministry of External Affairs denied that the R.S.S. representative had any role in the government’s actions, calling the discussion “totally extraneous to the law enforcement action.”

Things went downhill quickly after that. In early January, Mr. Oakley, the general counsel, went to New Delhi to plead his case to India’s foreign secretary, Subrahmanyam Jaishankar, in a meeting also attended by the second-ranked United States diplomat in India.

It was the first and last meeting between the charity’s leaders and government officials, and Mr. Oakley described it as bitterly contentious.

As it came to an end, he said, a Home Ministry official suggested that Compassion International re-register its Indian partners as religious entities, a step that the charity’s legal team discouraged, saying it would lead to further paralysis.

“It was a very disingenuous offer,” Mr. Oakley said. “Either he didn’t know that was legally impossible, or it was an offer designed to end the meeting.”

Last week, word went out to the group’s 500 Indian partners that they would have to shut down their operations. Among them is Bethesda Charitable Endeavors, which funds a community center in a town called Haldwani, in the Himalayan foothills.

The center’s employees have cleared out four of their nine rented rooms, and 250 children have been told not to return there.
Pramod Dass, who directs the charity, organized a morose little closing ceremony last week in his Delhi office.

“I was heartbroken, because for the past six months, we were living in hope that something would happen,” he said. “Maybe a miracle.”

Already, 15,000 of the 145,000 Indian children regularly receiving services through Compassion International have been severed from the programs. Beginning on Friday, the sponsors will be contacted individually, at the rate of 2,500 per day, and asked to transfer their sponsorships from Indian children to children from other countries.

“That process is irreversible,” Mr. Mellado said. “We would have to start all over in India, and for 145,000 children, it will take years.”

Priya Saxena, 13, is among the children who have been asked not to return to the community center in Haldwani.

Over the four years she has been attending the center every day after school, she said, she has learned to speak and write English, received vaccinations for typhoid and eaten regular high-protein meals.

Her father, a vegetable vendor, earns a monthly salary of about 1000 rupees, or around $16.

“Now I do not know what the future holds for me,” she said. “I hoped to become a doctor. But now that we are told we will no longer have sponsors to see us through the education, I don’t know what will happen.”

She added: “This place taught me to have a life. It is finished now.”