Police have increased their presence in Rajasthan cities after the Udaipur murder, including in nearby Ajmer 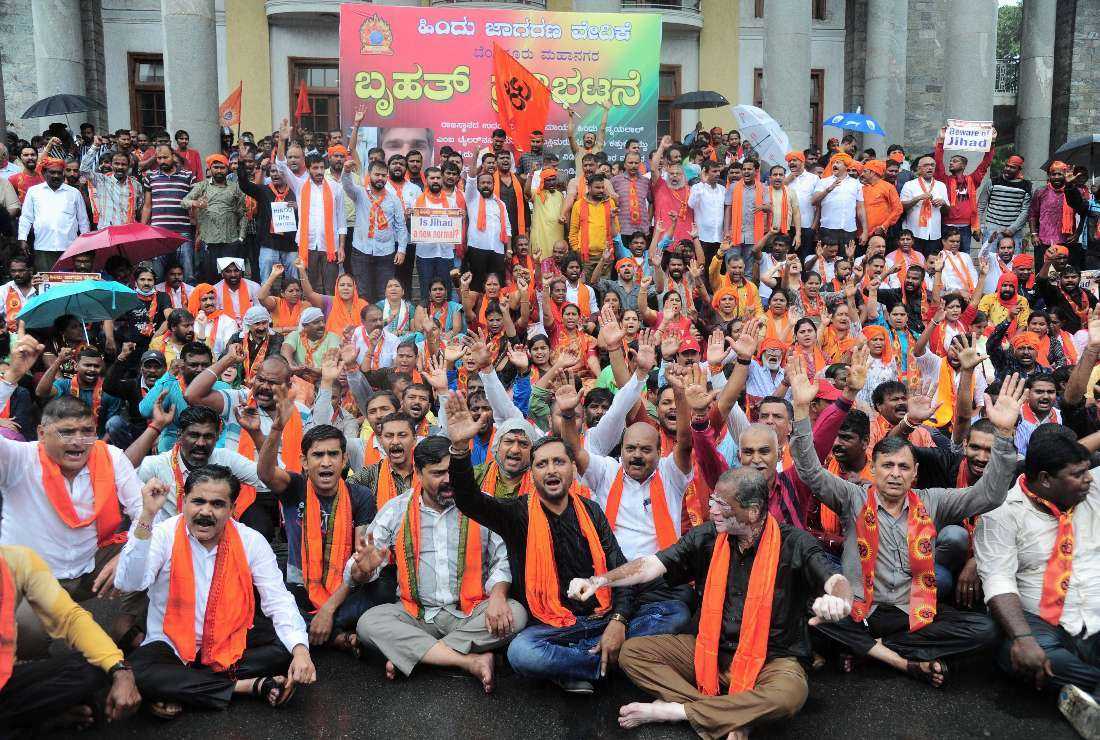 Activists of the right-wing Hindu Janajagruti Samithi organization shout slogans during a protest in Bangalore on June 29 against the killing of Hindu tailor Kanhaiya Lal in Udaipur. (Photo: AFP)

Hundreds of police were deployed in an Indian city on June 29 after the murder of a Hindu tailor allegedly by two Muslims in revenge for inflammatory comments about Islam by a ruling party member.

The attack — in which the men seemingly tried to behead their victim — in the western city of Udaipur was captured on a video that went viral and has gripped a country with a long history of communal violence.

They then justified their murder as a response to  Lal’s alleged support of comments about the Prophet Muhammad by a spokeswoman for Modi’s Hindu nationalist BJP party — remarks that have triggered protests across parts of the Islamic world in recent weeks.

Hundreds gathered outside Lal’s house ahead of his funeral on June 29, a day after several hundred protested and chanted Hindu slogans in response to the killing.

People on motorcycles and cars waved saffron flags — the color of the Hindu faith — and shouted slogans demanding the death penalty for the accused.

To prevent potential sectarian violence, authorities deployed 600 extra police and put the city of around 450,000 people under curfew, cutting mobile internet access there and in other parts of Rajasthan state

“Hang them, hang them. My husband has gone,” the man’s distraught widow told reporters.

“If the law doesn’t want to do anything, give them to us so that we can kill them,” said another relative.

The two young men were arrested on June 28 as they attempted to flee Udaipur by motorbike, news reports said.

The central National Investigation Agency said the men circulated the video “in order to trigger panic and strike terror among the masses across the country.”

To prevent potential sectarian violence, authorities deployed 600 extra police and put the city of around 450,000 people under curfew, cutting mobile internet access there and in other parts of Rajasthan state.

Rajasthan Chief Minister Ashok Gehlot appealed to people not to share the video as it would “serve the attackers’ motive of creating discord in society.”

“The involvement of any organization and international links will be thoroughly investigated,” Indian Home Minister Amit Shah tweeted.

On social media, members of the ruling BJP party and supporters depicted the killing as an attack on all Hindus, with thousands of tweets carrying hashtags like #IslamicTerrorismInIndia.

“You should be afraid of the day when Hindus too start giving reply to the insult in the same coin,” Jain said in a video message.

A demonstration in New Delhi called by a far-right Hindu group drew around 100 people shouting slogans.

The remarks about the Prophet Muhammad by BJP spokeswoman Nupur Sharma at a TV debate in late May sparked protests that turned violent in some parts of India and demonstrations across the Islamic world.

She was sacked by the party after her comments prompted the governments of nearly 20 countries to summon their Indian envoys to express their displeasure.

Lal’s wife told broadcaster NDTV that on June 10 her husband was arrested over a social media post supporting Sharma and released on bail a day later.

Five days later, the father of two said he had received death threats but on June 28 returned to work in his shop, she said.

The purported video of the killing — which police have not yet confirmed is genuine — showed Lal measuring one of the men for new clothes before he and his accomplice attacked him.

India has seen sporadic sectarian violence between majority Hindus and Muslims, who make up around 14 percent of the 1.4-billion-strong population.

Religious riots in the capital New Delhi left 53 people dead in 2020, while in 2013 another 62 were killed in the nearby city of Muzaffarnagar.

In 2002 at least 1,000 were killed in violence in Gujarat — at the time led by then state premier Modi. Most of the victims were Muslims.

Modi’s party has been accused of marginalizing the Muslim community since coming to power in 2014.

The row over Sharma’s comments followed anger across the Muslim world in 2020 after France’s president defended the right of a satirical magazine to publish caricatures of the prophet.