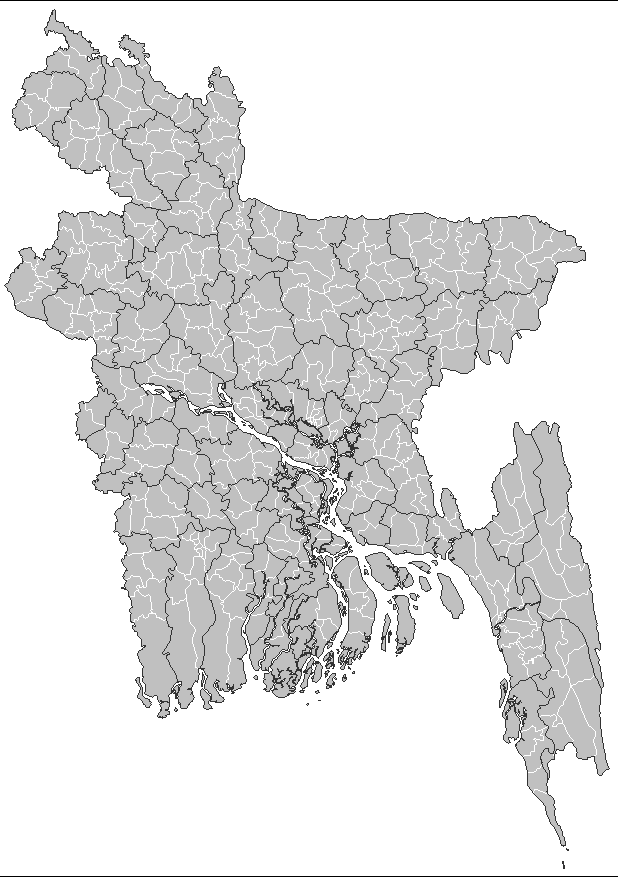 In recent times different donors and international organizations have stressed the urgency of local governance especially at the grassroots levels (Parker and Serrano 2000). To strengthen the Upazila and Union Parishad system in Bangladesh the World Bank suggested basic reforms to the legal framework for local governance to clarify powers and functions and to organize an effective system to supervise the performance of the Upazila along with some other recommendations (World Bank 2007). At present there are five different units and institutions of local government for urban and rural areas. Rural local government consists of three tiers—Zila Parishad, Upazila Parishad (UZP) and Union Parishad. The second tier is considered as the most important of all.

The units and institutions of urban and rural local government have “separate sets of laws and rules with distinct cultural practices which sometimes are contradictory and repetitive” (Ahmed 2013). The Upazila stands on its own as the basic unit in the development structure of the country as considered in politics, administrative set up and in the socio-cultural context of our society. The Upazila could not perform its functions due to the lack of delegation of authority (autonomy), centrally controlled administration and planning, and direct interference of bureaucrats and lawmakers.

In spite of this local government institutions are playing a crucial role in promoting decentralization and boosting rural development in Bangladesh. As an institution, the history of local government in Bangladesh is extensive but still it is struggling for the right structure to work on. Different literature argued that there is a huge harmonization gap among the different local and government actors and moreover noncooperation is noticeable between the different local and government actors (Khan 1997).

A good number of reforms have already been initiated for turning UZP as an effective local government institution but some crucial issues have not been addressed yet. In local government the Upazila Parishad is a vital tier but due to lack of appropriate administrative and institutional capacities, the Upazila Parishad is facing multifarious problems in delivering the expected public services at the grass root level (Khan 1997).  The new legal framework of UZP in fact has increased the rift among UZP chairmen, UNO and MP, making it more difficult to work.

Prior literatures on the upazila’s role and relationships focused on individual and group dynamics in the process of administration and Chowdhury (1987) argued that for uniformity of jurisdiction of all field level organizations decentralization of decision making power and authority is a necessity. Alam et al (1994) also argued that strained relationship between elected representatives and government officials at upazila level is a cause for ineffective upazila. Begum (2001) identified dualism of orders both by the UP chairman and UNO affect upazila administration in Bangladesh. The roles and relationship of politicians and bureaucrats in the policy process of upazila parishad in the formative stage was conducted by Ahmed, N. (2009).

He found that lack of understanding of roles and responsibilities is a cause for their misunderstanding and friction. Rahman (2012) examined the role and functions of elected representatives and bureaucrat at upazila level. Based on a survey he explores community perceptions on these issues. But different studies suggested that coordination and working relations among the MPs, upazila chairmen and local bureaucrats are conflictual (Rahman 2010; Ahmed & Selim 2012).

In the context of Bangladesh some studies have been made to understand the existing role of bureaucrats and elected representatives at the upazila level which mainly focuses on the problems of coordination in upazila administration. Factors like functional area and generalist-specialist conflict, lack of proper orientation in bureaucratic rules and procedures, lack of mutual trust and excessive central control are identified as influential factors.

However, the studies are not adequate enough to analyze the triangle of relationship of the UNO-MP-UZPC and no significant study on the legal framework which creates the anomalies and controversies in upazila parishad of the UNO in upazila administration has yet been conducted in Bangladesh. Therefore, this study can be of great use to fill the existing gaps in the literature of effective upazila parishad in Bangladesh especially on the legal issues which need to be addressed for strengthening the upazila parishad.

Upazilas were created through the promulgation of the Local Government (Upazila Parishad and Upazila Administration) Ordinance on November 7, 1982, during the period when President Ershad was in power. In essence the ordinance reconstituted Thana’s and upgraded Thanas to Upazilas. Each Upazila was presided over by a Parishad consisting of indirectly elected and appointed members, and a directly elected chairman. The chairman would hold the executive authority of the Upazila, while the Parishad members held regulatory and oversight powers.

The experiment, however, was short lived (1985-1991), and ended with the fall of the military-turned-civilian regime headed by General Ershad. However, in 1998, the Sheikh Hasina-led government enacted a legislation to reintroduce the upazila system where the MPs were given an advisory role.

In 2008, the military-backed caretaker government of Bangladesh promulgated the Upazila Parishad Ordinance 2008. Through this ordinance, the MPs were removed from the advisory role and two new elected positions of vice-chairpersons were created (one of them being a woman). Although an election was held in January 2009 under the new ordinance, the newly elected government subsequently decided to revoke the Upazila Parishad Ordinance 2008. It reintroduced the repealed Upazila Parishad Act of 1998 with provisions of having MPs as advisers.

Upazila is a statutory organization and an administrative unit of Bangladesh. The UZP is comprised of one chairman, two vice-chairmen (male and female). Chairmen of all union parishads under the upazila concerned, mayors of all municipalities (if there are any) and women members of the reserved seat.

Secretary of Upazila Parishad: Upazila Nirbahi Officer (UNO) becomes the Upazila Parishad Secretary and he/she does secretarial duties. An officer with the rank of senior assistant secretary from the Bangladesh Civil Service administration cadre is posted as the UNO.

Advisor to Upazila Parishad: The Member of Parliament (MP) becomes the advisor. After taking advice from the MP the Upazila Parishad can try to communicate with the government. It has been made mandatory.

Executive Powers of UZP: The chairman of the Upazila Parishad will utilize executive power to implement the decisions taken by the parishad. An Upazila Parishad chairman’s duties include chairing and conducting parishad meetings, monitoring and controlling all officers and employees, meeting financial expenditure up to certain limits fixed by the government, and commission. The chairman will also prepare the annual confidential reports of all officers and employees of the parishad. The chairman will supervise all accounts of the parishad with the join signature of the UNO.

Role and responsibilities of elected representatives and bureaucrats

Analyzing the present Act, Circular and Office order issued by the Government of Bangladesh some questions may lead to the discussion on who plays the key role in the UZP.

The inconsistencies and features of the Upazila Parishad Ordinances/Acts regarding the role of elected representatives and bureaucrats:

Legal framework and the barrier in functional UPZ

It is assumed that the local government institutions should get their autonomy in their jurisdiction through the legal framework. An analysis of the existing Act, circulars and other regulations for the UZP reveals the following issues as grounds on which role conflict arises in the UZP and make this institution less effective.

Is there any way out of this impasse?

Though there were a lot of reforms and restructuring efforts have been initiated in Bangladesh for making UZP effective the legal frameworks are the vital guidelines which result in overlapping roles and responsibilities between the elected representatives (UZP chairmen and MP) and the bureaucrat (UNO). On the basis of the analysis above the following issues are identified which need to be modified for effective local governance and functional UZP.

As a local government institute UZPs have not yet emerged as truly decentralized bodies. Moreover, due to certain institutional and legal constraints these bodies are failing to function as effective institutions. Unless these are scaled up to cover wider areas, the real impact cannot be properly assessed. As such, it is believed that if a comprehensive approach with wider area coverage is undertaken then the state of governance at the local level is expected to improve to a great extent.

Hopefully, all concerned with local government in Bangladesh will play a constructive role in propelling the country forward. As the government is committed to providing the people with a pro-people state machinery, all the functionaries of the state should cooperate with consummate sincerity and professionalism for turning the country into a middle-income country even before the targeted timeframe. 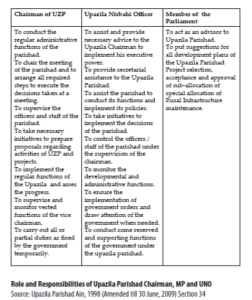