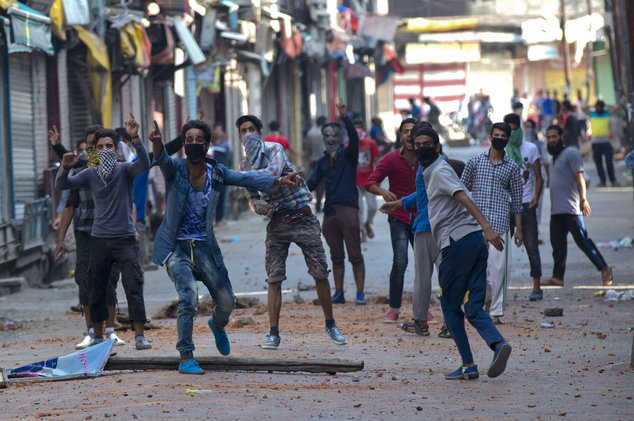 The current Uprising termed by some as “Kashmir’s New-Intifada” has completed its hundred days. The death toll reached over a hundred, the number of injured crossed fifteen thousand and some eleven hundred youth lost either full or partial eyesight. More than six thousand people have been arrested so far. Separatist Leaders have also been put behind bars. The damage to property of Kashmiris has not been assessed yet. Still, India is finding hard to crush the uprising. Even though brutalities of Indian forces are visible throughout Kashmir, their sufferings are not making it to the international media.

The killing of Hizbul-Mujahedeen chief, most famous rebel leader Burhan Wani on July 8 was followed by popular uprising throughout Indian-held Kashmir. Millions of people came out in protest, shouting slogans of Azadi. Wani’s martyrdom should not be interpreted as the leading cause of the uprising; rather it instigated the latent frustrations of the Kashmiri people. The people were already preparing to go for protests after Eid-ul-Fitr against oppressive Indian policies. There was enormous resentment prevalent before Wani’s martyrdom against Indian policy of creation of separate Pandit colonies in Kashmir.

Nor the emergence of the uprising was first of its kind. Such popular uprisings have been witnessed in Kashmir in the past during 2008 and 2010. However, the current one is typically different from old uprisings in several ways. The present uprising continued from the frustrations of the past and grew in intensity, duration, and methodology. The overwhelming popular support for the separatists and militants is not something new, but its proportion and intensity indeed is. The people are adamant to continue their strikes and are ready to sacrifice much more for their goal of Azadi (independence).  The current uprising is predicted to become the longest revolution in the history of Kashmir in that, the current methods of demonstrations and protests are entirely new and were never experienced before. The graffiti presentations on the fences and shutters, freedom songs on mosque loudspeakers in the evening, candlelight protests arranged over words of Azadi (independence), bike and car convoys and public Azadi conferences are new methods of resistance against the Indian state. Night watches by youths to guard their villages are also something new. The women are on the road shouting slogans of Azadi along with their men folk.

Unlike the past, the people are clear about their objectives of resistance. Their opposition was not directed towards any particular grievance or wrongs of the central government. They presented and only demanded, Azadi or independence, nothing more, nothing less. The people consider Kashmir as a colonial state, Indian troops as occupiers and cronies of the Central Government as the puppets. This helped them to identify new enemies and carry new targets. Besides Indian forces, Kashmiris have identified politicians, local police and local military personnel as their internal enemies. Many incidents in the past hundred days took place where the protesters burnt houses of policemen and politicians. Many police stations and government buildings were also torched, symbolizing demolishing of colonial structures. This realization is something new.

Besides, several other new developments were observed within the current uprising. The uprising received overwhelming support from all sections of people. Shias and Sunnis collectively took part in protests. Other religious minorities such as Sikhs also supported uprising openly. The uprising did not remain confined to cities but expanded to the remotest areas and even beyond Kashmir valley. These developments are more crucial because they brought disaster to the Indian policies and narratives. Hence, it is important to uncover the impact of these developments on Indian policies and narratives.

The Jammu and Kashmir are comprised of three regions, Jammu, Kashmir, and Ladakh.  Though a Muslim majority state, its regional diversity had subverted its majoritarian character. India always exploited this political complexity and projected Jammu and Kashmir as a diverse and complex state where Kashmiris constitute only one community among others. Indian policy misled international community by claiming that the problem is only in Kashmir and even within Kashmir, presented only five percent people as ‘miscreants’ or ‘trouble-makers.’ The current uprising has debunked this distortion. The protests and shutdown were not only observed throughout Kashmir valley but also in Chenab valley of Jammu region and Kargil areas of Ladakh region. The people all across the Jammu and Kashmir not only showed sympathy but actively cooperated in the uprising. The extension and expansion of the uprising had indeed buried old Indian narratives of ‘Kashmiri only’ and ‘5% only miscreants’.

Besides, Jammu and Kashmir is also complex in its composition. It is highly diverse with many social and religious communities. Besides many religious minorities, Muslims themselves are divided into several sects. Indian policy had always remained to widen gap between different religious sections and factions within the state to maintain a “divide and rule” policy. This diversity has also led India to make massive propaganda that only some sections of Kashmiris have a problem with India. First, they make distinctions between Muslims and non-Muslims giving assurance that later are pro-Indian, then Muslims are divided into Shias and Sunnis presenting the latter as pro-Indian, then Sunnis are divided into sects, Jama’atis, Ahl-e-hadith, Tablighis, Makhdooms, etc. presenting only Jama’atis as anti-Indian. The current uprising has brought disaster to this narrative as well. The Sikhs and Muslims collectively resisted against the state. Shias and Sunnis took collective marches and protests against the Indian state. Moreover, the protests were led by religious leaders from all sects. So-called apolitical Tablighis were on the forefront. Indian policy of investing on widening the gap between factions and groups and its so-called categorical distinctions narrative has indeed found its grave.

Besides, India has always blamed Pakistan for fomenting tensions in Kashmir. It often claims that stone throwers receive money from ISI (Pakistani Intelligence Agency). Given the overwhelming support to resistance movement and million people marches is debunking the validity of its propaganda. Such amount of people is on roads resisting Indian presence that Pakistan’s whole budget would have been insufficient to persuade them. While India has always maintained its political position by blaming Pakistan for a proxy war, the original nature of uprising has threatened its political stance. The present uprising has in fact intensified Indian frustration. India is contradicting its discourses.

The failure of Indian narratives is Azahar min-shams (visible as the sun) and is also shown by its different actions and policies. India has almost realized its inability and instead of presenting its meta-narratives now resorts to mere rhetoric and hysteria. It now offers Baluchistan issue as an alternative to Kashmir issue. Indian policy makers even highlight issues of “Gilgit-Baltistan” and “Azad Kashmir” to bring some parity in its narrative with Pakistan. Some strategic experts are interpreting this policy as ‘offensive-defensive doctrine’ (hitting the enemy while maintaining one’s defensive position). Whether right or wrong policy, but it is not a suitable political alternative to Kashmir issue. It is highly incorrect political stance and has no potential to defend Indian position on Kashmir at the international level.

These are little tactics to avoid international attention on Kashmir issue. The Indian tactics to delay dialogue on Kashmir issue is also politically weak and illogical. Sometimes it diverts attention from Kashmir resistance movement through producing false scenarios, sometimes through fake attacks, war hysteria, and at other times by referring to terrorism, surgical strike dramas and the like.  But what about it’s political Position on Kashmir? For how long would India mislead the world community using these tactics? India is losing its political ground on Kashmir issue, and its narratives are fading both domestically and internationally. The Indian frustration is visible enough in that, Modi threatened to dissolve the Indus-water treaty with Pakistan.

The death of Indian narratives had also brought the crisis in its potential to control Jammu and Kashmir. India had failed to legitimately control Kashmir politically therefore, resorted to control only through force. Unlimited powers had been given to the military to use whatever mechanisms to quell the current uprising. Indian troops use pellets, bullets and other weapons on peaceful protesters. The armed forces operate like wandering dogs. They intimidate and terrorize people. They enter into homes and beat people inside. One Lecturer, Shabbir Ahmed was killed in custody by beating until death.  Another, 12-year-old young Junaid was also murdered in his home. Even the Ambulance drivers while carrying patients had been shot.

Besides sticks, bullets, and pellets, India uses choppers and drones to control Kashmiris. On the day of Eid-ul-Azha, India used its all might to prevent Kashmiris from protesting but was unable to control it.  Despite such restrictions, Kashmiris heavily protested at the cost of their lives. Two were killed, and more than 80 were injured on the same day.

The military not only control Kashmiris by heavy use of weapons but also hurts them economically. They resort to vandalism at night and destroy the properties of Kashmiris. They broke window panes, gates and damaged their properties such as motor cars, bikes, and other materials. Recently, the armed forces set ablaze paddy crops in Budgam areas. They also destroyed apple orchards in many sections. The prime intention of Indian state behind these tactics is to induct fears in Kashmiris that they are losing through resistance movement and it will not give them anything.

The International Community appears to be in a deep slumber when it comes to Kashmir issue. Apart from mild condemnations of human rights abuses, no substantial reaction emerged from anywhere. The Kashmiris feel the international community has abandoned them and looking the other way while these massive sufferings are being perpetrated. The superpowers like the United States and the United Kingdom do not want to antagonize the Indian state in fear of disturbing their business interactions. After all, India is such an emerging power and they do not wish to jeopardize this opportunity to make huge economic gains to their respective nations.

When it comes to threats of war between India and Pakistan against each other, the U.S. condemns Pakistan immediately but they look the other way when the Kashmiris are brutally suppressed and killed. What if the Indian forces resort to ethnic cleansing and mass genocide on a larger scale? What would be the response of International community? The United Nations is silently observing the atrocities on the Kashmiris without taking any action. The international community’s blind eye to the Kashmir episode is disheartening to the civility of the human race.