Kashmir Uprising: A New Dilemma after 2016 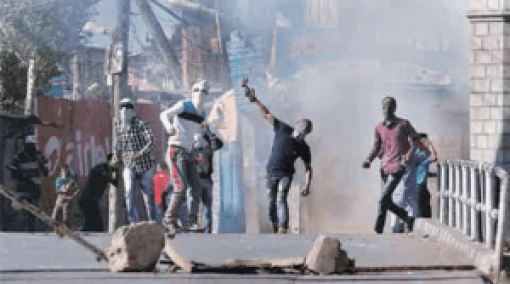 From July 9, 2016, the uprising after the death of Burhan Wani should be a matter of utmost concern not only for India but for the whole world. The government’s approach only exhibits value of the Kashmiri resources and not the aspirations of its citizens. The State politicians are like any other politicians, twisting and turning to get elected and amass power and money. They ignore the killings and merely act like puppets of the Indian government. If the administrations at the center and the State keep ignoring the aspirations of the Kashmiri people, they would be heeding the lessons of history. Just looking the other way, thinking the matter will settle down, would be a grave mistake. It will exacerbate human sufferings and propagate discontentment.

According to Italian thinker Giorgio Agamben, abandonment of natural life to sovereign violence should not be a norm. Similarly, Walter Benjamin in 1978 stated that law itself is a kind of violence that constitutes and maintains social relations by creating a monopoly on force and coercion. The Indian government has taken the path of sovereign violence as the dominant paradigm to run the state of affairs in Kashmir. The government justifies the use of lethal weapons to kill and maintain law and order.
The discourse of Kashmir history changed from 2008 as the people of the valley openly challenged the government, demanding plebiscite and Azaadi (freedom).  The rage of the stone pelting youths and raising of the Pakistani flags shows how isolated the Kashmiris are about the rest of India. There are lots of evidence that indicate the people of  Kashmir Valley do not want to be a part of the state of India.

The Kashmir issue became more interesting after the government offered land to Amarnath Shrine Board at Pahalgam in 2008.  Subsequently, the agitations in 2009, 2010 and 2014 strengthened the anti-government movements and mobilized the youth towards armed revolt. Burhan became a role model while in the rest of India, he was only a poster boy. On 8th July 2016, when the whole valley marched towards his village to attend his funeral, it was a demonstration of solidarity against the state. The countries like Pakistan, Iran, and Saudi Arabia, where hundreds of thousands of people offered Absentia-funeral (Gaebi Janaza). The funeral of Burhan Wani presented a different image to the international community in that, Burhan was considered more dangerous dead than alive. The world community gave statements on solving the dispute. The countries like Norway, China, New Zealand, United Kingdom, and Turkey demanded the both India and Pakistan solve the conflict and pressurized India to stop human rights violations. The uprising of 2016 is entirely different from the previous ones and what was unique this time; the people were solidly united despite their sectarian identities.

The most notable events that occurred during this year is that the voice of freedom was loud and clear and there was no sign of fear. Women and children came out on the streets and chanted slogans of freedom. The orderly pro-freedom movements in every district became a headache for the state authorities. New slogans like “ye pellet bullet …na bhai na, ye jabri kabza… na bhai na” became favorite slogans of the Kashmiri people. The unrest in the Kashmir valley is past, but the people have strong feelings that has shaken the State machinery and the democratic process. The repressive measures taken by the State government like arbitrary detentions, slapping PSA, charging people for arson and rampage of property created fear to some extent. It also created severe distrust between the people of Kashmir and the State. The law enforcement agencies tried all methods of suppression to the voice of self-determination by using blunt force in each case, like that in 2008, 2010 and now 2016.

The demand of plebiscite, the slogans of Azaadi (freedom), exhibiting the rage by stone pelting youths and hoisting the Pakistani flags only depict the isolation of the people of Kashmir towards the Indian State. The government of India must think deeply and handle each and every issue very carefully. Eventually, they have to bend towards the demands of the people as in a democracy, people come first and not the organized State. Human rights and human aspirations cannot be assaulted time and time; again and again.