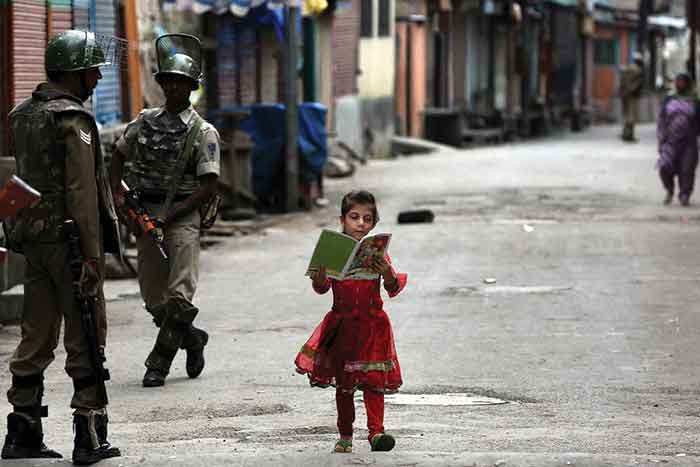 In about a week’s time abrogation of Article 370 and bifurcating of erstwhile state of Jammu and Kashmir will complete one year. The ruling party of India BJP has decided to celebrate the event in a big way. It was 5th August 2019 when Indian Home Minister Amit Shah and his team bulldozed through a resolution for abrogating special provision of the constitution which gave Jammu and Kashmir State certain safeguards. The act was carried out on the back of heavy army and paramilitary presence in the state and, subsequently, use of huge majority available in the Parliament saw the passage of the resolution with thumping of tables. Prior to that hapless Kashmiris were forced to sit behind  the walls of their houses as forces personnel peeped into the lanes and by-lanes lest a rebellion takes place. They sat humiliated, sad and helpless just watching in despair. Not only the common people but politicians across the spectrum were whisked away and put in fortified buildings. The communication blockade unnerved them as they could not communicate with the outside world. Phones and internet were put off and even local TV channels were barred for initial days .

The exercise was three pronged .One to convey the message to Kashmiris that ‘we can do anything , you do what you can’.  Second, to mainland India that we must be seen as a strong government in the crucial elections in three states. Third , we don’t care for any international repercussions. In effect at the moment Kashmiris could do nothing in the face of heavy forces presence and continuous curfews ,referred to as section 14 4 to hoodwink the public opinion. Removal of article 370 was played in the election campaign vigorously by BJP politicians .How much benefit was extracted from Article 370 music is another question. However, one thing became clear that contrary to “we don’t care for international opinion” perception the issue got international attention at many forums. Strong communication from Sweden highlighted “the importance of resolving  Kashmir issue” can’t be brushed aside. In the faceoff with China it is widely believed that abrogation of article 370 became a catalyst for Chinese military buildup and subsequent skirmishes along borders.

Article 370 was invoked in the backdrop of Delhi agreement in early fifties and Kashmiri leadership was convinced that their cultural and economic ethos won’t get invaded at any point of time. Other provision of 35 A was introduced to safeguard the loss of land to non Kashmiri buyers making the locals landless and depriving them of inheritance. The provisions have a historical background and  not been introduced out of a vacuum.

“ In 1924-25 local Pandit community arranged peaceful protests under the slogan Roti Agitation. The Maharaja had affinity for Punjabi officials .The Kashmiri Pandit community had some educated youth and wanted the clerical jobs be given to them. This act would on one hand provide them jobs and on the other hand made them accessible to the Maharaj’s court.” Explains a former professor of history department.

After “conditional accession” the provisions for safeguards were introduced at the behest of local political leadership which had developed camaraderie with likes of Pt. Nehru, the PM. However , as is believed to have been commented by Mr. Nehru himself the said article lost its sheen over the years and almost all provisions of the Parliament acts were introduced making 370 as ineffective as possible. What remained, therefore, was an empty sweet box . Removal of 370, hailed by Modi Shah combine, was in effect a hollow success . Similar is the case with 35 A which bars purchase of land for non Kashmiris.

“S M Abdullah in late seventies had allowed the use of land within industrial estates on a lease  deed of 90 years extendable as the need may arise. Presence of some of the big business houses, particularly in Jammu area, is the result of this ease.” A former director of State Industrial Development Corporation  makes it easy to understand.

One more concoction is played by right wing politicians that local women married outside are deprived of inheritance . The High Court of J&K has since allowed the provisions in favour of such women and their children. Article 370 as an impediment in development and as a cover for corruption and militancy is a white lie and canard spread by opportunist politicians . AfSPA the dreaded law giving impunity to forces is in vogue and 370 has never ever put a spanner . If 370 was a cover for corruption then there should have been no corruption in MP, UP , Maharashtra and other places.

Bruised and humiliated by the action of revocation of the act majority of Kashmiris have not taken the issue lightly and as played by New Delhi. They analyze the act in different ways. “The action was taken when the tourist season was at its peak and the season for apple harvesting was near by . The government wanted to harm Kashmiris as hard as it could because economic prosperity of Kashmiris is an eyesore for the present dispensation. If not so the same action could be taken during the winter session of the parliament.” A young student exhibits his anger. His observation  is supported by the recent news report carried by various news portals which reads, “The union territory of Jammu and Kashmir has lost nearly Rs 40,000 crore (USD 5.3 billion) since the government abrogated Article 370 last year in August and imposed a severe clampdown in the region which was followed by another lockdown imposed in the wake of the Coronavirus outbreak.”

Kashmir, since August 5th 2019  remains blocked ,first due to government declared curfew followed by an undeclared call for strike and then due to Coronavirus outbreak. Business establishments, transport , schools and colleges remain shut. Telephone connectivity remained snapped for many months  and the high speed internet is still blocked. Even grand mosque in Srinagar has not hosted Friday prayers for about a year now due to restrictions which amounts to interference in religious affairs. Internet blockade has rendered internationally connected centers idle and hundreds of local youth have lost jobs. Temporary arrangement teachers have been asked to sit home. Hotel and construction industry has shut the doors for their workers. Jammu based business community has been crying hoarse over the set back to their business interests due to Kashmir blockade .Their leadership expressed their concern twice publically in press statements.

Will the issue die down slowly or there is much more to be witnessed in future can’t be predicted now. Voices have been raised in Jammu province for domicile act and promulgation of article 371 as the people now realize that Jammu area may face the first brunt of settlement of non J&K subjects. But instead Domicile certificates are being distributed to those non locals who spent few years, ranging 7 to 15 years, in the area. Even in Ladakh area a respected person  like Sonam Wangchuk  has warned of secessionist attitude in absence of guarantee for safeguarding of local culture and ethos. Aggressive and hateful reactions from some of the people in mainland India like ‘ Israel type repression’  and ‘raping of Kashmiri women’ won’t go unnoticed in Kashmir.

A sarcastic analysis has been made by a journalist saying, “In last one year only achievement by the union government is that it has shrunk the space for mainstream politicians who worked as buffer between seething Kashmir and New Delhi.”

Shafi Ahmad is a Kashmir based columnist and author of the novel “The Half Widow”. He  can be mailed at wanishafi999@gmail.com