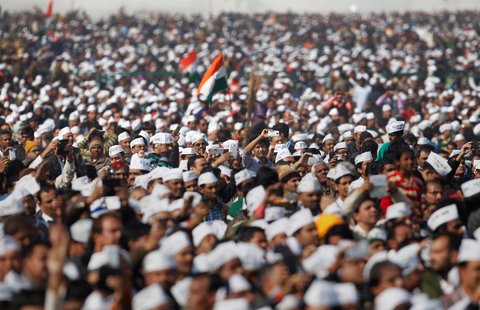 Kanhaiya’s recent remarkable speech in JNU and the series of interviews with prominent news channels aftermath reflect an articulate and an energetic politician in him. His much used Azaadi cry speaks of his urge for the inner social development in the country and fight against deeply embedded exploitation, disparity and perpetual alienation that millions of Indian’s are beset with. He may sound idealistic sometimes however while elaborating his scheme of thought, he is succinctly able to explain what he means and how it can be actualized. More than anything he has started using the language of jibes and sarcasm on vital issues with political politeness adding deliberate prefixes like Maananiye, Ji, etc (and then making fun of it as well saying Kehna hi padega), to be politically correct, reflecting his post jail Avatar and determination to take on big politicians in the country. He is searching for totality in his slogans towards equality for all in India, which in no way is a silly idea and touches everyone who feels concerned with day today issues and unjust inequalities. His jibes at the power elite are factually correct and politically mature that itself speaks of his future in active politics. He is fearless even after so much of construction, arrest, assault and labeling against him. His truth is so provocative that even violent fringes now are announcing a bounty on his head as per the new posters (eleven lakh rupees). Also someone has announced a prize of five lakh on chopping Kanhiya’s tongue which reminds me of the very Marxian idea that ‘the weapon of criticism cannot replace criticism by weapon’ and they are so weak to fight Kanhaiya’s ideas with ideas but bring in weapons and violence and not counter ideas. Let those who disagree with Kanhaiya, approach him and debate with him if they have guts and really some thought. He is fearlessly taking on big figures for he represents truth.

His ideas of thought on pressing issues are definitely forcing conscious and rational minds to think. One wonders is he a yet another Kejriwal in making and will the day come (may be after two decades) when he will probably be sworn in as the Bihar’s Chief Minister. The beginning for him has already started when the political assignments have already started coming to him-though the beginning has been made by communists. The quest remains that is Delhi’s JNU and Delhi’s social churning giving birth to yet another Aam Admi who is sweeping the public support gaining a political foothold in politics .He is already a hero now given his grabbing of national headlines, statements etc,? Will Kanhaiya be called as Left’s Aam Admi only the time will tell? Who made him the hero and what gave him the stature he is at now is known to one and all. I can only say sometimes blunders committed out of power are beautiful and useful and this time Kanhaiya is the beneficiary. We need some universal good to be achieved in India and for that the leaders like him are needed as we have been living in a culture of rhetoric, religion, fringe mentality, muscular power and cult and dynasty politics but need a democracy that encourages debate and discourse on everything including the sedition itself.

Kanhaiya is frankly speaking not made into a hero by media but has already been made into one by virtue of his hurried arrest and he is also not a cult hero as maintained by some analysts. His cult though is all right thinking and exploited India. Those who criticize his marathon speech in JNU campus should cite what was wrong in that speech and challenge him on factual grounds rather than hate mongering. Where were these Kanhaiya critics who now are irritated with the media covering him like a hero, when doctored videos maligning him as anti-national were played by some other channels and when he was beaten by goons in the garb of lawyers? Given his balance of thought, apt analysis and smart comparative skills, I would say, now he first is a politician and then a researcher who may or may not continue as a researcher but will definitely be searched by political parties. He may soon turn into a star campaigner in the upcoming state elections thereby denting prospects of many others. If he agrees to the already offers made, he may prove detrimental and give sleepless nights to the strong political parties given his oratory skills, apt discourse on inequality, poverty, farmers, inflation, intolerance, etc, and his clarity of thought on rampant social injustice especially his favourite slogan series on Azadi may win him millions of fans and supporters.

Kanhaiya has started a new era of thought and a fresh spirit of Bol (speak) that young India needs to carry forward. Faiz Aptly says,