In the backdrop of recent Indo-Chinese border clash, there came a spate of speculations from observers and political think tanks about reshaping the South Asian geo-politics. Most believe that India losing its octopus grip on its neighbors as the Giant Panda from the north is making its increasing presence in the region. Pew Research Center found in 2014 that 72% of Indians worried about military conflicts emanating from border disputes, some of which kept lingering for decades. The present crisis is a testimony.

Looking at the writings and Facebook comments of Bangladeshis, the feeling seems to be of happiness, some even hoping for a full-scale fight so that Indian obnoxious hegemonic control comes to an end. They are not alone. Pakistanis, Nepalese, Sri Lankans, Maldivians are in tandem. Tiny Himalayan state of Nepal stood its ground under Indian bullying tactics in recent days. Pakistan has always wanted India to be brought to its senses before it attempts another misadventure. Even hitherto tamed Bhutan is giving a second look at its Indian ties. Doesn’t look good for the self-imposed Big Brother! And, it certainly goes counter to Indian Prime Minister Narendra Modi’s “Neighbors’ First” stance.

A street urchin in Dhaka knows how Sheikh Hasina came to power and how she kept holding on to it. In exchange, the Prime Minister obliges every demands of her sponsor, almost free, at times at the cost of national interests.

Thus, groaning under an unchallenged India-sponsored fascism for the past 12 or so years, general public in Bangladesh are not unjustified for their growing anti-Indian sentiments.  Dr. Taj Hashmi, Ambassador Serajul Islam, Professor Ali Reaz and others reflected them in their recent writings. Indian high-handed hegemony on its neighbors was their focus.

India kept stillborn the (President) Ziaur Rahman-initiated South Asian Association of Regional Cooperation, because it sought sovereign equality among its members. Hasina’s Bangladesh has been a sellout; people know why and the Prime Minister had no regret in admitting it publicly. Pakistan is an exception. Since 1947, India found it difficult to reconcile the country’s existence and made various overt and covert attempts to undermine it, including its war in 1971 to break it. The Muslim country went on to acquire improved nukes to counter those of the self-serving “Big Brother.” Islamabad, with its cozy friendship with Beijing, has always been a chronic headache for the Chanakyas in New Delhi. On the other hand, Indo-China border remains a recurring source of trouble.

India and China relations dates back to 2000 years when Silk Route was used for trade and cultural exchanges. Buddhism expanded to China and the Far East through this channel. Chinese opium came to the British India resulting in the Opium Wars. Sikh Dogra Rajas of Kashmir annexed Ladakh and invaded Tibet in the nineteenth century but the Chinese drove them back. The Rajas later developed their own trouble with the British. In modern times, India was one of the first countries to recognize the Peoples’ Republic of China in 1950, in place of Taiwan.

Despite the slogan of Hindi-Chinee Bhai Bhai (Indians and Chinese are brothers), their border remained hot spots of conflict. China was never content with its Himalayan demarcation, which remained largely undefined in the large inaccessible swaths. It continued to claim Ladakh, parts of Arunachal and even of Bhutan, based on its border agreements with the British in the nineteenth century. India and China fought a few major to minor wars. In 1962, China sliced away Aksai Chin from Ladakh. They faced border skirmishes in 1967 and 1987. In 2017, a conflict of infrastructural interests at Dhoklam, in the triangular junction of China-India-Bhutan, left dozens of casualties. In the latest conflict in the Galwan Valley, Chang Chenmo and Pangong Tso, China claimed to have taken 60 square kilometers of Indian held territory. India lost 20 men, including a Colonel while China admitted to have lost 5 soldiers. 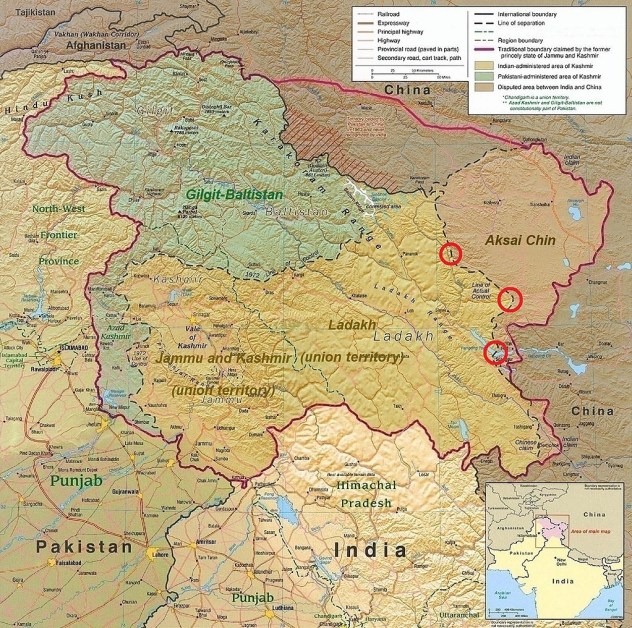 But China’s economic war is winning big. It is the largest trading partner of India from 2008. In 2018, their mutual trade hit $90 billion, 70% of which in China’s favor. That did not count another $35 billion in Indo-Hong Kong trade. Hong Kong is now a Chinese territory.

In the political and strategic arena, the two countries are in an unequal competition. Even with US strategic backing, India fails to check Chinese advances in South Asia and to its south. Most people, even many Indian thinktanks believe that the South Asian “Big Brother” is losing ground to China. They also acknowledge Indian heavy-handed hegemony is to blame.

China accepted Bangladesh only after Sheikh Mujibur Rahman left the scene in 1975. President Ziaur Rahman (1975-81) was the architect of Sino-Bangla friendship, which was further strengthened by Begum Khaleda Zia during her more than two terms as Prime Minister. I thought Hasina’s trip to Beijing in 2019 was an attempt “not to miss the boat.” At best, it could be a proforma exercise, even though the northern giant didn’t look kindly to her father. Earlier, Chinese President Xi Jinping arrived Dhaka in 2016 with a gift of $24 billion for Bangladesh joining his mega project of BRI (Belt and Road Initiative), a new Silk Road. Sheikh Hasina needed the large cash that her sponsor, India, could not provide. She needed funding for her various prestigious projects to demonstrate “development” against destroyed democracy, stolen elections, trampled freedom, discarded rule of law, and above all, almost total public disapproval to her authoritarian rule. Another $64 billion Chinese Infrastructure Fund is in the process.

An authoritarian regime itself, Beijing perhaps had no qualm to support another fascist entity. Its assistance programs are popular and people oriented. It invariably tries to stay away from host country’s domestic politics. China definitely knew how Hasina administration was tied to India, China’s adversary. Awami League was a tested ally of New Delhi. But the regime is highly unpopular in the country. Yet, it decided to back it in the “stolen election” in December 2018. That’s where my equation fails to match. If China is trying to play the India-role (backing a fascist regime) in Bangladesh, it may soon face the same wrath as India does today. On the other hand, if China wanted a foothold in Bangladesh and in the Bay of Bengal, it would have been prudent to invest in a party or entity that would be more conducive for its South Asian policy. To me, Awami League doesn’t fit the bill.

When asked, Mr. Zoglul Husain, a freedom fighter in the independence of Bangladesh and a renown political analyst, put it this way, “…the government (Bangladesh) wants to remain friendly with India while gaining military and financial support from China….China keeps trade and diplomatic relations with any govt that wants relations with China, so China is not tied to any party.”

While living in Malaysia in the mid-eighties, a Malay friend told me that other than their hair, nothing is straight of the Chinese. Sri Lanka learned it the hard way. It cannot get out of the Chinese loan entangle, which is getting knottier on default payments.

Is India Losing in Bangladesh?

Dr. Hashmi, Ambassador Seraj and Dr. Reaz think so. However, India’s interest is deeply entrenched, particularly over the past 12 years of Sheikh Hasina’s administration. The country surrounds Bangladesh in three sides with more than 4000 kilometers of border. Even in the southern Bay, Bangladesh has virtually ceded control to India. Can Bangladesh shed all these off? Not an easy proposition. And the Awami League is certainly not the likely candidate for it. It believes in the Indian story that they liberated Bangladesh 1971. So, it can have a free hand in Bangladesh. Not correct. Zoglul Husain says again, “In 1971, the people of Bangladesh fought for independence from Pakistan, but India joined the was to divide Pakistan and turn Bangladesh into a subservient state under India.” We see the truth in his statement.

We do not deny Indian support for our war efforts and for providing shelter to the refugees who fled the military brutalities. But that does not mean the Indo-Bangla friendship should be a one-way traffic. The recent Indo-China border clash and China’s increased clout in the region, offer an opportunity to Bangladesh to play its cards right and to the best of its national interests. The people of Bangladesh seek a friendly India with a Win-Win relationship.

Why is India Whining?

If China is buying Bangladesh, as India thinks, what is New Delhi’s problem? Why is it grumpy? As if moaning: মোর বঁধুয়া আনবনে যায় মোর আঙিনা দিয়া। (I watch my bride walks away from me). India’s use of the demeaning term of khairati (dole) of Chinese tariff concessions and “termites” to Bangladeshi immigrants, if any, do not go well with the people (1.9 million Bengali illegals in Assam are waiting to be pushed into Bangladesh, even though they may not be Bangladeshi citizens), To the contrary, half a million Indians work in Bangladesh, legally or illegally. They remit home over $10 billion annually, which is India’s fifth largest overseas income. So, who is living on whom?

Sheikh Hasina’s new economic and military partnership with China understandably didn’t find favors with her Indian bosses. Their agent Subir Bhaumik, with his sidekicks, already staged two preemptive coups in Bangladesh. One was military, in which some senior officials were said to be making a plan to oust the pro-Indian top brass in an attempt to ultimately overthrow the regime, if I got it right. When it “leaked,” some affected stalwarts posted Wailing Notes on the Wall vouching for their pro-Hasina, pro-India loyalty. The other was civilian, in which an All-Party Government was to be formed with Dr. Mohammad Yunus of Grameen Bank as President and Sheikh Hasina as Prime Minister. To me, it was the weirdest combination! It is Bhaumik’s kite flying, as Ambassador Seraj coins. Bhaumik’s message was not missed. First, to alert his “Apa,” that’s what he calls Hasina, to eliminate anti-Indian elements, and second, to warn that no anti-Indian element can escape their Radar.

China usually doesn’t do things in haste or on impulse. It goes slow and steady. It doesn’t want the border crisis to escalate further. India is no less important to it, conforming to the Chinese saying: “Close neighbors are dearer than distant relatives.” It has achieved its short-term objective: telling the monkeys not to mess with the dragon. The two sides decided to cool down and stay where they were. Meanwhile, China holds whatever it claims to win in the glacier. A giant panda style, slow and steady!

R Chowdhury is a former soldier and a freedom fighter in the war of liberation of Bangladesh. Enjoys retired life in reading, writing and gardening. Writes on contemporary issues of Bangladesh; published a few books so far.