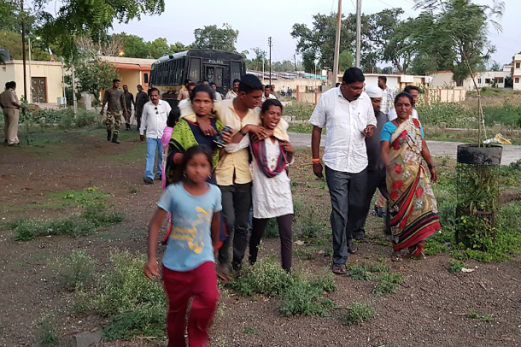 This photo taken on July 1 shows Indian women whose relatives were murdered in a lynching incident being led away from the crime scene area by villagers in Dhule district, some 330 kilometers from Mumbai. Indian police said July 2 they have arrested 23 people after five men were bludgeoned to death by a crazed mob in yet another horrific lynching to rock the country. (Photo by AFP)

India’s Supreme Court has asked parliament to introduce a new law to curb a dramatic spike in mob attacks and lynching incidents.

The top court on July 17 directed states to set up special or fast-tracked courts to conduct trials of lynching perpetrators. It also wanted lower courts to hand down the maximum punishment for crimes involving mob attacks.

The court has heard several petitions seeking its intervention in light of increasing mob violence, often triggered by fake social media rumors warning against child kidnappers and the slaughter of cows — a revered animal in Hinduism.

The court issued an 11-point prescription to states which included monitoring sensitive areas; designating police officers to prevent violence; checking the spread of fake and irresponsible news and messages on social media; and advertising the serious legal consequences of committing mob violence.

At least seven men have beaten to death this month alone in different parts of India in what rights activists called “street justice.”

Five men were killed in a single incident on July 1 in a tribal village in Maharashtra state after a mob suspected them of being child kidnappers. A 32-year-old engineer was beaten to death in southern Karnataka on suspicion of “child lifting” on July 13, and a migrant worker accused of theft met the same fate on July 16 in southern Kerala.

Rights activists like Ajay Malhotra said government inaction against the accused is giving rise to such ruthless assaults.

The increasing mob violence has a direct link to attacks by Hindu hardliners in the name of cow protection, according to Malhotra.

Mob violence has been connected to the slaughter of cows, which is banned in most parts of India. Since pro-Hindu Bharatiya Janata Party (BJP) came to power in 2014, vigilante groups have become increasingly active, purportedly to protect sacred bovines.

Official government data on lynching incidents are not available, but a recent survey from IndiaSpend, an online data journalism portal, said 33 people were killed in 69 mob violence incidents over the past 18 months, with the overwhelming majority occurring this year.

In 2017, just 11 deaths were recorded in eight such attacks for the whole year, according to IndiaSpend’s analysis. Since January 2017, 10 districts across 16 states have reported more than one case of mob violence.

Malhotra says the BJP-run federal government has failed to prevent Hindu groups attacking religious minorities like Muslims and Christians, as well as poor and socially excluded Dalit and indigenous people, who have been attacked either to protect cows or in the wake of alleged conversions.

Instead of acting against the attackers, police frequently filed complaints against the victims under laws banning cow slaughter and conversion.

“This encouraged street justice and violence against people based on rumors,” Malhotra said.

“Now anything could be a reason for attacking an innocent person on the street. Those who attack know that they have impunity to do it in present day India. This is unacceptable and merits concern,” he said.

Ankita Sharma, a blogger based in the northern state of Uttar Pradesh, suspected the mob violence was planned and staged for political benefit.

“Earlier, there used to be the videos of cow smuggling and now child trafficking videos are circulated to pit people against each other,” Sharma said.

Nikhel Dey, a rights activist based in New Delhi, said videos depicting lynching also showed insensitivity from bystanders. One such video from Uttar Pradesh state showed a man being killed over rumors of cow smuggling.

“In the video, the victim is asking for water and no-one in the mob is providing him water till he dies. What as a society have we become?” he said.