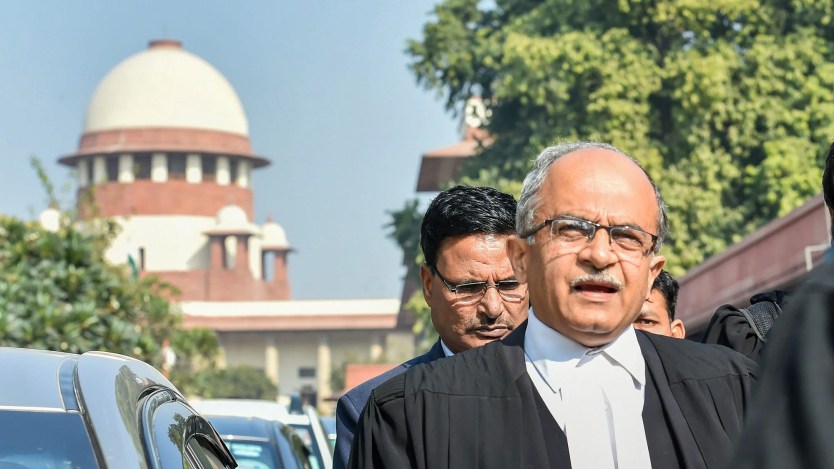 Despite a public outcry, India’s Supreme Court has convicted and sentenced prominent Indian lawyer Prashant Bhushan for “contempt of court” for having accused it of complicity in the far-right Bharatiya Janata Party (BJP) government’s assault on democratic rights.

The court’s victimization of Bhushan for his trenchant remarks is a gross attack on democratic rights.

India’s highest court found Bhushan guilty of “criminal contempt of court” for two tweets the well-known “Public Interest litigation” and civil rights attorney made in late June that criticized the court’s conduct and that of the Chief Justice of India. According to the Court, with his tweets Bhushan had sought to “to scandalize the entire institution.”

In the run-up to last week’s sentencing hearing, the three-judge Supreme Court panel that had convicted Bhushan repeatedly threatened to jail him if he did not issue a grovelling apology.

This Buhsan rightly refused to do, insisting he could not issue an apology for exercising his basic democratic right to free expression. In his written response to the court’s threat to hold him in criminal contempt, he stated that if his tweets were “regarded as a contempt, it would stifle free speech and would constitute an unreasonable restriction on the right of a citizen,” as guaranteed “under Article 19 (1) (a) of the [Indian] Constitution,” to “freedom of speech and expression.”

Under conditions where COVID-19 is raging across India, jailing the 63-year-old Bhushan would have placed his health and life in peril.

Ultimately, the court backed down, and offered Bhushan a way of avoiding jail if he paid a token fine. His lawyer promptly did this.

However, in passing sentence, India’s highest court continued to insist on its “right” to punish and jail those who criticize its actions.

The Court’s 82-page sentencing verdict conceded that India’s contempt of court law is “vague” and “colonial.” It also claimed there “cannot be any compromise” in upholding the “Right to Free Speech and Opinions.” But all this was just a crude attempt to give a veneer of legitimacy to a flagrantly anti-democratic judgement that is meant to silence opposition to the court’s role as a resolute defender of Indian big business and accomplice of the Hindu supremacist BJP.

The verdict proclaimed that when criticism of the Supreme Court’s conduct goes “beyond a permissible limit,” it has a duty to act. The court must wield “the strong arm of the law” to “strike” those who challenge “the supremacy of the law by fouling its source and stream”— that is, those who dare to criticize its anti-democratic actions.

In this case, the court gave Bhushan the option of paying a 1 rupee (1.25 US cent) fine, but not without adding that if he failed to do so by Sept. 15, he would be imprisoned for three months and “debarred from practising in this Court for a period of three years.”

What then, were the remarks made by Bhushan that so enraged India’s Supreme Court justices?

When historians in the future look back at the last 6 years to see how democracy has been destroyed in India even without a formal Emergency, they will particularly mark the role of the Supreme Court in this destruction, & more particularly the role of the last 4 CJIs (Chief Justices of India).

In speaking of the “last 6 years,” Bhushan is referring to the rule of the Narendra Modi-led BJP government. The most powerful sections of Indian big business propelled the BJP to power in May 2014 in order to accelerate the pace of pro-investor “reform” and more aggressively pursue their great-power ambitions on the global arena, above all by integrating India more fully into Washington’s strategic offensive against China.

In pursuit of this agenda, the Modi government has jailed opponents on trumped-up sedition and terrorism charges, turned a blind eye to Hindu supremacist violence, carried out a constitutional coup to strip Muslim-majority Jammu and Kashmir of its semi-autonomous constitutional status, and increased censorship of social media.

CJI rides a 50 lakh [rupee] motorcycle belonging to a BJP leader at Raj Bhavan, Nagpur, without a mask or helmet, at a time when he keeps the SC [Supreme Court] in Lockdown mode denying citizens their fundamental right to access Justice!

Here Bhushan was pointing to the glaring contrast between the privileged life of Chief Justice Sharad Arvind Bobde, a supposed motorcycle enthusiast, who could afford, in the midst of COVID-19 lockdown, to check out a Rs. 5 million ($68,000) Harley Davidson motorcycle in the hope of buying one, even while the Supreme Court was shut down, purportedly due to the COVID-19 pandemic. As a result of the lockdown, numerous constitutional challengers to the Modi government’s violation of basic democratic rights, including the imposition of an effective state of siege in Indian-held Kashmir, are in limbo. Bhushan’s post was also meant to draw attention to the chummy relations between Chief Justice Bhode and a BJP leader in Bhode’s hometown of Nagpur.

Under government pressure, Twitter denied access to both of Bhushan’s tweets in India in July, even before the Supreme Court had ruled that they constituted contempt of court.

Time and again over the last six years, India’s Supreme Court has aided and abetted the anti-democratic and Hindu communalist actions of the Modi government.

It legitimized the violent, decades-long agitation that the BJP and its Hindu supremacist allies have mounted to raze a famous mosque in Ayodhya, Uttar Pradesh, and erect in its stead a temple to the mythical Hindu god Lord Ram. Although the Babri Masjid was destroyed by BJP-incited Hindu fanatics in 1992 in express opposition to the Supreme Court’s own orders, the court handed the site over to the BJP’s allies last November and “ordered” the government to supervise the construction of a “Ram Temple.” (See: India’s Supreme Court validate Hindu supremacist violence).

The court has also repeatedly come to the government’s support during the COVID-19 pandemic, defending its ruinous handling of the pandemic and threatening the media with “fake news” charges if it doesn’t publicize government propaganda about the health crisis. (See: Amid India’s calamitous lockdown, Modi seeks to censor coronavirus reports)

The most shameful example of the Supreme Court’s complicity in the Modi government’s attack on democratic rights has been its sanctioning of its coup against Kashmir. This began with the abrogation by executive fiat of Jammu and Kashmir’s special constitutional status on August 5, 2019, and has involved mass detentions without charge, months-long curfews under the British colonial authored Article 144 of the Criminal Code, and the suspension, now into its 14th month, of internet access to the 7 million people living in the northern Kashmir Valley.

With the intent of making it a fait accompli, India’s highest court has thus far flatly refused to take up any legal challenges to the change in Jammu and Kashmir’s status and the imposition, via its division, into two Union territories, of permanent central government rule. For months, the court stalled hearing challenges to the suspension of internet service, at one point admonishing the editor of the Kashmiri Times to have faith in the claims of the government and intelligence services that it would soon be restored. Then in January, it issued a ruling that ostensibly established a constitutional right to internet access, yet gave the government a free hand to continue to deny internet access to Kashmiris. (See: India’s Supreme Court greenlights Modi government’s internet shutdown in Kashmir)

India’s judiciary, like all it state institutions, is increasingly staffed by outright Hindu communalists. Bhode’s predecessor as Chief Justice, Ranjan Gogoi, was rewarded with a nominated-seat in India’s upper house of parliament, just five months after the court under his leadership had given legal sanction to the building of a Ram Temple on the site of the razed Babri Masjid. Gogoi, who had to step down as CJI last November when he reached 65, is reportedly going to be the BJP’s Chief Minister candidate when Assam next holds state elections in 2021.

The court’s attack on Prashant Bhushan is all the more striking given his establishment connections. His father was the Law and Justice Minister in the Janata Party government of the late 1970s, and he himself was among the founders of the Aam Aadmi Party, which forms the government in the National Capital Territory, Delhi.

Clearly his criticisms struck too close to home.

While Bhushan draws a sharp contrast between the Supreme Court’s conduct over the last six years and previously, the reality is India’s ruling elite, its parties and state institutions have been lurching sharply right for decades. Modi, his authoritarian measures, and foul communalist politics are the outcome of the Indian bourgeoisie’s three-decade drive—long spearheaded by the Congress Party and supported by the entire political establishment, including the Stalinist CPM and CPI—to make India a cheap-labour haven for global capital and a junior partner of US imperialism.

Moreover, this process is paralleled around the world. The various rival nationally-based bourgeois cliques, whether led, as in France, by the ostensible liberal Emmanuel Macron, the fascistic Donald Trump, or his Brazilian ally and acolyte, Jair Bolsonaro, are turning to authoritarian methods of rule to suppress mounting social opposition and cultivating the extreme right as shock troops against the working class.

Democratic rights cannot and will not be defended, as the Stalinist CPM claims, by clutching to the tattered coattails of the “secular” Congress Party or the Supreme Court and the other putrefying “democratic” institutions of the Indian Republic.

The struggle to defend democratic rights and defeat Modi and communal reaction must be based on the working class. It must be mobilized as an independent political force, rallying the toilers behind it, against all sections and parties of the ruling capitalist elite, and by fusing the defence of democratic rights to the fight for social equality, and against war and New Delhi’s alliance with US imperialism.