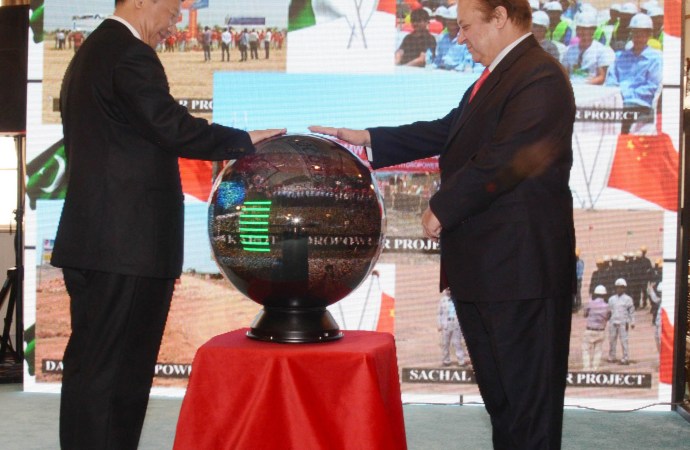 India’s commitment to non-alignment and reluctance to join the Western bloc made its relations with the United States (US) fragile and ambiguous. Suspicions, political mind-sets and mistaken ideologies are residues of the cold war period that further increased the hollowness of this relationship. On the other hand, New Delhi always struggled with the challenges of rapid rise in the relations between Beijing and Islamabad. However, amidst the current political dynamics of Asia, India today needs to reinvigorate its strategic ties with US and her allies in Asia. Multilateral security mechanism and Trans-Pacific partnership is the need of the hour to stop tipping of the scale in favour of China unilaterally. This article critically analyses the bilateral relations of Indo-US and Sino-Pak relations at the backdrop of current Asian geo-political situation.

China’s One Belt One Road (OBOR) network, growing infrastructural developments in the Karakoram Range, connecting Xinjiang to Gwadar port in Pakistan, will define economic growth in trade and commerce with Pakistan in coming days. China has continued its various investment plans and sponsoring development projects in the Pakistan Occupied Kashmir (POK) region. But this has, raised alarms in India because of China’s silently increasing presence in the Pakistan Occupied Kashmir (POK). The involvement of about 5000 construction army corps of People’s Liberation Army (PLA) in POK is discomforting India since last few years, although China has dismissed this information. China is also constructing five tunnels as a part of Karakoram highway project in POK despite India’s strict reactions and protests. This is a major concern for India as it shares her restive and porous borders with neighbouring Pakistan and China with palpable high security risk threats.

Earlier this year Chinese premier’s much talked about visit to Pakistan resulted in signing  of $46 billion infrastructural project that is about 20% of Pakistan’s current annual GDP, which includes roads, railways and power plants. It is a clearly defined strategy of China to augment its security and commercial network, to embolden its solidarity with Pakistan in order to check and balance India.

Under the present government, India is heading towards an ambitious and matured relation with US which envisages shared challenges and global vision. To define the Asia-Pacific relations US is looking forward for a more strategic presence in the region by putting its major thrust on the western pacific to Indian Ocean arc. It is apparent that US is worried about China’s increasing militarisation and reclamation policies in South China Sea (SCS) and her growing dominance in the India Ocean. To fence China in the region US is looking forward for more substantial relations and dependable defence ties with her allies. In pursuance to this US is further engaged in sharing cutting edge defence technologies, production, research and development of high technological equipment with India. The increasing convergence of interest between Indo-US relations and a multifaceted strategic partnership is all expected to embolden these security ties.

Looking into rapidly changing kinetics of Asia, especially the formation of the axis of China, Pakistan and the wild card entry of Russia into this axis, there could be a possibility of formation of a bipolar world. India’s strategic shift towards US at this crossroad is significant, decisive and favourable in nature for regional and global emergencies. The gradual distancing of Pakistan from US and Russia’s growing involvement in Asia with the Western sanctions on her compels both to join hands. Calling Pakistan her closest partner by Russian deputy foreign minister, Sergei Ryabkov to Sputnik recently somehow signals tepidness in relations with India. Amidst all this China’s growing blue water dominance, and the India factor in Sino-Pak relations, postulates India’s strategic shift towards US and to grow congruency in their relationship. However, the current world politics is undergoing a great alteration in the international relations with varying equations and strategic valence.

China eschews infiltrations of political ideologies from the outer world, moreover the character of her own political ideologies are opaque.  However, in contrast China likes to export its ideologies to the outer world in form of culture and economy to seek for privileges and to build a sphere of influence. China is rising and rising with full vigour and dominance in Asia. The word dominance here defines the elements of economic growth, security issues and a planned strategy to implement these theories pragmatically.

China’s growing assertiveness and her strategic alliance with Pakistan is a crucial combination for India. The worrisome and cloaked aspect of Sino-Pak relation is that it is formed on a shared platform of anti-Indian ideology. India and China fought in 1962 and India learnt a bitter lesson, but this event devised the strategic partnership between China and Pakistan as both had their own share of differences with India, and Pakistan was all set to utilize the vulnerable position of New Delhi at that point in time. Moreover, when USA came for India’s assistance perhaps China understood the long term significance of her relationship with Pakistan.

After the dilution of relations with US, Pakistan wanted a big brother partnership from a country which could provide Islamabad a sense of security and a counter balance to India. China is becoming Pakistan’s largest defence partner, beneficiary, supplier and a diplomatic defender in military as well as civil matters. It is noteworthy to mention here that Beijing is going up to the extent of providing Highly Enriched Uranium (HEU) to Islamabad for civil as well as military matters. The latest defence deal of 50 JF 17 aircraft, a joint venture along with nuclear capable submarines deal worth US$ 4 to 6 billion, this kind of burgeoning defence ties will certainly increase China’s regional influence and Pakistan’s dependability on China. Recently China and Pakistan conducted Shaheen IV a joint military air drill in Tibet, by this kind of exercises perhaps China is expanding her scope of strategic cooperation. However, both the countries are in a beneficial situation with China weighing more in terms of economic benefits and regional influence. Moreover, this relation seems to be more significant as centre of world politics is speedily gravitating towards Asia with China being at its nucleus.

This relationship is further reinforced with a current six lane expressway of 1,240 km road connecting Karachi and Lahore to be completed by 2017. The modernization of 1,300 km “long arm of Pakistan” i.e. Karakoram highway between China and Pakistan which China considers as a “strategic investment”. This is one of the ambitious project on upgradation which is strategically rewarding to them since it is of critical importance to China as it connects it to Pakistan by Khunjerab pass and gives strategic access to Arabian Sea. China is further helping Pakistan for building of feeder road mesh in the valleys of Gilgit and Baltistan. This mutual relationship is looking for significant economic, and military, partnership to strengthen their international and regional affair issues. China and Pakistan are also heading towards a broad consensus in the field of space technology according to the Karamay declaration under China Pakistan Economic Corridor (CPEC) project. This project will boost and promote the scientific research, technological innovations and joint research and development avenues for Pakistan. Pakistan needs China not for only economic issues but also to deter India, whereas Pakistan acts as a springboard for China’s gateway to the West.  This kind of mutual interdependency clearly indicates long term strategic partnership to attain their strategic objectives through their “all-weather friendship” formula.

The intimidation to India by USS Enterprise in the Bay of Bengal, during the Indo-Pak war (liberation of Bangladesh) in 1971, and the tenure of Kissinger and President Nixon boiled down the diplomatic work their predecessor did, the bilateral visit of President Dwight D Eisenhower to India in 1959 or the assurance and support President Kennedy provided in 1962 (Indo-China) war. The trust deficit because of US tilting towards Pakistan and India’s pro Soviet regimes widened the gap and developed estrangement between these two nations.

Indo US relations that carried a harmful historical legacy on a fluctuating trajectory of trust for so many decades finally seems to be converting in to a new association, which is moving forward with some new understandings, but still, there is a need to learn a lot from each other.

The world where lot of differences and conflicts are cropping up over water, religion, energy, territories and other resources, like mindedness of two nations with common agenda plays a very important and distinct role. The common factor between these two nations are strong functional democracy, people to people contact and a mutual global vision for peace, freedom and democracy. The visit of President Obama earlier this year and prior to that Prime Minister Mr. Modi’s visit to US can be considered as a novel chapter in Indo-US relations. The joint defence interoperability and signing of the long pending civil nuclear deal agreement in spite of deep seated differences marks a political will for converging ideas. The defence pact renewed and signed by US defence secretary, Ashton Carter this year for 10 years, consisting framework of maritime security, joint research and development of defence equipment like Raven unmanned aerial vehicles, C 130J Super Hercules aircrafts, chemical and biological warfare security devices for soldiers and intelligence sharing etc. forebodes the proximity of the strength in the strategies.

India as a prominent power in Asia and is seen as a net security provider in the region because of its democratic character, growing network of defence cooperation and military diplomacy for the maritime security in the Indian Ocean region. The term net security provider however, was first used by Robert Gates US secretary of Defence in Shangri la dialogue in 2009 for Indian maritime security support system in Indian Ocean. Truly this term defines India’s benign growth and New Delhi’s concern for global security in the region.

The dynamics in the Asia are hastening up and the volatile situation in the South China Sea is actuating, with heavy militarisation of the blue waters and declaration of Air Defence Identification Zone (ADIZ) in East China Sea (ECS) in November 2013. There is also a growing concern for China’s land reclamation activities in the SCS and a probability of ADIZ declaration in SCS too similar to that of ECS. If China declares ADIZ in SCS it would be highly antagonistic and provocative in nature. China is developing strategic ports in Sittwe, Bangladesh, Burma, Pakistan, Hambantota, and Srilanka for undisturbed energy trade and bracing India strategically. With Sino-Pak’s working strategic alliance and China’s assertive behaviour in the region, India needs to prioritize her strategic moves and long term agenda with the West.

One of the important issue for which India is pushing hard is permanent membership in United Nations Security Council (UNSC). India strongly recommends restructuring of UNSC, although, US acknowledges that but with a limited expansion, however, pragmatically which would be an inadequate geographical representation.

The highly successful cooperation with US is on Partnership to Advance Clean Energy (PACE) and significant progress on climate change have continued promotion of strengthened relations. This umbrella initiative includes a number of projects like renewable energy integration for India’s power grid upgradation a ($30 million 5 year project), partnership in improvement for climate resilience, Oceanic research in Bay of Bengal, joint munitions research, civil space cooperation etc.

The future of Indo-US relation depends on how progressively and productively both can work upon this strategic alliance to foster peace and security in Asia. Looking into China’s belligerency, and a purposeful coupling with Pakistan, India needs to hone her relations with the United States and her alliances in the region. There is a significant similarity between India and US in their strategic goals vis-à-vis China, both have strong economic engagements with China and both are ready to deter China on provocative security issues. It is true that bilateral relations rests upon strategic objectives and ties. Therefore bilateral ties are developing new strategic relations for specific objectives, whether it is Sino-Pak or Indo–US relations.