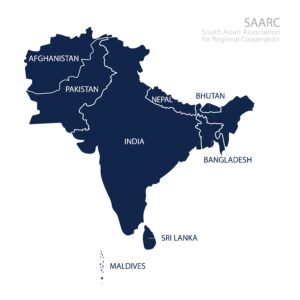 The ‘structural imbalance’ in South Asia is a contribution of geography and political history — but also has a deeper context and meaning.

As coincidence would have it, Sri Lankan Prime Minister Mahinda Rajapaksa has reopened reference to his mentioning Indian agencies working with their western counterparts for regime change in his country. Unlike his media interview after losing the 2015 presidential polls, Rajapaksa has not mentioned India’s external intelligence agency, Research & Analysis Wing (RAW) by name, since and now.

Alongside, reports have also appeared, both in the Indian and Sri Lankan media about Colombo’s rethink on involving India and Japan in the trilateral development of the Colombo Port’s East Terminal, which was clearly agreed upon by the predecessor Sirisena-Rajapaksa government in the island-nation. Though such a course was not entirely unanticipated after the Rajapaksas returned to power on November 2019, it is too early to link this to the perceived delays in Indian delay on the Sri Lankan request for a debt-moratorium and currency-swap, one way or the other.

Unlike his media interview after losing the 2015 presidential polls, Rajapaksa has not mentioned India’s external intelligence agency — Research & Analysis Wing — by name, since and now.

Reports in The Hindu, which first reported the delayed Indian response to the Sri Lankan request, has since said that the two sides discussed the same through video conference. Citing the statement of Indian High Commission in Colombo, the newspaper said that HC Gopal Baglay was conducting these talks with senior Sri Lankan officials.

Like Sri Lanka’s Mahinda Rajapaksa, Nepal Prime Minister K.P. Sharma Oli too has gone on to allege that New Delhi was now “trying to topple my government.” In doing so, Oli has digressed vastly from his unilateral decision and ‘enforcement’ of bilateral borders, which were a subject of negotiations for long. Though on a positive note, a third Indian neighbour, Bhutan ended up having to deny reports that they had not stopped waters flowing into the Northeastern state of Assam.

Independent of the specifics involved, and more so, the larger Chinese border violence, India suddenly finds itself caught in a series of issues with smaller neighbours, all over again. This seems to be periodic and cyclic. Earlier this year, thus, Bangladesh, perceived as the most trustworthy of neighbours at present, reacted strongly to India’s Citizenship Amendment Act (CAA) and even cancelled ministerial visits.

Though on a positive note, a third Indian neighbour, Bhutan ended up having to deny reports that they had not stopped waters flowing into the Northeastern state of Assam.

All three nations are said to be moving closer to China — on the economic front in the case of Bangladesh and Sri Lanka, and politically, too, for Nepal. There are reasons to believe that the Chinese provocation at the Doklam tri-junction (2017) was also aimed at telling Bhutan where to draw the line in its dependence on India.

The problem is mutual, and not one-sided, as either side may think in terms of bilateral ties with India. Size and perceptions matter the most. India is uniquely placed in terms of its neighbours unlike many other nations of its size elsewhere, in terms of area and population, economy and military, global political-reach and ability to swing world opinion in favour of its neighbours, when sought and/or expected.

This ‘structural imbalance’ is a contribution of geography and political history, but has a deeper context and meaning. The Indian strategic community often misses the point. This has led to differences in perception. When India and Indians think, talk and act like an ‘elder brother’ in the region, they are mistaken for a proverbial ‘big brother’ instead. Attempts to revisit the past and re-calibrate the relations for the future have not helped, owing to those very differences in perceptions.

When India and Indians think, talk and act like an ‘elder brother’ in the region, they are mistaken for a proverbial ‘big brother’ instead.

Not a team player

In the regional, bilateral context, India is not seen as a team player in geostrategic, geopolitical and geo-economic terms, leave alone as the team leader that it otherwise is. In the Cold War era, the world accepted South Asia (barring Pakistan) as the ‘traditional sphere of influence’ for India. New Delhi too perceived itself as such but neighbours who alone matter in this case did/do not see it that way.

In the neighbourhood, India is often seen as taking ‘unilateral decisions’ geopolitical and geostrategic matters without consultation or communication with the smaller neighbours for whom the Indian decisions matter even more. India’s Cold War era ‘friendship and cooperation treaty’ with the erstwhile Soviet Union (August 1971) and the post-Cold War ‘Indo-US defence framework agreement’ (June 2005) are often cited as prime examples of India’s unilateralism.

In nations like Sri Lanka, the political leaderships felt hurt and slighted while the strategic community point to the ways India’s decisions have affected the geostrategic situations for them even more. For instance, they contextualise the 10-year year Indo-Soviet treaty of 1971 (extended by another 10 years) to the period in which Sri Lanka led the IOR call for making Indian Ocean a ‘zone of peace.’

In the Cold War era, the world accepted South Asia (barring Pakistan) as the ‘traditional sphere of influence’ for India.

According to a section of the strategic community in India’s immediate IOR neighbourhood, New Delhi’s unilateralism on issues of joint security concerns had accentuated their nations’ inherent sense of inadequacy into one bordering on insecurity. In defence, they have fallen back on larger, non-regional players like the US in the Cold War era and China, post-Cold War, as a kind of ‘self defence’ mechanism.

In Sri Lanka, the 1971 Accord is also mentioned as a cause for Colombo providing refuelling facilities to Pakistan Air Force (PAF) at the height of the decisive, 16-day ‘Bangladesh Liberation War’ in December that year. This, Sri Lanka did, even after IAF had rushed to Colombo’s aid when the ‘First JVP insurgency’ of the militant left had taken the nation by surprise, only months earlier, in June 1971.

As India’s economic situation vastly improved in the reforms era since 1991, coinciding also with the post-Cold War period, New Delhi came to be seen as much assertive in the neighbourhood as it was accommodative. In 1989, a couple of years before the commencement of the reforms, India denied access for Nepali trade at Calcutta port, after Kathmandu unilaterally decoupled the currencies of the two countries. In 2015, the Nepali state saw New Delhi’s hand behind the two-month-long pro-India Madhesi-blockade that led to shortages in the Himalayan republic.

Bilateral relations improved after the change of government in Thimpu, especially over the ‘Doklam issue’ when Bhutan sought and obtained Indian help to fend off Chinese intrusion.

Ahead of the 2015 parliamentary polls in Bhutan, India’s public sector oil companies stopping subsidised petroleum-product supplies to Bhutan was seen as an indirect way of influencing the local voters against the incumbent government. Bilateral relations improved after the change of government in Thimpu, especially over the ‘Doklam issue’ when Bhutan sought and obtained Indian help to fend off Chinese intrusion.

For the first time in neighbourhood relations barring those with Pakistan, India reacted strongly to ‘democracy issues’ in Maldives in February 2018. That was after President Abdulla Yameen proclaimed emergency and arrested two Supreme Court judges for ordering freedom for former President Mohammed Nasheed and other ‘political prisoners’ in the country.

In retaliation, Maldivian Foreign Ministry cautioned India against ‘interfering in the country’s internal affairs.’ Senior Minister Mohamed Shainee added that Maldives was not commenting on the ‘Kashmir issue’ and India should do likewise on his nation’s ‘internal matters.’ Later that year, India in another possible first in neighbourhood relationship, denied entry for Ahmed Nihan, Leader of the House in Maldivian Parliament under Yameen’s regime.

However, it was in the case of neighbouring Sri Lanka that India’s self-assertion came out in the open, when it voted for the US-led resolution for a ‘war crimes probe’ at the UNHRC, in March 2012. According to Sri Lankan observers at the time, an Indian vote against the resolution would have roped in fence-sitters in the nation’s favour, obliterating the western demand for a probe of the kind.

Sri Lankan analysts claim that a respectable defeat for their nation in UNHRC 2012 became possible only at the last-minute intervention of China. Independent observers say that China influenced ‘client states’ elsewhere, to vote in favour of Sri Lanka. Even without it, smaller neighbours with questionable track-record on human rights and related issues of the kind on their home front, will be in eternal need of a veto-vote in the UN Security Council.

They now may have China and Russia, but not India, as the hopes ad promises in this regard are way away from becoming a reality. However, in in the years before India’s 2012 vote in the UNHRC, they all saw India as being capable of swinging a vote in their favour, hence rendering the need for a veto, redundant.

Independent of economic aid (or, debt trap), India’s neighbours with their own domestic issues and perceptions of India’s ‘interference in their internal affairs,’ see in the US earlier and China now, an unquestioning sure-fire supporter at international fora like the UNHRC and the UNSC, if needed. Their inherent, institutionalised views on India’s ‘unilateral strategic decisions’ on the security front, has only hastened the process — a medium and long-term concern that India needs to address still.