Siva Kumar, centre, with his colleagues in 2018. Photo: Siva Kumar
Siva Kumar, 27, has spent the past four years working an array of roles, from designer to operations manager, for Chinese e-commerce companies in
India. But all that changed in late April when he lost his job after the company he was working for decided to exit India’s IT hub of Bangalore, due to global logistics disruptions from the
Covid-19 pandemic and rising anti-China sentiment as the nuclear-powered neighbours remain locked in a stand-off at their Himalayan border

“Now I have decided to start my own programme from scratch,” Kumar said.

“As a normal boy from a tier-two city who didn’t go to IITs, I don’t feel optimistic [about] finding a role in Indian companies where I can fully contribute my value,” he said, referring to the country’s 23 Indian Institutes of Technology (IITs). He holds a degree in computer science from a less-well-known engineering college in Coimbatore, in his home state of Tamil Nadu.

As India’s start-up ecosystem is largely dominated by graduates from the IITs, Kumar thinks his résumé “may not fully show my potential”. He is among the estimated several thousand Indian workers that have lost their jobs at Chinese firms – mostly tech companies – this year.

Over the past five years, India, with its mostly young population of 1.3 billion, has been the go-to market for Chinese companies looking to expand overseas. Since 2015, Chinese tech giants such as Alibaba  – which owns the Post – and  Tencent
have invested in a dozen Indian unicorns, the term used for companies with valuations above US$1 billion, making the country a primary strategic market.

and Helo all had hundreds of millions of users in India before New Delhi’s crackdown on Chinese apps. In addition, the Chinese companies Club Factory and SheIn also enjoyed considerable market share in India’s e-commerce industry.

According to data and analytics firm GlobalData, Chinese investments in Indian start-ups grew from US$381 million in 2016 to US$4.6 billion last year. In 2018, four Chinese apps were among the top 10 most downloaded apps on Google Play India, and made up 44 of the top 100.

India and China gear up for a new battle, this time over water

However, during the pandemic and ongoing border dispute, New Delhi has pulled back sharply on Chinese investments. From June to November, the Indian government banned a total of 267 Chinese apps – including TikTok and PUBG – for what it said were “national security” issues. It also began tightening scrutiny of Chinese foreign direct investment by mandating “prior approval” for investments from countries that share a border with India.

As a result, there has been a sharp decline of Chinese investments in India. In August, Alibaba reportedly decided to put off expanding its investments in the country for at least six months. Chinese telecoms equipment maker
Huawei

has slashed its India revenue target for 2020 by up to 50 per cent.

Is this the end for India’s last Chinese-language newspaper?

Although some companies like Alibaba closed their operations in India after their products were banned, some Chinese tech companies, including Huawei and Kumar’s former employer, are cutting back on employee numbers simply because of poor business prospects.

Moreover, companies such as ByteDance, which owns TikTok and Helo, are yet to resume service after the app bans were introduced six months ago, although neither company has laid off any employees, according to a source with knowledge of the matter. 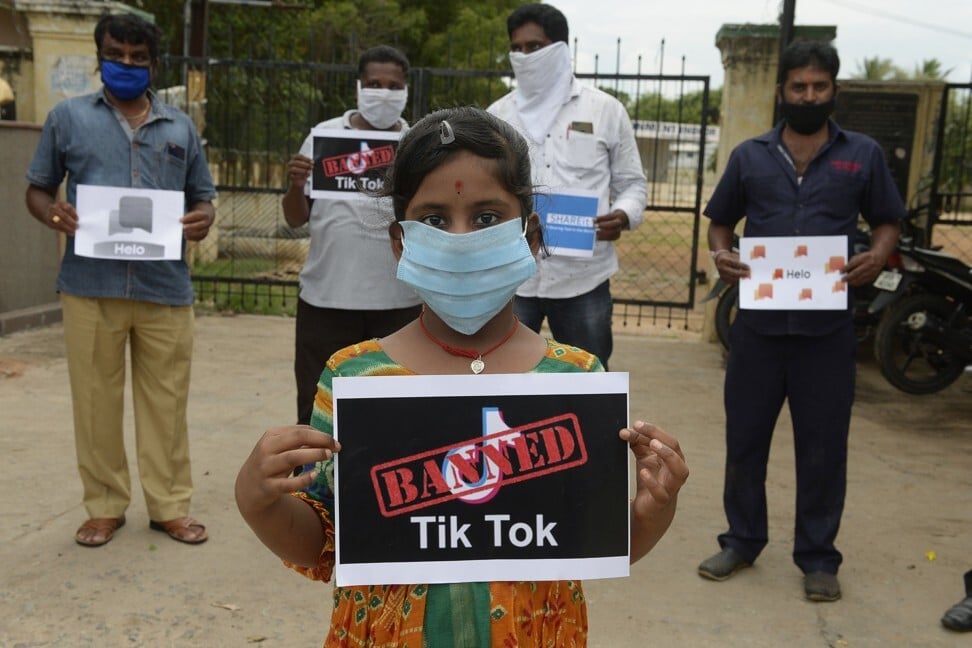 Members of a youth organisation in Hyderabad hold posters with the logos of Chinese apps in support of the Indian government’s ban on them. Photo: AFP

As Chinese tech companies have left the market, Indian competitors have stepped in to fill the void. Soon after TikTok and other Chinese short video apps were banned in India, about a dozen local alternatives were launched, and several of them have attracted investments.

Ramakrishna Velamuri, professor of entrepreneurship at the China Europe International Business School in Shanghai, said there would be no difficulty for employees to find jobs with these Indian companies.

Many US-based start-ups are hiring more, because we are seeing opportunities from them to work remotelyEmployment agency Meyrahkee

According to Swati Khanna, founder and CEO of tech industry employment agency Meyrahkee, hiring in India has actually picked up since the start of the pandemic because of the change in the global landscape. “Many US-based start-ups are hiring more, because we are seeing opportunities from them to work remotely.”

Velamuri said there would be plenty of opportunities even for graduates of less well-known Indian universities.

For Kumar, the Tamil Nadu native, that may not necessarily be the case. He recalls starting out at an Indian cross-border e-commerce company in 2016, doing product design until he was soon roped into marketing. He would reach the office at 6am and leave at 9pm.

“That gave me a chance to learn how to build everything from zero,” Kumar said.

‘Fear of China’ pushing Australia and India towards trade pact

After a year, though, he left the company and subsequently worked for three different Chinese companies, with his salary tripling over four years. His last job was working as an operations manager before he was let go in April.

While Kumar was offered a job with a Chinese manufacturing company, it required him to move to the capital, New Delhi, so he decided to forego it. Instead, he is now trying to start his own sports equipment and clothing brand, working with a few friends in Chennai.

“Instead of having a 9-to-6 job in an Indian company, I would rather try something on my own,” Kumar said. Recalling his time working for the Chinese companies, which included travel to China, he said: “I have learned so much in Chinese companies, the hard working and team culture – [it is] more valuable than just money.”