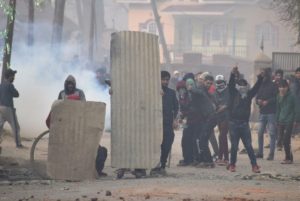 November marked the bloodiest month to date in 2018 in Indian Kashmir with at least 47 people killed, including 37 militants, as security forces stepped up an offensive in the disputed Himalayan region, police said Friday.

Among the suspected rebels killed was Naveed Jat, 22, a top member of Lashkar-e-Taiba (LeT), a Pakistan-backed militant group.

“His killing is a major blow to the Pakistani terror group, which has been struggling to revive its base here after its top operatives were neutralized in gunfights in the recent past,” Ravideep Sahi, inspector-general of the Central Reserve of Police Force (CRFP), told BenarNews, referring to Jat.

“It is a major success for the security forces this year,” he said, emphasizing that November was the deadliest month so far this year.

Security forces gunned down Jat, a Pakistani national, along with an aide in Budgam district in Central Kashmir on Wednesday

Authorities alleged that Jat was involved in a series of attacks on security forces, and in the killing of a noted Kashmiri journalist Shujjat Bukhari in June.

“Pakistan is pushing in more militants into Kashmir to intensify terror activities in the region,” Sahi said.

Since the partition of the Indian Sub-Continent in 1947, India and Pakistan have been locked in a territorial dispute over predominantly Muslim Kashmir. A de facto border called the Line of Control divides Kashmir, which is claimed in its entirety by both sides.

An outbreak of insurgency on the Indian side has claimed more than 70,000 lives since the late 1980s. A majority of the fatalities have been civilians.

India, which has deployed about 500,000 soldiers in the territory it controls, accuses Pakistan of arming and training Kashmiri rebel groups, but Pakistan denies the charges.

The spike in gunbattles between security forces and militants this month forced businesses to remain shut for more than a week, causing frustration among store owners.

“I want peace. The shutdowns, which are periodically ordered by the separatists, is ruining my livelihood,” Mushtaq Ahmad, a shopkeeper, told Benar News.

His comments came after separatists forced shops and businesses to shutdown in Shopian district after four militants and a soldier were killed in an attack last week.

External Affairs Minister, Sushma Swaraj warned that India would not attend the coming summit of the South Asian Association for Regional Cooperation (SAARC) and said New Delhi would not hold a dialogue with Islamabad “until and unless” Pakistan stopped sponsoring terror.

Her remarks came a day after Pakistan said it would invite Prime Minister Narendra Modi to the SAARC summit.

“Bilateral talks always say that terror and talks cannot go together. The moment Pakistan stops all terrorist activities in India, the dialogue can start,” the PTI news agency quoted her as saying Wednesday.

“Things will be brought into control and are being brought under control, but sustained pressure needs to be maintained,” he said in New Delhi.

The firefights and subsequent closing down of schools have also affected school children.

“Our exams are approaching but we have still more than 40 per cent syllabus to be taught,” said Suhail Ahmad, a senior student from Anantanag district, where six militants were killed on Friday.

“Nobody knows when the shopkeepers are asked by the terrorists to put down the shutters or the schools are asked to shut down,” he told BenarNews, complaining that schools were closed for at least seven days this month.

Most of the recent gunfights took place in south Kashmir, considered a hotbed of militancy, police said. Gunbattles killed 40 people, including 19 militants, in April this year.

In June this year, the United Nations issued its first-ever report on human-rights violations in the region, slamming India and Pakistan for alleged abuses in areas they rule and called for a major investigation into such violations.

In the 49-page report, then-U.N. rights chief Zeid Ra’ad al-Hussein described “a situation of chronic impunity for violations” committed by security forces from both sides.