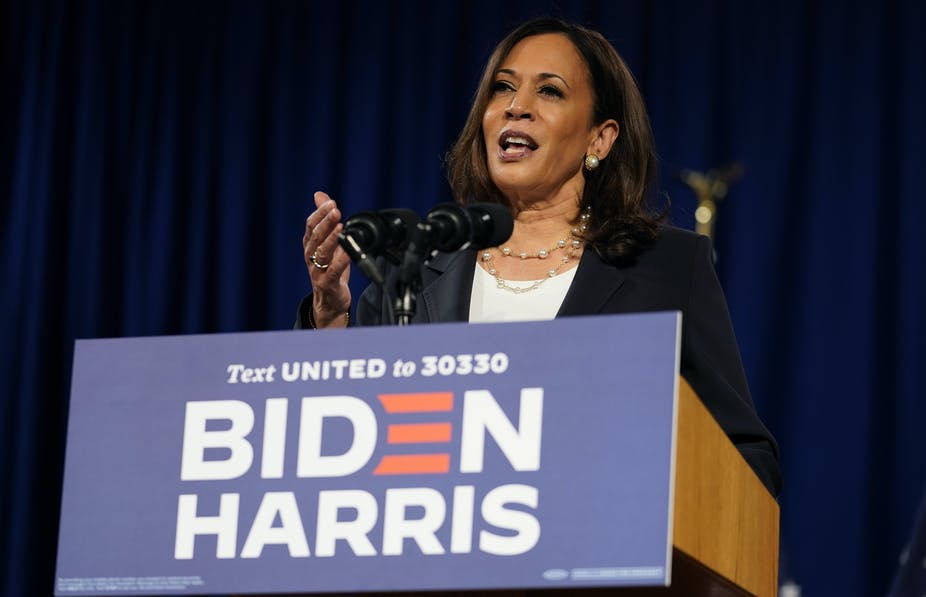 Senator Kamala Harris being picked by Joe Biden as his running mate has put a spotlight on the Indian American community in the United States.

The interest, in part, stems from her origins: Her mother, Shyamala Gopalan, was a biologist from the Indian city of Chennai. Her father, Donald Harris, an economist, was from Jamaica. After her parents divorced, her mother raised Kamala Harris and her sister as members of the Black Church. But her mother also took Harris to Hindu temples.

In her memoir Harris writes about her Indian origins.

I am a political scientist of Indian origin who has followed the rising trajectory of Indian Americans in American politics.

Though Indian Americans constitute a mere 1.5% of the population their impact on American politics can be disproportionate. Indian Americans are among the wealthiest and most educated of all immigrant groups in the U.S.

The question is: How exactly do they vote?

At 4 million, Indian Americans are one of the fastest growing immigrant groups in the United States and the second-largest immigrant group after Mexicans.

The community, however, started with modest numbers, owing to severe restrictions on immigration prior to the the passage of the landmark Immigration and Nationality Act of 1965.

This legislation, that ended immigration on the basis of national origins and prioritized highly skilled workers, led to a dramatic increase of immigration from Asia. A disproportionate segment of those who formed the first wave of migrants were middle class professionals – doctors, educators and managers.

In 1957, Dalip Singh Saund became the first Asian American to be elected to the U.S. House of Representatives, coming from a district in southern California. A naturalized U.S. citizen of Indian heritage, he was subsequently elected for two more terms before he suffered a stroke in 1962 and was too ill to run again.

Indian Americans were a minority in Saund’s constituency – California’s 29th District – which includes part of Los Angeles County. Saund pursued a campaign that could overcome widespread suspicion, distrust and even outright hostility toward immigrants from South Asia.

Being a high-earning and educated immigrant group makes Indian Americans a very attractive pool of potential donors for political campaigns. In the current election season they have emerged as significant donors. Not surprisingly, both Republicans and Democrats make ardent efforts to court them especially in highly contested regions.

Since the days of President Ronald Reagan, the Republican Party had tried a “big tent” strategy, an effort to accommodate people of various political leanings. That, however, is no longer the case, especially under President Trump.

The approach was ostensibly designed to broaden the appeal of the party especially to hitherto marginalized communities and immigrant groups of color including those from various developing nations as well as Hispanics.

The party did attract particular individuals of Indian American origin who rose to positions of considerable prominence, such as Bobby Jindal, the former governor of Louisiana, and Nikki Haley, the erstwhile American ambassador to the United Nations whose parents emigrated to the U.S. from Punjab.

However, the party could not genuinely broaden its Indian American base across the country. Both these individuals also distanced themselves from their religious roots by converting to Christianity.

Particular episodes also alienated Indian Americans from the party. In one such episode in 2006, George Allen, a former Republican senator from Virginia, while running for office during a campaign rally referred to a young Indian American as Macaca, a certain species of monkey. “This fellow here, over here with the yellow shirt. Macaca or whatever his name is. He’s with my opponent, he’s following us around everywhere,” he said.

The incident, which attracted media attention, has long since rankled members of the community. Some affluent Indian Americans do tend to vote for the Republican Party.

When Trump visited India in February 2020, he received a huge reception especially at an extravaganza organized in Indian Prime Minister Narendra Modi’s home state of Gujarat.

However, a majority of Indian Americans either identify with the Democratic Party or lean Democratic politically.

[Deep knowledge, daily. Sign up for The Conversation’s newsletter.]

The same survey also shows that there are 1.8 million Indian Americans, whose vote in crucial swing states ranging from Arizona to Wisconsin could help tip the election one way or another.

There may be several likely explanations for the overwhelming level of support among Indian Americans for the Democratic Party. For the past several decades, Democrats have been more welcoming of immigrants and minorities. And most Indian Americans tend to have more liberal political leanings. It may be worth noting that as many as 84% of the Indian American community had voted for President Obama.

Whether the same trend is repeated is yet to be seen.

Sumit Ganguly, Distinguished Professor of Political Science and the Tagore Chair in Indian Cultures and Civilizations, Indiana University
This article is republished from The Conversation under a Creative Commons license. Read the original article.