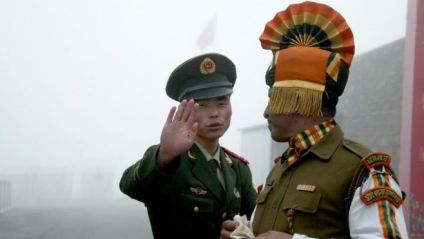 The face-off between Chinese and Indian troops in the Sikkim section of the Sino-Indian border seems to be escalating. The Indian military was quoted by Indian media as saying that more troops have been deployed there in a non-combative mode. Indian Defense Minister Arun Jaitley claimed that the India of 2017 is different from the India of 1962. Chief of Staff of the Indian Army, General Bipin Rawat, even said they are fully ready for a two-and-a-half front war – referring to China, Pakistan and internal security requirements.

Indian troops have trespassed over the China-Sikkim border, which is viewed as having already been demarcated, and is not a line of actual control. The Indian side has changed arguments several times, first claiming that “China intruded onto Indian territory,” but later saying “there was no incursion into our territory,” followed by the new excuse that India is helping Bhutan safeguard its territory. India is acting shamelessly before the international community. 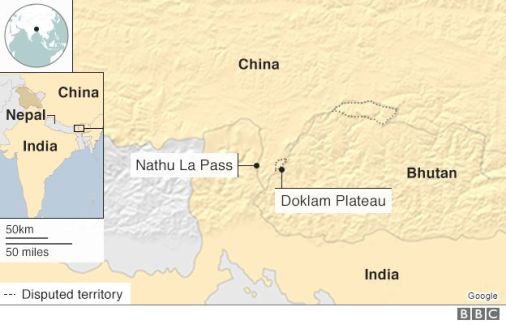 New Delhi’s real purpose is to turn the Donglang area of China into a disputed region and block China’s road construction there. The Cold War-obsessed India is suspicious that China is building the road to cut off the Siliguri Corridor, an area held by Indians as strategically important for India to control its turbulent northeast area. India is taking the risk to betray the historical agreement and wants to force China to swallow the result.

India should look in the mirror. It was not able to refute the evidence of illegal border-trespassing and coerced its small neighbor Bhutan to shoulder the blame. India has long treated Bhutan as a vassal state, a rare scene under modern international relations. India’s illegal border intrusion is not allowed by international law; besides its suppression of Bhutan must be condemned by the international community. The Indian media claimed in recent days that New Delhi “shouldn’t abandon Bhutan.” India is humiliating the civilization of the 21st Century.

The Chinese public is infuriated by India’s provocation. We believe the Chinese People’s Liberation Army is powerful enough to expel Indian troops out of Chinese territory.

We firmly believe that the face-off in the Donglang area will end up with the Indian troops in retreat. The Indian military can choose to return to its territory with dignity, or be kicked out of the area by Chinese soldiers.

If New Delhi believes that its military might can be used as leverage in the Donglang area, and it’s ready for a two-and-a-half front war, we have to tell India that the Chinese look down on their military power. Jaitley is right that the India of 2017 is different from that of 1962 – India will suffer greater losses than in 1962 if it incites military conflicts.

China attaches great importance to domestic stability and doesn’t want to be mired in a mess with India. But New Delhi would be too naïve to think that Beijing would make concessions to its unruly demands.

Instead of taking immediate action, China still wants to address disputes by peaceful means, a practice that has been maintained for decades, and it is unwilling to face a pattern of confrontation in the border area. But a peaceful solution must lead to legitimate and justified outcomes. We hope India can face up to the hazards of its unruly actions to the country’s fundamental interests and withdraw its troops without delay.

We need to give diplomatic and military authorities full power to handle the issue. We call on Chinese society to maintain high-level unity on the issue. The more unified the Chinese people are, the more sufficient conditions the professionals will have to fight against India and safeguard our interests. This time, we must teach New Delhi a bitter lesson.