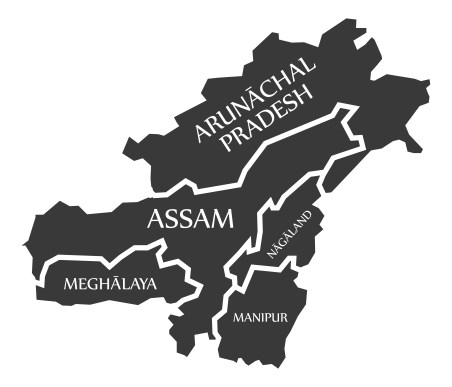 As the alternate media expands its reaches to hundred thousand Indians across the country, thanks to the increasingly cheaper internet connectivity, its restraint, and liability also start surfacing in
Public discourses. The limitation and gradually losing credibility of the mainstream media may pave the way for a boosting alternate media, but it is still miles apart from the trustworthiness among users.
In fact, voluminous media coverage in Assam following the relentless rumor continued uncertainty, and inherent fear had recently resulted in the elimination of two innocent lives along with severe injuries to
few others and also stranding of thousand railway passengers for days in different isolated locations.

The rumor of incorporating many parts of Assam including the Dima Hasao district in the greater Nagaland (Nagalim) continued to hunt The people of Assam since the virtual end of Naga movements. The proposed Nagalim continues to claim many areas of Arunachal Pradesh, Assam, Manipur and also northern Myanmar localities. The uncertainty over the government actions remains fully intact as
The content of Naga Framework Agreement is yet to be made public. The Union government in New Delhi signed the agreement on 3 August 2015 with the influential Naga armed outfit (Nationalist Socialist Council of Nagaland-IM), when Prime Minister Narendra Modi himself announced
the peace deal through the social media.

With this background of anxiety and worries, a report was published ina reputed portal (https://thewire.in/215195/revealed-rss-draft-plan-nagaland-accord/) indicating that Dima Hasao district in central Assam may be Incorporated in Nagalim. The contributor Sangeeta Barooah Pisharoty in her report titled ‘Revealed: RSS Draft Plan for Nagaland Accord’ quoted Jagdamba Mal, an understood Rashtriya Swayamsevak Sangh (RSS) ideologue based in Nagaland for decades and tried to authenticate it. The trouble-stricken Dima Hasao, which is an autonomous district constituted under the sixth schedule of the Indian constitution, home to the Dimasa tribe people with a sizable Naga population. Since the Eighties, the district witnessed various ethnic insurgent outfits and most notorious was the Jewel Garlosa led Dima Halam Daogah, which once terrorized the entire district.

The content of TheWire might have reached too few readers, but the same story was reproduced by a section of local (read Assamese) newspapers and satellite news channels to attract the attention of
Hundred thousand residents of the State. Soon the resentments among the Dimasa people about their inclusion in Nagalim surfaced and it grew abruptly.

Various agitating Dimasa groups including the Jadikhe Naisho Hoshom, All Dimasa Students Union, Dimasa Mother Association, and Dimasa Women Society etc. called for a series of protest rallies across the hills where the local political party representatives also Participated. The agitators demanded a clarification from the governments over the matter at the earliest.

One such public protest in front of Maibong railway station on 25 January turned violent. The police resorted to firings as the protesters started vandalism at the railway properties. Two tribal
agitators namely Mithunjay Dibragede and Prabin Hakmaosa were killed in police firings, whereas ten others received injuries. The killings were condemned widely, and strikes continued in the district for days which resulted in stranding of thousand railway passengers from southern Assam with Tripura to Guwahati.

Amidst the chaos, Assam chief minister Sarbananda Sonowal invited a group of Dimasa civil society representatives and reiterated the government’s stand that not a single inch of Assam land would be ceded. For Nagalim. Assuring the delegation of civil society groups in presence of Dima Hasao Autonomous Council chief Debalal Garlosa on 30 January, Sonowal categorically stated that the State’s territorial integrity would not be harmed.

Mentioning about his telephonic conversations with the Union home minister Rajnath Singh, the chief minister declared that even no satellite council or special development authority of Nagalim would
Also, be allowed in Assam. Sonowal informed that necessary steps were taken to provide appropriate government jobs to close relatives of both the victims (of police firings) and free treatment to those
injured in the incident.

The State government has already constituted a one-man committee headed by the State’s additional chief secretary VB Pyarelal to inquire into the circumstances that led to violence and subsequent
Police firings. Public anger however continued for days and it was visible in a massive protest rally organized at Maibong locality later in the presence of AASU adviser Samujjal Bhattacharya, ABSU general secretary Pramod Boro with many others.

Jagdamba Mal, who is facing a formal police complaint in Assam, later clarified that he put some suggestions to settle the six decades long Naga antipathy, but the concerned reporter blew the
content ‘out of proportion.’ Mal declared that he was not an RSS member. So his suggestions were ‘nothing to do with the RSS or the BJP governments.’

India, out of its over one billion population, houses nearly 200 Million smart-phone users. As the internet connections turn relatively cheaper in the country, more and more upper and middle-class nationals start possessing the net connection, and it finally helps to grow some alternate media browsers.

Meanwhile, expressing serious concern over the recent unpleasant incidents in Dima Hasao following few media contents, a scribe’s forum appealed to the common people to be judicious overreacting to media Reports. Demanding a regulatory authority over the alternate media, the Journalists’ Forum Assam (JFA) also urged the government to empower the press council with the inclusion of electronic and social media.

“While the concerned portal should have reported the matter with the right perspective, the vernacular news outlets must have authenticated the facts before publishing the news item,” said Rupam Barua, president of JFA.

He also added that those newspapers might have recognized the news portals as trustworthy as the established news agencies and so found it logical to use the content of the portal over a sensitive issue
without verification. Once we have a powerful media council, Barua asserted that this kind of flaws could be addressed more efficiently.